The Castlebar Book Club choices for February/March were ‘On Chesil Beach’ by Ian McEwan and ‘The Book Thief’ by Markus Zusak. 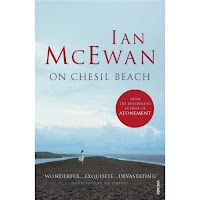 I loved ‘On Chesil Beach’, hell I suggested it to them.
The level of detail and intimacy in it reminded my of McEwan’s slightly earlier novel ‘Saturday’. Both these books blew me away on account of the often-microscopic eye the author brings to bear on the lives and affairs of his characters.

Both books also have something else in common.

In both cases, the stories roped me in, enthralled and ‘convinced’ me. However, in the cold light of day, when all the reading was done and the writer’s hold over me was broken, then the resolutions in both books left me something less than convinced.
In ‘On Chesil Beach’, a naive misunderstanding leads to far-reaching consequences (a bit of a recurring theme in McEwan’s writing methinks).
It’s just that those far-reaching thingies were just a little too ‘far-reaching’ for my credulity to bear.
Nonetheless, this is an excellent, slender, thoughtful read (with a little graphic content, so be warned) and I commend it unto you.

‘The Book Thief’ is a good read too.
It took me quite a while to get through it – I don’t really know why because it’s not particularly dense or demanding.

It covers similar ground to the central part of ‘The Tin Drum’ by Günter Grass.
The heroine, Liesel, is a little girl who is adopted into a German family after her parents are taken to a concentration camp. Her adventures on Himmel Street during the burgeoning war makes for a well-written and entertaining story.

For me, her experiences came across a little like ‘World War 2 Lite’.

Although the effects of the war and of Hitler’s tenure are not flinched away from, the conceit of using a narrator who views the events from an elevated vista somehow removes a layer of reality from the events described.
One always feels one is inside a story rather than inside any kind of reality.

The fact that the narrator is ‘Death’, ‘The Grim Reaper’, (whatever you call him) seems to be neither here nor there. This device, for me, only serves to delay the reader's entry into the story and, as it constantly reasserts itself, the story remains oddly remote.
The ending of the book (no spoilers, don’t worry) provided a satisfying conclusion to the story.
This was a book which I looked forward to getting back to and that is a commendation in itself.
Perhaps not quite as good as the wealth of glowing reviews which adorn its covers, this is still one to enjoy.
Posted by Ken Armstrong at 23:05:00

I keep meaning to read some McEwan, but the only thing in the library is On Chessil Beach and I'd been avoiding it because of all the negative reviews I've seen. Is this a good one of his to start with, though?

Oddly enough, I started reading The Book Thief this morning, so thanks for not putting in spoilers! I'm only just into the first chapter and already the frequent headings and interlocutions by Death are bugging me a little; they seem too much of a forced conceit. I'm hoping that, as you say, the story picks up and it gets easier to ignore the fact it's narrated by Death.

Stick with The Book Thief - that first part takes a little getting over but a more comfortable narrative structure soon sets it. Let me know what you think of it, eh?

On Chesil Beach is a good enough one to start with. Forget the negative reviews, I think it's a fine book and I'm never wrong :)
'Saturday' is my favorite of his...