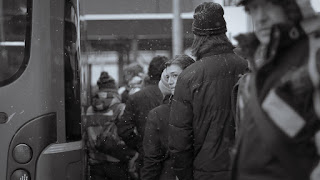 When it comes time for such a thing to happen, I think I’m going to find it quite hard to get back within two metres of random people. I’ve observed the rules stringently all along. It’s going to take some doing to re-programme myself.

Over these past months, I’ve always tried to do my social distance thing with a smile, a merry jape. “Don’t mind me, I’m just trying to protect you whatever dreadful lurgy I might be harbouring. Here, have a grin. Now move on.”

The other evening was the one exception to this rule. A glitch. A one-off. What can I say? I lost it a bit. Sorry about that. It won’t happen again. Etc.

What happened? Okay. I was queuing outside Tesco, two metres from the person in front, two metres from the person behind, you know the drill. We were moving along at a nice pace. All good. A car pulled up at the kerb edge beside me and a middle-aged lady climbed out of the passenger seat. She was totally engrossed in her mobile phone call. She slammed the car door and it drove off. She turned and joined the queue. Not at the back, though. In the middle of the queue. Beside me. Right beside me.

She kept talking into her phone, “yes, yes, I know, I know, yes.” She didn’t seem to be aware that she had blithely jumped a socially distant queue and was now positioned something less than 6 inches away from my face.

“Would you mind stepping back a bit. You know, for_”

“If you could just step back a lit_.”

“You cheeky sod. You little bastard. I have no Covid.”

It happens sometimes. Less and less, as I get older, but it still happens. It happened then. I lost my patience. I had a little rant.

“I guess this is exactly what you needed, you daft bint. What was it: were you a bit bored just sitting at home? “Drop me into town in the van, Martin, and I’ll queue up at Tesco and pick a fight with some poor bastard who’s been working hard all bloody day and just wants to get some dinner and go home. Oh, and I can ring up Mary while I’m at it. Kill two birds with the one stone."?”

The queuing people seemed to enjoy it.

The belligerent lady took two steps back from the now-belligerent gentleman. “There. I’m away from you now? Are you happy now? You arsehole, you skitter.”

“What about that poor woman right beside you? Are you away from her too?”

In fairness, the ‘poor woman’ behind me in the queue, who was now less than six inches away from the belligerent lady, seemed appalled to be dragged into the affair. She held her peace though.

The belligerent lady seemed to be casting around for a suitable response. She finally came up with one.

I turned away then and focused myself on some polite queuing. Behind me, the abuse kept coming although, strangely enough, ‘Mary-on-the-Phone’ might have been backing me up a bit because the lady interspersed her offensive remarks to me with consolatory words into the phone, “I know, Mary, I know a lot of people have died...”

We’ve all done pretty well with what’s been thrown at us, but it’s been a pressure cooker situation and I fear we are not done with it yet. Some of us may think it hasn’t touched us, but it has, in all kinds of ways.

I’m not trying to be funny here nor tell a merry tale. I just wanted to set it down. Reading it back actually makes me feel a little sick in my stomach. I feel that I failed miserably in that situation and pretty-much let myself down.

Inside the store, I saw the woman who had been standing behind me in the queue. I apologised for my loss of patience and for involving her in my verbal melee. She assured me it was quite all right and that she took all that kind of thing with a pinch of salt. Two things struck me about that, when I thought about it afterward.

Firstly, I need to take more things with a pinch of salt. Like that lady does.

And secondly, in that good lady’s eyes, I was as much the fool and the idiot as that belligerent woman was. I momentarily became part of the problem rather than part of the solution. The belligerent lady needed to be told, to be set straight, but I didn't need to go off on one to do it.

Social distance, I guess, isn't just about keeping away from people, it's also about forgetting how to behave.

I must try to do better.