Off-Grid in My Back Yard 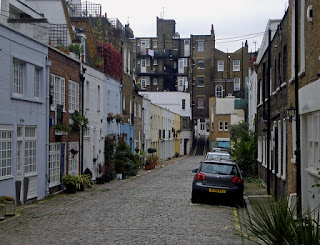 I’m trying to get more walking done. The scientific theory behind this is that it’s better than nothing. Also I like walking, it kind of suits me.

‘Love Island’ helps. I have nothing against it as a TV Show, I just feel any time I spend watching it is a waste of time. That’s just me, it’s not a political statement or anything. So, for that reason, when it’s on, I tend to get up and go out for a walk. It’s good for me and, besides, it's Summertime, I should be out enjoying it a bit.

So, yes, I go out walking, in the moonlight… (somebody kills the rising orchestra… spoilsports).

The other evening, I was walking and I got a little bored with my usual route so I took an unusual turn or two. Here was a street I hadn’t been on for quite a while. Here was a place that’s pretty busy in term-time but utterly deserted this evening. And here… wait a minute… here… was a place I never been before.

Look at it. Where did this place even come from? This is my town now. I’ve lived here for 22 years, it’s really small. How could a place exist that I had never seen before?

There’s not much to tell about this place where I’ve never been before. It’s a huge car park without a single car in it and there’s a huge sign that threatens terrible things on anyone who parks there illegally. It’s just a big old space with nobody and nothing in it. The only remarkable thing is that it’s in my town and I never even knew it was there.

Well, there is one slightly more remarkable thing.

This place; it’s less than a five-minute walk from my house.

It seems crazy, doesn’t it? But, thinking about it, I’d nearly bet that we all have little places (or big empty spaces) really close to us that we don’t even know exist. Why would we? We tend to go from A to B, occasionally via C or D, and that’s about it. When we go walking, we go to our local scenic places or follow our familiar routes. We rarely veer off into the unknown.

Wherever you live, I just bet there’s a place less than 500 metres away from you that you’ve never set foot on before. Maybe it’s just a field. Maybe it’s just a housing estate. Maybe, like me, it’s just a desolate car park where they threaten to lock you up if you use it, even though there’s nobody there.

And here’s the beauty of the plan. You don’t have to step outside of your door to start your expedition. You can plan it first. Hop on to Google Maps and zoom in on your area, examine the territory from map, satellite, and street view. Where haven’t you been? What haven’t you seen? Pick a spot, go and see it. Smell the air, take in the view. Fill in another tiny jigsaw piece of your environs.

On this, the 50th anniversary of the day we went to the moon. Take one small step for you.

Time of No Reply 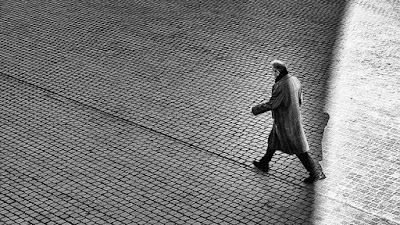 I’ve been living in this town for twenty-two years now. (Pause: That’s amazing… isn't that amazing? Okay, move on).

In a couple of ways, it’s a dream-come-true for me because, in my London days, I would sometimes think about the possibility of living in a place where I knew loads of people and where I was fairly deep-embedded… and here I am.

One peculiarity of small-town life is that lots of people say ‘Hello’ to you and, generally you say ‘Hello’ back to the lots of people who say it. In fairness, you also institute quite a lot of ‘Hellos’ yourself and, in turn, you tend to get them back. It’s a sort of a ‘Hello-fest’ sometimes and that’s okay with me.

This begs an obvious question, I know. Why do I keep saying ‘Hello’ to him?

Let me try to address that.

It’s a very good question and, in fact, I believe the entire crux of the matter lies somewhere in the answer.

The truth of the matter is, he drags my ‘Hello’ out of me. This happened most recently on Thursday afternoon last so I know what I’m talking about. It’s still fresh in my mind and it’s happened so many times over the years that I can’t begin to count them. He drags it out.

We approach each other on the street. I see him and I say to myself, “Nope, no way, nah-hah, I am not saying ‘hello’ to this dude this time. I’ve had it with all that shit.” But, as he approaches, he stares at me. Not in an angry way. It’s more of a mildly quizzical manner. He looks right into my eyes and this engaged expression forms on his face. I can tell, without any doubt, that this time will be different. This time, he has recognised me as the dude he’s being seeing around the place for all these years.

And nothing. The stare slides away beyond me and I get absolutely nothing back.

And then I’m annoyed for little while. Who does he think he is? Fuck him. If he doesn’t want to say hello why does he keep staring at me? What a prick.

But then I get to thinking, as I occasionally do. What does this exchange look like from his side? “Who *is* this guy,” he might be saying, “what does he want and why the hell won’t he leave me alone.” Maybe he’s just terminally shy and can’t bring himself to respond before I’ve swept past like some swarthy tsunami. Maybe it’s me who is the sinner here and maybe I should learn to recognise that, rather than just eternally pointing the finger elsewhere.

I’ll learn a lesson in tolerance from this, rather than just getting the hump over it. Still, I wish he wouldn’t continue to draw me out like that. Leave me alone and I won’t say hello to you, I promise.