(My son is sitting his Leaving Certificate exams at the moment.

In English Paper One, on Wednesday, there was an option to write a short story, suitable for publication in a collection of spy stories, in which a librarian, a photograph and a chair are central to the narrative.

I thought that was an intriguing challenge so, for this week's blog post, I have had a go at it. I wonder what mark they would give me? 'C-Plus', maybe?)

A Clear Hint of Autumn 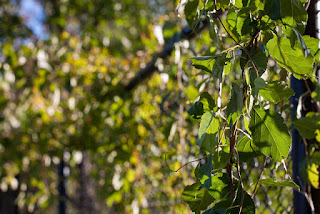 At the end of the Summer, after it became clear that Jessop was in parlance with the other side, a familiar chain of events quickly began to unfold.

First, they took him to a flat and stripped him and watched him while he showered himself. Jessop had been in the game long enough to know that this had nothing to do with hygiene. It was an exercise in power and debasement, pure and simple. A necessary first step towards everything bad that was to follow.

From there, it was an overnight drive to the Library, deep in the West Yorkshire countryside. Jessop had operated there himself a couple of times, was well aware of how the triple storey reading room with the spiral stairs and the pig iron balcony doubled up in its usefulness. He had seen his charges shuffle into that room and be wheeled out, feet first, some considerable time later.

He had seen too much, really.

And what he had seen, he had sold.

And therein lay the rub.

It was Rigby himself who greeted them at the front door. Impeccable as ever, tweed and loafers all without blemish. Jessop twitched in his adopted grey sweat pants and his Sorbonne university hoodie. The handshake seemed warm and largely without irony.

The drive back to London would take them most of the morning but at least they wouldn’t have the small guy shivering in the back, hampering their Premiership banter.

The Library was as he remembered it. Impressive, well kept. Rigby stood by the drinks cabinet and belonged there utterly. The Librarian in his place.

They wouldn’t waste the good stuff on him.

The whisky warmed him and sickened him all at the same time.

“It’s a shame, really," Rigby was good at understatement.

“You did it yourself for a while.”

“I never got caught.”

“Perhaps I’ll give you up.”

“You’ll give everyone up. They won’t believe the part about me though. Nobody ever does.”

The librarian had been a makeup artist once, in a previous existence. There were subtle hints of it still around his eyes and in the sharpness of his tie knot.

Jessop looked around the room. “So, what happens next?” he asked.

“You know what happens next.”

And he did. He was basically just making conversation.

Rigby had graduated from makeup to torture with an ease which surprised no one. There were marked similarities in the jobs. He still had a toolkit, he still approached his work with care, and his clients invariably looked different when he was done with them.

The torture room was a screened-off corner of the library itself. Jessop followed Rigby into that corner without argument. He reckoned that a bunch of gorillas could be summoned with one bleat. So he tagged behind, meekly enough, stopped and looked around. He had never been in this actual corner before but he had seen videos and heard tape recordings. The place was not a surprise to him.

People who haven’t seen an operating theatre tend to imagine it in a particular way. They are often surprised to find that operating theatres are just rooms, much like any other. The torture chamber, for that is what it was, held nothing out of the ordinary in the way of décor. Sliding sash windows, a picture rail. Like the operating theatre, though, it was the equipment that set it apart from other rooms.

Right there in the middle of the space, there was a chair.

“When are the team coming down?”

“I requested a solo run at you.”

Jessop turned and stared at Rigby. The façade they were both maintaining could not hold much longer. He was about to be tortured to death by this man. There was a limit to even the stiffest of upper lips.

“Why would you do that?”

“You’re a traitor. A lying fucking piece of shit who has caused some of my best friends to be killed. But I’ve known you all my life. You need to be interrogated but not humiliated. I can see to that.”

“You won’t be thanking me for long, I fear.”

Jessop had seen the videos, heard the tape recordings.

Rigby walked to the window and studied the sky.

“What if there was another way?” he said.

“We sit down in the kitchen together. You tell me everything. I write it down.”

“And then I shoot you in the head. Fast and clean.”

“How would you know I’d told you everything?”

“I already know everything. I just need to hear you say it out loud and, frankly, beyond that, I couldn’t give a fuck.”

The kitchen already smells of coffee. Rigby has a slender laptop and he types away with impressive speed while Jessop tells his tale. There are some tears, as there so often are, and even a laugh or two. The process takes two days. Rigby extracts 2 pints of blood from Jessop’s arm. His urine and excrement are saved in Tupperware containers. On day two, Rigby reminds Jessop to give him up and he does.

On the last night, sitting together on the floor of the torture room, they decorate the chair with Jessop’s bodily fluids. Rigby is a make up artist and a torturer, he knows where the spatters form and how to replicate them.

They photograph the chair from several angles with an ancient Polaroid camera. The snaps will go into the file along with his confession. It will never be read.

And in the morning, when they walk outside together into the garden, there is already a clear hint of Autumn in the air.
Posted by Ken Armstrong at 09:57:00

Ahhhhhhh! Did not see that coming. A+ ... and you know how stingy we Scotsmen can be. (It's all lies.)