Out In The Air 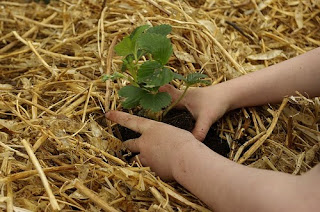 I was out in the garden yesterday…

(The readers all sit forward intently sensing this is going to be a high-tension and controversial post… not!)

If left to my own devices, I would probably sit inside for most of the time.  Those things I like best; books, computers, telly, bed… they’re all indoors (yes, I’ve been allowed bring the bed back in, didn’t I update you on that?  Sorry.)

But yesterday, I ventured out.

I should explain a bit.  I go out loads, I work all week and that keeps me out quite a lot.  But my Lovely Wife tends to work evenings and all of the weekend, at the moment, so that keeps me around the house quite a bit with the kids.  I have few complaints about this.  Like I said, I like it here.

But the point of this little post is simply this.  It was Good to go outside.  Really Good.

God knows, I didn’t do anything glamorous, out there in the back garden.  In fact, I was cleaning drains and such.  About half way through, it started to pour with rain and I didn’t mind that either.  I'm a bit like Br’er Rabbit, I was born and bred in a shower patch.  If I was inside, looking out, the rain would have seemed an insurmountable barrier to doing anything out there.  Outside, though, looking in, it was no bother at all.

When I eventually came back in, I was tired and in bad need of tea and much (much) more contended than before I went out.

The lesson learned is therefore ‘Go Out into Your Garden More, Fool’.

And you don’t have to go half-way round the world to get it.  You don’t have to jet off to sunnier climes or hit the big city or the mountain or the beach.  You just have to do something Different.

And my lesson, I reckon, is that it doesn’t matter how small that different thing you do is, so long as it is Different.  Even moving from one room to another can perhaps be beneficial...

At this point, perhaps, you may well say, “What the hell is he on about?”

It’s just another Pep Talk, really.  For me.

I won’t get to travel very far this year, pretty much like last year and the year before that… and next year.  So, in the words of our parents, I'll have to ‘Make My Own Fun’.  I'll have to remind myself that fun and relaxation and peace do not necessarily lie a thousand miles away via charter jet.  All those things can lie right outside in my back garden…

Labels: change of scenery, outside

Patricia O’Higgins and Brendan Brogan – A Thank You 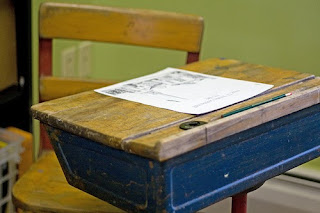 This is something that I’ve been meaning to do for the longest time so please bear with me on it.

Teachers sometimes get a bad press.  They get great holidays and they finish quite early in the afternoon and it’s often steady reliable work and they drink tea in the staff room…

But teachers get to do remarkable things, when they do it right.  They leave little ‘Time Bombs’ in our heads.  They can plant things in there, thoughts, ideas, aspirations, that can sit dormant for years – decades even – and then, boom, suddenly those little bombs are a part of what we are.

Two teachers, in particular, have left a lasting impression on me and, even at the age of 47 now, I still think of them often and what they did for me.

Brendan Brogan taught me for all of my years in Primary School (thank God) and Patricia O’Higgins taught me French and then English in Secondary School.

Let me tell you a bit about them.  These are my memories, they may not be entirely correct.

My older brothers had both been in Brendan Brogan’s class before me and, when it came time for me to go to the school, they told me that I’d be lucky if I got him.  That September morning we lined up in the playground, one by one, and two teachers stood, each to one side, at the head of the line. One was Mr Brogan, the other was a Christian Brother who’s name I don’t remember.  The children stepped forward and, in a rudimentary selection process, were moved one to Mr Brogan’s side and one to the other.

In a quick calculation, I saw that I was destined for the Brother’s class so I quickly turned to the kid behind me and said ‘Swap?’.  He did.  This was probably one of the best moves of my life.

Brendan Brogan was no ‘walk in the park’.  He was a serious, committed teacher who brooked little foolishness from his pupils.  But he was always fair and enthusiastic and accessible.  The school has since been recognised as a place where malice and genuine pain lurked in certain of the classrooms.  Brendan Brogan’s classroom was an Oasis of safety and learning in the midst of the place.  I don’t say this without firm knowledge of the facts for, on the rare days when our teacher was off sick or on a break, we were exposed to the physical brutality and pervading fear which walked the corridors outside our room.

But this post is not the time to dwell on that.  This post is to celebrate Mr Brogan and how very well he taught us.

He always encouraged drama in the class and, often, a group would stay in at the breaks and prepare a little play to show to the rest of us.  Whenever I meet a follow pupil of my class, we always seem to recall the same play.  In it, a character encountered something scary and, in an astonishing special effect, this person’s hat shot right up off of his head.  Afterwards, we were shown how it was done, which perhaps spoiled it a bit, but it was still a bit of pure magic there in our Oasis classroom and many of us remember it still.  I think that this willingness to ‘do’ drama influenced me and made me fearless of making my own.  This was one of those brilliant ‘Time Bombs’ which, years later, went off for me.

The thing I loved most about Brendan Brogan’s class, though, was how he brought his own life into the room.  He gave us his love of Irish Songs and he instilled a modicum of National Pride in the most subtle of ways.  While we were with him, five years, I think it was, he found the love of his life, Eileen, he married her, they went to Rome on their Honeymoon and we chipped in and bought him a weighing-scales as a present.  She was a Nurse and we learned that the Irish for Nurse was ‘Banaltra’ and, forever afterwards, when ever she came into the classroom, Eileen was ‘Banaltra’ to me.  Once, she left the sewing things on the chair at home and Brendan came in and sat on them, damaging his arse…

These are things that pupils don’t always get to know about their teachers.  But Brendan generously showed us his life and it was a fine example of how to live ours.

I’ve always wanted to say it to you - and, indeed, I am resolved to post you this when I’m done - that you were a Brilliant Brilliant Teacher and thank you so much for that.

In secondary school, Patricia O’Higgins started out teaching me French but, from minute one, she started influencing me in English and Writing and she never stopped quietly doing just that.

Day one, we did a poem (in English) called ‘Blackberry Picking’ by Seamus Heaney.  We looked at each other, “English… in French” we muttered.  I can see that poem still.  She asked us what we were reading, ‘Enid Blyton’, they answered, ‘Whizzer and Chips’ and there was me, in the middle, having just finished ‘Papillon’ by Henri Charriere, was halfway through ‘Banco’ and secretly had ‘The Dice Man’ under my belt.

Later, that first class, when she was giving out books for the class to read – books of that Enid Blyton ilk, she gave me ‘The Dark’ by John McGahern, quietly saying, ‘I think you might like this…’

This quiet relationship of encouragement came to the fore when I moved from John Benson’s class (with an excellent grounding from him) to Mrs O’Higgins class for the ‘Leaving Cert’ years.

I can’t put my finger on this as well as I could for Brendan Brogan – I think that’s because I was a teen now and the time bombs had to be planted more subtly, lest I reject them out of adolescent defiance – but Patricia made me feel as if I could be a writer.  Somehow she seemed to look at me as a writer.

She told me once I had a ‘nice, chatty, style’ and that simple phrase has consciously coloured every word I have written ever since.  That’s may sound crazy but it is quite true – such is the influence of the Brilliant Teacher.

On the day I left the Technical College in Ballinode, Sligo, I knew I was bound for Dublin and Third Level Education.  On that day, she said to me, “I think Dublin will be good for you and for your writing.”

My writing?  I had ‘writing’?  In that final touch, she had validated my sub conscious dreams to be a writer and thus she sent me out into the world.

And, as must often be the case with Time Bombs, I went out into the world and wrote not a word for many long years after.  But the Bomb was there and when it finally went off, it went off hard such that I now must write every day or I am not at peace.

So thanks, Patricia.  I feel bad calling you Patricia but I think you might let me off.  I found a picture of you on the Internet (at Trinity, with Family) and you look great.  You did a great thing for me, and  for many others too, I have no doubt.

I just wanted to say thanks for it.