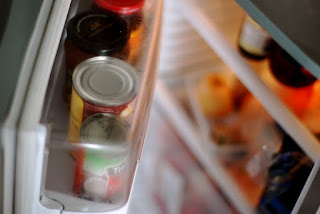 The Cayvee makes its home in the gap between the back of the fridge and the wall. The fridge has not been moved in years and there is a collection of cobwebs there that looks like a quilt or a silky sheer blanket. All of the spiders who created these webs have long since moved away.

Imagine a translucent grey bat with a single long needle tooth and you may gain some idea of what the Cayvee looks like. You could watch it and watch it, if you could find it, but you would never see it move. It maintains its position, holds its stillness, week after week, month after month, sometimes even year after year. Like the Kangaroo Rat or the Desert Turtle, who can both wait quietly for years for their next drink of water, the Cayvee can exist, dormant, behind the fridge, among the webs, waiting for that rare moment when conditions finally come right and it can at last feed once more.

It had been four years since Linda had last left the fridge door open overnight. It had happened in the dead of winter, so nothing had spoiled. The only tangible consequence was that Kendrick had got up in the morning, padded into the kitchen, and tutted loudly when he found the fridge door ajar and the inside light casting its slender glow out onto the ceramic floor. His 'tut' wasn’t loud enough for Linda to hear. She has fallen asleep again, despite the fuzzy pop song which persisted on the clock radio. The fridge door was closed up and nothing more was ever said about it.

Four years later, it was Kendrick who forgot to close the door fully. He was getting a beer from the container at the bottom, the fourth of the evening, so he never noticed that the door had not swung shut. Linda found it that way in the morning and complained loudly to Kendrick, who had forgotten about Linda’s own earlier failing in the same regard. If he had remembered, he would surely have defended himself more thoroughly. It was summer and thundery, and the milk had turned slightly. It wasn’t the end of the world though. Hardly that.

On both occasions, the Cayvee had awakened at the unceasing throb of the fridge light. It had emerged from its cobweb cocoon and squeezed through the tiny gap at the side of the fridge. It had slipped inside, blind and deaf but alive to the sustenance inside. It had climbed and clawed, pierced with its single fang.

And then it has feasted.

By morning, it was back among the cobwebs and the milk had turned again. The Cayvee didn’t know. It cared nothing for dairy products.

That Friday evening, Kendrick returned with the food, all fresh and chip-shop-pungent, with as much speed as he could manage. Although the vinegar was already seeping through the double-bagged fare, the chips were still vibrant and ‘roof-of-the-mouth’ hot-hot.

Linda had laid two plates out on the table, but Kendrick eschewed such niceties. The bag was the thing, that intrinsic part of the affair. From hot oil to mouth with minimal interference, that was the key. Only one further intervention was required. The final touch to make everything perfect.

Kendrick cracked open the fridge and foraged in the back, behind the half jar of spaghetti sauce and the ancient bottle of apple cider vinegar. He pulled out the plastic bottle, raised it high and stared.

“What?” His wife paused in her chip bite.

“Maybe you can squeeze a bit out.”

Kendrick held the bottle up to the light.

“The kids are sleeping over; the food is here. Let’s just enjoy.”

“It’s like somebody actually drinks it or something. It’s like there’s a 'Ketchup Vampire' lurking around here somewhere, lapping it all up.”

Deep in the tiny space behind the back of the fridge, the Cayvee stirs minutely as if something has momentarily evoked it. Perhaps a dark eye opens and peers out but, if so, it is only for the shortest moment. Its belly is full, and the world is secure for the foreseeable future. It is time to rest and rest and wait.

A time to feast will come again, some day.

Today’s blog reminded so much of this fictional creature I’d thought I’d simply share this.

What is the Washer Lizard?

Size: 2 to 4 inches in total length, but nearly one-quarter of this is tail. They are small lizards, weighing roughly three-quarters of an ounce as adults.

Colour and Shape: The individual lizard’s colour varies according to the machine it inhabits, but most are grey. At birth, the washer lizard is the colour of human flesh. It darkens with age. The animal is scaly and somewhat rough to the touch. Its scales have no pattern.

Other Features: The pads of the lizard’s feet are covered in fine hairs, allowing it to cling to the vertical surfaces of the washing machine. When the lizard makes its nest and lays eggs, it emits a viscous liquid from its rear. This is perhaps why the washer lizard’s tail is far shorter than those of other lizards. Its tongue is unusually long, and lint fibres often stick to it. Lint is central to the lizard’s life. It doubles as a food source and material for its nest.

Diet of the Washer Lizard: Washer lizards prey on insects that live in the cleaning facilities. They also consume undissolved detergent and dust that is high in protein. As mentioned above, the lizard will eat lint, in addition to the bits of bread or candy left behind by the laundromat staff. They drink water that leaks from the machines, and once fully grown they will also climb on top of the machines, stick their necks into the detergent drawer and lap up the hot water. Young lizards occasionally attempt this, too, but they will likely fall into the machine and drown. This is one of the reasons that it is extremely difficult for the washer lizard to reach adulthood. I will return to this topic shortly.

Habitat of the Washer Lizard: The washer lizard can be found in both of the cleaning facilities on the factory campus. Each lizard lives alone, in a nest it makes below or behind a washing machine. The lizard may also choose to make its home in the gap between two machines. The nest generally consists of lint fibres held together by the liquid the lizard produces. Nests measure roughly four inches in diameter. Because lint is a limited resource in this environment, nests may be smaller when newly created. Most lizards prefer to find an abandoned nest and expand it over time. As a cold-blooded reptile, the washer lizard seeks out sunlight from the windows or the heat of washing machines currently in operation. It may also remain in its nest, making minimal movements throughout the day. Straying too far from one’s nest may result in it being stolen by another lizard. Because of this, the lizard only rarely leaves its immediate surroundings. Throughout the year, when the facilities are closed at night and the machines are still, the washer lizard returns to its nest to sleep. In the winter, sunlight is scarce and the temperature drops significantly. This is without question the most dangerous season for the washer lizard.

Life of the Washer Lizard: The life of the washer lizard is inextricably tied to the washing machine. It never make its nest far from the machines.

The washer lizard has a maximum lifespan of three years. A lizard that survives this long has been extremely fortunate. Should it make it to old age, its 3-inch body may shrink. It will breathe its last without ever straying far from its birthplace, probably dying behind the machine where it nested or maybe inside the lint trap.

– From The Factory by Hiroko Oyamada