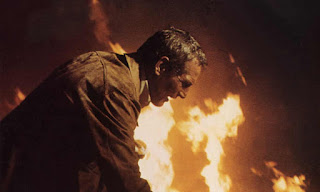 Sometimes, with a blog like this, you can chase a thought too far until it isn’t a real thing anymore. This could well be one of those times. You can decide… or not. You can just read it… or not. It’s all down to you.

From time to time, the film ‘The Towering Inferno’ comes on TCM in a really nice full widescreen print and, when it does, I find it hard to leave it alone. This month is one of those times, it’s been on twice over the last week or so and I’ve watched different parts of it each time. Last night, it was into its final half between eleven and half past midnight and I reclined on the couch and went along with it for the ride, as I have so often done.

It’s a movie of its time and it looks pretty-darned silly in places now. There’s OJ, breaking down an apartment door that swings open just before he hits it. There’s Steve McQueen, being lowered onto a dangling scenic lift by an unseen helicopter whose blades would have been shattering off the side of the building if it had really been up there (‘always bugged me, that).

But it also has its moments. One sequence, in particular, succeeds in showing how cruel and unforgiving fire can be. When glamorous couple Robert Wagner and Susan Flannery get trapped by the fire in an isolated apartment, the point is well-made that, no matter how brave and resourceful you are, if the fire is between you and safety, the fire will get you.

It was a big movie in my life in ’74. Even at the age of 11, I was something of a buff. I used to buy a movie magazine and read up avidly on what was coming soon to my local cinema. ‘Towering Inferno’ came in with a lot of anticipation. Massive stars, massive budget, an unheard-of co-production from two major studios. I even read one of the books the film was based on, before it arrived. Yes, I was 11 and something of a strange child.

And that leads me to the point of all this movie trivia. I wanted to sandwich the key part of this piece between two sections of boring stuff. If I’m lucky, perhaps nobody will see it in here. Why would that be, Ken? Simply this; it involves me mentioning what I do for a living. Read the blog, all seven hundred thousand words of it, I don’t think I mention my career anywhere in all of those posts. It’s one of several places I choose not to go with these scraps of writing. A part of my life I enjoy enormously but also one which I don’t particularly want to write about.

So here it is.

It’s not something I ever realised back in the day. It’s only these days that I think I see it, when I watch that old movie late at night on a vintage TV channel. Paul Newman’s character, the architect, was probably a key part of making me want to spend my life working in the architectural profession.

Even now, when I watch the film, I am drawn to how well he knows his way around the workings of his building. He opens services ducts and electrical cabinets, he rolls out drawings and points directly to the key places and, when it comes to blowing up the tanks in the roof, he tells Steve McQueen that he may not know how to place the explosives but he sure-as-hell knows where they have to go.

I may have been only eleven but the vision of a person with this kind of knowledge and control over his subject (as well as being cool and handsome and married to Faye Dunaway) was probably a key element in my deciding what I would do with my life.

These days, I actually see the Paul Newman character in a different light. He is something of an impotent fool who allowed his masterpiece to fall through his fingers and be turned into a death trap by unscrupulous money makers. He may run bravely through the burning building, saving lives and being technically proficient, but he fucked up on a much grander level than that and he knows it.

Movies are a funny business, aren’t they?

And, of course, it’s never as simple as all that. By the time I saw The Towering Inferno, fire had already licked its way through my own family. A few years before, my Granny, with whom I was very close, had entered her neighbour’s house while fire burned savagely within. Valued lives, young and old, were lost on that terrible day and Granny spent the subsequent year of her life in various hospitals, undergoing operation after operation. Her injuries were horrific, but she survived and went on to live the remainder of her life with her customary vigour.

Perhaps I was too young but, watching the film back then, I didn’t seem to equate what was happening on the screen with what had happened in my life. Were my parents anxious about me going to see this film, given what I had seen? If they were, I never knew it. When I think of it now, the images on the screen seemed completely divorced from what had happened to Granny in the little house on the hill. I was watching an entertainment, nothing more, nothing less.

But things run deep and we don’t always know that they are running at all. In my work, I have a keen interest in seeing that matters of fire protection are observed and adhered to. I try to keep an eye out for things like that. It’s not totally surprising, when you think about it.

And therein lies my question. When I went into the Savoy Cinema that Friday evening in 1974, was I just seeing the next in a long line of flicks? Or did something more substantial happen that night? Is that the reason why I will still sit and watch ‘The Towering Inferno’ whenever to comes on TCM in that lovely widescreen print?

One final word on this. Just in case you might not think that a silly old flick could ever inspire anything of note, my small of amount of research reading threw up this IMDB note.

“After seeing this film, novelist Roderick Thorp had a dream that same night about a man being chased through a skyscraper by gun-wielding assailants. This was the inspiration for his 1979 book "Nothing Lasts Forever" which eventually was made into the film "Die Hard."

One of my favourite subjects at school was Engineering Drawing or Techie Drawing as everyone called it. Arithmetic, Maths, English and Music were my other favourites—I make no bones about it: I loved school; I loved learning; I still do—but Techie Drawing was my favourite favourite subject. I took to it like a duck to water. I can’t draw freehand to save myself but I love art and Techie Drawing was art in straight lines and that I could do. I have two oil paintings in my living room that I did when I was in my early teens and what they are are techie drawings coloured in. My O-Level result was an A (98% I learned) and I had no doubt I was going to have a long and happy career as a draughtsman since I was realistic enough to realise that making money as a composer or poet was probably beyond me.

The day after I left school I started in an architect’s office in Ayr. The pay was a measly £30 a month which after you deducted my train fair (about £5 a week back then) didn’t leave much but my boss’s plan was not so much to save money as to find someone who wanted the job more than he wanted money. Which I did. On top of that, of course, he was happy to pay for me to go to college and I did but I hated it. I didn’t really care about bricks. I just wanted to draw. And draw I did, painfully slowly and very badly. Because here’s the thing: no one told me at school I’d be working with pen and ink and very fine lines and the simple fact is I couldn’t see well enough to do the job as accurately as necessary and as fast as necessary. After three months I resigned because I knew it was only a matter of time before I got the sack. I was devastated because there was no Plan B.

Now, of course, it’s all computers and that pisses me off because I’m good with computers and AutoCAD would’ve been my saviour back then but that’s life and life sucks.

I have seen The Towering Inferno and more than once although it doesn’t hold any special place in my memory; never a huge fan of disaster movies. What I find interesting though, looking down the list of films released in 1974, is I don’t recall going to the pictures to see any of them, not even Blazing Saddles or Young Frankenstein. Odd that.

I’m afraid I don’t have any memories of fires other than to say the cinema I would’ve watched The Towering Inferno in had I chosen to watch it was the town’s second venue, the renamed (no one talked about rebranding back then) Rex. The George (originally The Kyle) burned down in 1969 during a showing of Charge of the Light Brigade. You can imagine the newspaper headline.