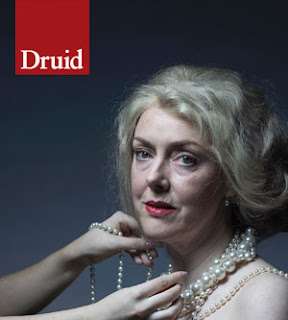 Patricia and I made a pilgrimage to Galway on Thursday evening to see Druid’s brand-new production of ‘The Cherry Orchard’ in a translation by the late great Tom Murphy. It was a double opportunity for me. Firstly, to finally get to see a production of this play, because I had never seen one, and secondly to once more visit Druid in their home place, which is always an experience.

Another experience is this one; whenever I see Druid in action, I like to try to write down some of my thoughts on what I have seen. After my years in London, and although I see lots of great theatre, Druid provides a rare opportunity for me to get a very early view of a production that will have the best of everything possibly instilled into it and which will often go on to great things.

So, here we are. The Druid ‘Cherry Orchard’…

Probably the first thing to say is that it is a slow burn, in at least two different ways. Firstly, well, it’s a slow burn. There’s a lot of characters to meet and to come to grips with. When the interval came around, I stared into my fizzy water bottle and worried that the material wasn’t engaging me as I had hoped it would. The second half hit home harder. We knew who everyone was by then (well… almost) and the stakes had been defined. It was a slow burn in that respect.

And it was a slow burn in that other respect too. Leaving the theatre, I was thinking it just hadn’t moved me as much as I needed. Yet here I am, three days later, still mulling it all over, still engaged, still questioning. That may well be the nature of this beast – that it delivers ts punches gradually.

With so many characters to deal with, it is a challenge to define them all clearly. The production did this well, though one or two seemed to veer a little too much towards caricature in order to set themselves apart. Some characters are forgivably broad. That is there in the writing, but Varya, in particular, seemed too easily defined by her worry and her gloom. Everything about her nailed this aspect of her character, from her dour, key-ridden, costume to the inevitable cloud beneath which she resided. Despite this, her climactic scene with Lopahin was a definite high point of the play. The silences between them tortuously played and very telling.

I was not familiar with the text before seeing this production. Afterward, I read an old copy of the play that I had in a collection on my shelf, that translation credited to Constance Garnett. What jumps out, for me, between that text and the Druid production is that there are no out-and-out ‘bad guys’ in the Druid version. One could see how Lopahin, the poor-boy made-good, could have been easily painted as the culprit in the piece. But Druid works hard to make it not so. When we come into the theatre he is there already, asleep in his chair. He is played with sympathy and thoughtfulness and, even when he does what he inevitably does, the words of pleasure and satisfaction that he is given to say seem to ring hollow and unconvincing.

This seems indicative of the overall approach to the play that Murphy, but particularly Gary Hynes, has taken here. The Druid version does not seem to wish to be about a bad person or two. It does not seek to lay blame. It is not (as it may initially seem) primarily about corporate greed or property or money. Rather, it seems to be deeply concerned with the needs that people have and the inability, that other people have, to satisfy those needs.

This will be the first time that a Druid production will be live cast to Cinemas around the country. That is happening on Thursday 5th March. Looking at the play, I couldn’t help but feel that the production design has been largely influenced by this momentous development. The set is astonishingly wide and is inset with a similar widescreen ‘frame within a frame’. The whole thing seems deliberately cinematic. Oddly, it evoked for me one of those almost inevitable early morning RTE Christmastime viewings of David Lean’s ‘Doctor Zhivago’, particularly the later scenes (which always seem to be on, when I finally get up). In one sequence, Yuri and Lara return to the abandoned estate, the house now a striking ice-mansion. The set here, though not icy, reminded me of that ice mansion and the wide-wide aspect ratio of the staging made it feel as if a cinematic event was unfolding.

One side effect of this impressive staging may be a loss of intimacy in certain moments. The cast spread out to fill the stage but, in doing do, they seem to lose touch with each other. As I write this, I wonder if this is also deliberate, further driving home the impression of those spaces between what we need and who on earth might give it to us. Deliberate or not, and visually striking as it is, it left me longing sometimes for the ‘in your face’ intimacy of Druid’s Godot from a few years ago, where I felt as if I was lying in the dirt with Vlad and Gogo instead of watching a movie, as I rather did here.

I came out of the theatre on Thursday evening with more concerns than I seem to have now. On the evening I was very pleased to have added The Cherry Orchard to the collection of artistic things that I have seen. In seeing it, I was entertained and treated to a generous spectacle. In truth, it just didn’t set me alight. Since then, though, I have found quite a lot of food for thought and consideration in what I saw. This leads me to think that instant gratification might not always necessarily be the goal. It’s that slow burn again. It’s still glowing a little as I write.

Love it or not, Druid inevitably affords us a golden opportunity to see world class theatre being created and performed here in our home in the West of Ireland. It is far too good an opportunity to pass up. And, even if you come away a little mixed-up or unfulfilled by the experience, the echoes of what you have been shown might well resonate in your mind in the hours and day to come.

And that, in itself, can only be a very good thing.

Chekhov is one of those writers I kept meaning to get round to and never quite managed it. Dostoyevsky was another. A few years back, on one of Carrie’s trips to the States, I sat down and over the course of four nights watched Three Sisters, The Cherry Orchard, Uncle Vanya and The Seagull. I wanted to be more impressed but, I’m sorry to report, I wasn’t. It bothered me that. I don’t like not appreciating things especially stuff “cultured” people seem to relish. Opera is the best example of this. As I’ve probably mentioned before I love all kinds of classical music from Gregorian Chant right down to Serialism but, the odd aria aside (who can hate ‘Nessun dorma’ or the “Toreador Song” (‘Votre toast, je peux vous le rendre’ to give it its proper name) from Carmen?) but apart from that it’s all bloody awful IMHO and I have tried—I have genuinely tried—but something in my brain simply will not process it. And I kinda felt that way with the Chekhov. I mean I kinda feel that way with Shakespeare too if I’m being honest and I’ve seen more of his plays performed live than anyone else. But they’re familiar. Chekhov’s not. Maybe he should be. It’s like Bergman. I’ve always been a fan of his work long before I saw Woody Allen’s Interiors (my favourite is probably The Silence) but it wasn’t until I watched a documentary on Cries and Whispers I realised how much I was missing. I often struggle with subtext but here I felt I’d only caught the melody and completed missed the harmony. Maybe Chekhov’s like that.

You mentioned the intimacy of Druid’s take on Waiting for Godot. I’ve probably watched more versions of this play (or excerpts from) than any other but I’ve only seen it live once, in an old church in the centre of Glasgow, and what I loved about this performance was we had the front row. The actors were only a few feet from us and it was wonderful. One particular addition I enjoyed was the fact the two men were already on stage as we filed in and took our seats. They stood (and sat) motionless until we were settled and then suddenly sprang to life. Lovely touch.