Speaking French to the Cats 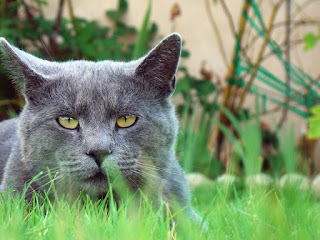 The first thing to say is this; the cats won't care.

You must always keep that in mind.

We have a reasonable little back garden/yard here at the house but over recent years, if you’ll forgive a highly technical gardening term, it’s been let go to fuck. Every year, there’s a little less grass to mow, as the wild things intrude further and further into the clear space.

The big trampoline, once the site of offspring lie-outs and junior social scheming circles, now lies fallow, unbounced-upon and quietly rusting, refusing stoically to be whisked away by a convenient high wind.

For a long while, I consoled myself that all this landscaping neglect was good for the environment and great for the bees and I’m sure it probably is. It doesn’t get away from the fact that the garden is closing in on the house and, if there’s any triffids lurking out there in that undergrowth, we could all be in for a time of it.

Into this untamed world, the cats come.

I think I’ve mentioned it here before but there seems to be an inordinate number of cats on our street. In fact, it is hard to throw your eye in any particular direction without it landing on a random moggy of some description. I think most of them have homes that they retire to in times of reflection but, generally, they hang around the street stalking each other and eyeing-up the passers-by. I have a theory that they are fed by some kindly neighbour who mistakenly thinks they are all feral (with their little collars and their tinkly bells) and who feeds them copiously in an unnecessary attempt to keep them alive.

And, yes, my garden may be a bit overgrown but, my, how it catches the sun. Beneath the gently swaying leaves of some immature triffid lie little pockets of sundrenched bliss and it is to here that the cats come.

They don’t come all together, that would be too freaky even for me, but it’s not uncommon to see two of them basking together down the backyard wilderness.

And, yes, I speak French to them.

My French isn’t any good. In fact, it is ‘tres terrible’. I have only the smattering of catchphrases that many a lapsed schoolboy clings onto. As a result, my conversation with the loitering pussies is generally limited and invariable one-sided.

These chats generally happen when I am taking the washing to the swirly clothesline to hang it out. Have I mentioned that I’m something of a domestic god? Ah, well, I’ll do a special post on it soon and them you’ll shake your head gently in amazement. Sometimes, though, I will even make a special excursion into the garden at lunchtime, to enquire after the cats’ wellbeing.

The cats watch me through heavy-lidded sun-soaked eyes, and one feels that they know what I am saying. At the very least, they know from experience that I am not there to spoil their day. So, although I can’t say that they engage with my exotic parlance on any meaningful level of interest and reciprocity, I can be sure of one thing: they tolerate me.

Why do I speak French to the cats? I really can’t say. It’s just something I do. Perhaps it’s because I tend to see cats as slightly exotic creatures and I feel that they deserve a little extra from my lame conversational ploys. Perhaps (being harsh on myself) it represents some subconscious wish on my part to be overheard by a curious neighbour and judged to be a) offbeat and interesting or b) mentally challenged. I don’t really think that’s the reason though. There are few opportunities for neighbours to overhear my back-garden emissions and that is a good thing. The things I say when the coal bunker won’t co-operate are definitely not for general consumption.

In the coming period, when there might not be many other things to do, I may go to work on the garden. I may try to ease the ancient forest back so that I have some room to sit down out there. If I do, it won’t be an industrial effort. I picture it more like Mr. Miagi snipping minutely at his favourite bonsai tree, expecting that a minimal effort, expended over many days, will reap some wonderful reward.

Whatever I do, I will remain mindful of the cats. I will reserve a warm corner where they can continue to come and visit and bask in the warmth of my yard.

Whatever I do and whatever way I do it one thing will remain true, now and forever more.

The cats won’t care.
FOOTNOTE - This post has grown into a short series about my relationship with one of these cats. If you like, you can read the next post here.

When I learned I had to take French when I moved up to the Academy I got quite excited. I even persuaded my dad to buy me a French textbook so I’d be one step ahead but I didn’t get much joy out of it nor did I enjoy the actual French lessons when they came. Unusually for me, who up until then had been good at pretty much everything academic, I didn’t excel in Languages although I found Latin (which we took for one year) more to my taste than French. I’m glad I had a taste of both because they enhanced my appreciation of English but when the time came to choose the subjects I’d take to O-Level a loophole allowed me to avoid all languages and sciences and although I don’t regret my decision if I could take a magic pill and suddenly be able to understand a foreign language I’d be up for it. When I was nineteen I did have a crack at teaching myself Chinese but I was on a hiding to nothing there. Not sure what possessed me.

I don’t speak French to the bird but when he responds he does so in a butchered version of English that I started using on his behalf and now it’s his voice. It’s not as unintelligible as Unwinese and relies heavily on multiple suffixes: singing becomes singering, noisiness and nastiness become noisification and nastification, my daughter is the blonde bird although technically she’s not blonde (everything living is some kind of bird), French (adjective) would probably be Frenchalicious and French (noun) Frenchiness or, more likely, Frenchaliciousness. The TV is tevalision. He used to talk in a Lancashire accent too but that faded after a while.

I never did this with any of my mother’s cats. I talked to them and responded to their mournful cries, “I know. It’s awful, yes. Tell me about it” but that was about it. I did know a French woman (Mrs Butchart if memory serves) who had two ancient cats, Cher and Chéri but that’s the only way I can connect French with cats.

I'd give a lot to hear one of those chats with the bird. It sounds golden. :)

He's doing his nut this morning so I told him to stop racketeering. Not that he pays me a blind bit of attention.