Dawn of the Cats 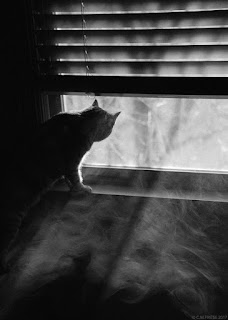 This morning, I looked out my kitchen window just in time to see a black cat’s ass vanishing through a broken windowpane in my garage door. Thirty seconds later, a ginger cat turned up and searched all around, clearly wondering where the black cat had vanished to. It searched and searched but never figured it out.

I went to the garage door and opened it and explained to the cat, who was still concealed somewhere within, that it seemed like a very nice cat but, unfortunately, I wasn’t amenable to letting it set up any kind of residence in there. There was the worry – well, let’s not put too fine a point on it - of it doing some weeing in there and thus significantly reducing the already questionable amenity of the place. Plus, being unaware of the physical likelihood of this occurring, there was at least the possibility of a litter of kittens arriving at some point in the shed and all the inherent responsibility and worry which would come with that.

I taped up the window, all the time being sensible of the eyes of the cat being on me from the gloom and amassed tat in the garage interior. When I was done, I once more entreated the cat to come out in its own time. Then I retreated to the house where I set up a stakeout on the garage door from across the kitchen sink.

After a time, quite a long time, the little black cat came out. It peered out cautiously and seemed to sniff the air, possibly to see if there were any ginger colleagues or crazed humans still lurking about. Then it eased out and slinked on its way. I nipped out and closed the door.

I don’t think the cat was living in the shed. It was sleek and well-minded. I think the shed had very recently become a hobby for it, a stop on its daily patrol. There are probably some mice in there to stalk or a nice corner to dream in when the rain was coming down.

This episode has focused my mind once again. It had all slipped into my peripheral vision, my sub consciousness.

There are a lot of cats round my street.

Who owns all these felines? Who keeps them well-fed and watered, as they so evidently are? Are cats really popular in my neighbourhood or is there one main household responsible for the herd? A cat sanctuary where the little mites roam free, unhindered by any resource or contraceptive concerns.

It’s kind of spooky. It’s like the first reel of The Birds except it’s about Cats. They seem to be congregating, conspiring, laying their plans against us.

Don’t get me wrong, I like cats. They’re got shedloads of character (see what I did there?) and they don’t give a shit about anything much. That’s all commendable stuff in my booklet. I am, however, a little bit allergic to them. Nothing earth shattering: if one were to rub up again my bare arm, it would come up on an itchy rash and then shortly-after, go back down again (my arm, not the cat). I wouldn’t fall to the ground convulsing or anything. The rash, ma'am, just the rash. All this means that I usually stroke them with my index finger. That particular digit seems to be largely immune to irritation. It’s all fairly harmless stuff but it does tend to keep them at a small remove from me. And that, in turn, makes me that little bit more paranoid about them.

As I type this, there’s a cat sitting out in the front garden looking in. Does it know what I’m doing? Will it now alert its compadres and will they then commence a swift and stern action against me? Is this how it finally begins, the Feline Apocalypse?

Cat story: I once had a cat, several actually but the story's about this one in particular, called Kiwi. It's funny because everyone always asked if he was named for his green eyes and I relished each opportunity to say, 'no my dad called him that because he's an all black". Dad's a fan of the rugby.

Kiwi had a quite a few escapades in his life, once disappearing for weeks and returning just as mysteriously, thinner but otherwise noplussed. This story's just an anecdote really.

My bedroom faced out over the back garden, which faced out over the 'rec' - short for recreation ground, where people got together to play footie or play on the swings. To the left of my window stood the roof of the conservatory. Often the cats would climb up the garden wall, onto this roof and brazenly leap from it to my windowsill, and enter my room.

One day I could see Kiwi was about to attempt this feat so I shut the window as I didn't want to be disturbed. Minutes later I saw a blur of black fur in my peripheral vision and heard the sound of claws scraping down brickwork.

Alarmed, I opened the window and looked out to see Kiwi, shaking himself off, heading back to the garden wall and trying again.

I left the window open.

(By the way, I've a Medium account where I've started writing again. I think blogging might be making a comeback...