Tales from the Lodge and The Joys of Portmanteau Horror 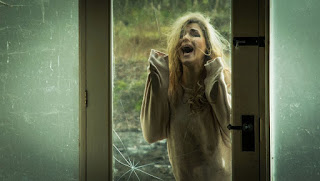 After much anticipation, I got to see the new portmanteau horror/comedy film ‘Tales from the Lodge’ this week. It’s written and directed by Abigail Blackmore, who was a key member of the ‘Class of 2008’ on Twitter, of which I was lucky enough to play a small part, if only mostly as a spectator.

But more of that anon. (That means nearer the end, Gran).

The set-up is pleasingly familiar, A bunch of thirtysomething pals reunite at a remote holiday cottage to memorialise their friend and spread his ashes more or less on the adjoining lake. It’s ‘The Big Chill’ and ‘Peter’s Friends’ with the prospect of fun and high-anxiety and these are both delivered in spades.

I really liked ‘Tales from the Lodge’. For lots of reasons. But not least because it is funny and savvy and very understanding of the genre and the tropes it is consistently riffing on. There’s a hint of the iconoclast about it too, as it gives the horror film a bit of a shake and then enjoys the sounds of the bones as they rattle. But, as with everything good, there’s a bit more than just that going on.

After an initial viewing to enjoy the gags and the banter and the jumps and the shivers, a second viewing is rewarded by a creeping realisation that the characters' stories are all efforts on their parts to confess something about themselves to the others. Lurking just beneath the banter and the comradely fun, there is an undercurrent of guilt and betrayal and of truths longing to be told. The film rewards a little scratching at the surface fun. Could it be that the lodge itself is a metaphor for the heart (a very present theme within the narrative) and that the tales that emerge from within that isolated house are really coming from that much deeper place.

But more of that anon (or maybe not, maybe that’s quite enough of that).

To some extent, I was born and raised on Portmanteau horror. Those great Amicus film were shown in cinema matinees when we just kids and I loved them. I also got to see Night Gallery on telly when it first came out and the Roddy McDowell segment from the pilot still lives with me to this day. And yes, I could also do the argument that Night Gallery was anthology horror rather than portmanteau horror but, hey, time is short and we all have places we need to be. In addition to the movies there were also the comics. In my neck of the woods, in the early seventies, it was Creepy and Eerie comics that ruled the roost and both had dubiously-related gatekeepers who guided us through the even-more-dubious content within.

But, hands down, the granddaddy winner of them all, was the movie ‘Tales from the Crypt’. I can’t say exactly when I saw it but I read that it came out in 1972 and I saw it in a matinee so I’d make a conservative estimate that I caught it in 1973 when I was all of ten years old. For ten-year-old me, it was sheer perfection. Serial killer Santa, Monkey’s Paw twists and, king of kings, Peter Cushing’s sad old Mr. Grimsdyke coming back from the dead to wreak poetic justice. I don’t think I even knew what Valentine’s Day was. All I got was this dude was scrabbling out of his grave to straighten things out and, man, that was all I needed to know.

The characters in these stories were often poor enough examples of the human race. People did nasty things and met their comeuppance. The stories came short and sharp, such that if you didn’t like one there would always be another along in a little while. But, for me, the main trope of Portmanteau Horror was always that everything was simply not going to be all right. There may be fun and shivers and incredulous laughs along the way but you could always rely on the fact that everything was going to end shittily.

Tales from the Lodge uses all of that and shakes it up and plays with it too. It even manages to maintain the tradition of using high profile and talented actors to feature in the stories (and in the film entire). It combines the traditional 70’s schlock with more modern tropes, such as the one where characters in the stories sometimes lip sync the narrator saying their dialogue. Something that TV’s Drunk History series did so well.

A word, too, for the music. Warren Bennett has written more tunes for the moving image than I’ve had hot dinners and here his work is reflective and jumpy by turns and always with that trademark musicality of his. 'Sweet Billy Pilgrim' also features prominently on the soundtrack with my own favorite ‘Arrived at Upside Down’ sneaking in, to great effect.

Abi’s direction and writing are spot on. I’ve always greatly admired how she effortlessly captures the gentle ribbing of good friends. I have no doubt it is her unfailing determination to get work done and seen that has driven this project to its full fruition. I hope and expect it will open creaking doors to ever escalating levels of horror and fun.

One final point, and I feel you will have sensed this already in the subtext. The film is about old friends meeting up, the joy of seeing each other again mixed with the bitter-sweet ache of missing those who cannot be around to share in the fun.

Life mimics art. Doesn’t it though? So many of the names associated with the project are names I have known for so long. People who I have come to care about and, although we may never meet or shake hands, who have become friends. For me, there is at least some element of this film echoing that. Reading the credits was, for me, something of an emotional experience. To see that Warren and Tim sat down together to write one of the songs. To see Bob thanked right at the top of the list. To see Jana and Julian in there as they would always be. It’s a great warm thing that transcends the creation whilst also remaining an integral part of it.

But, all that aside, I greatly enjoyed ‘Tales from the Lodge’ for the fun, naughty, four-wheel-drive joy ride that it is. I also sensed some subtle current of real-life concerns running beneath all the Grand Guignol happenings as they swiftly unfolded. We need that.

Can I watch it again?

Hi Ken
I still watch the Amicus movies from time to time, however Night Gallery is another matter. It's not the arguement between Portmanteau & Anthology , I saw 'The Doll' story when I was about 8 or 9 scared the sheet out of me & now almost 50 years later I'm not scared to admit ,it probably still would today, I just can't bring myself to watch it again, Hope you're keeping well Ken
GH

I'd not even heard of this film but I've now bought a copy off the back of this story. Thanks, as ever, for opening my eyes to things I might otherwise have missed out on.