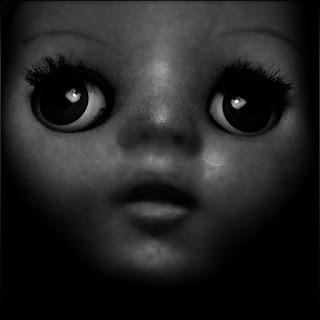 Peter hit the bedroom at about ten past midnight. He got undressed in the dark as quickly as he could. The light from up the hallway gave him a little dim guidance. He was just slipping his ancient green t-shirt over his head when his wife woke up.

At first, she twitched and mumbled something incoherent but then, receiving some subtle information about a presence in her room, she sat bolt upright are stared dark eyed into the murk.

But it was too late, just like it was always too late.

Jennifer turned slowly and registered the short, dark figure beside her bed. She did not register its gentle words. She drew in a rapid deep breath and then released it in a window rattling scream. She screamed in inconsolable terror. Her fear tore into every corner of the room: huge, viscous, unstoppable.

Then, when her breath was practically all gone, she snorted once and was silent. She looked straight at where Peter was standing and glared with pure undiluted hate at the dark space he occupied. Then she launched her head down deep into her mound of pillows and was instantly asleep again. Not just asleep; unconscious, comatose, almost dead… until morning.

So it was. Eleven years of marriage and so many nights had been the same. No matter how silently he crept in - no matter how much he embraced the darkness - she still woke up; she still screamed.

And in the mornings, she remembered nothing.

Whenever it happened in that first year, he would prod her gently after the alarm sounded.

Sometimes he would poke a little harder.

“I woke you last night.”

“You should come in quieter.”

After that first year, he gave up. Sometimes she looked at him funny, in the mornings, perhaps sensing something.

“Do you ever scare me anymore, like you used to, when you come to bed?”

“That seems to have passed.”

If he ever went to bed at the same time as her, there was obviously no issue. But he could not go to sleep early like she needed to. He was a creature of the night and an early riser too. Six hours sleep seemed to be more than enough although sometimes he felt groggy. The intimacies of the relationship quickly evolved to fit into the morning time so there was nothing to do about the evenings.

Nothing at all to be done.

One night in every three, his wife practically died of fright at the presence of her husband in her room. Every morning she awoke and remembered nothing.

And he had grown accustomed to her terror.

Some nights he almost smiled to himself. Some nights he cursed under his breath and raised his eyes to the dark heavens beyond the ceiling.

One night, she threw a book at him. She grabbed it from the bedside table and launched it spinning at his head. It was a library book and the sharp laminated corner had caught him on the forehead and drew a droplet of blood.

“What happened to you?” she asked, the next morning, her mouth full of Sultana Bran.

One night, they had an argument just before her bedtime. Nothing particularly new, some furrow they had ploughed together many times before. She went to bed angry and he stayed up angry. While she found the oblivion of sleep, he paced the living room and craved resolution, all the time knowing that nothing was possible until at least the morning.

He undressed quietly in the room, despite his anger. As ever, he left the door open slightly so that he could navigate his undressing by the hall light. He kicked off his jeans and left them where they fell on the floor.

Then she was not. Her eyes translucent in the gloom.

Always, at this moment, he would try to reassure her.

But, on this last night, he was tired and upset.

Still he said nothing. He could feel her fear rising.

Finally, he could bear it no more.

She stared at him. She wouldn’t remember any of it in the morning. None of it meant anything.

She stared at him.

She stared at him for a long moment. It was time for her to scream. It was time. But she didn’t. She simply snorted, turned and plunged into the pillows.

In the morning she stared at him over her Sultana Bran, her mouth a thin line.

“You remember this one, don’t you?”

She snorted dismissively, as if it were midnight again.

“I remember them all,” she said.

That final line really pulled me up short - quite stunning. A story clearly written by a man who understands horror. And marriage.