Girl on a Bus 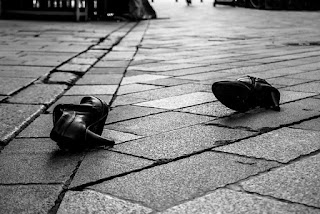 What can you do? It’s hard to know.

Last night, my son was out with his pals, celebrating the end of the toughest exams we ever do in this country. In this town, for better or worse, lots of young people get on a bus to go to the next town to do most of their partying. The bus was due back in town at 3.30 am and I was there, in the centre of town, in my car, waiting to meet it.

As I waited, a bus pulled in but it wasn’t the bus I was waiting for. There are lots of buses that come and go, ferrying. Lots of people got off this bus, most of them in their late teens or early twenties. There was some chatting and hugging and removal of high heel shoes to aid walking and then everyone pretty much dispersed, to seek a taxi or cadge a lift or perhaps to begin a long weary walk home.

The girl was the last off the bus. She was alone. Late teens/early twenties, like the others, but she didn’t chat or hug or take off her shoes. She simply turned her face down the street and headed for home.

She was drunk. She was possibly as drunk as one can be while still remaining upright. She walked in jagged, robotic steps and she frequently strayed from the footpath and on to the road before correcting her trajectory. And ‘trajectory’ is the right word, she moved fast, keen to be home perhaps. Her head projected quite far in front of her torso which gave her walk the impression of someone aspiring to fall forward onto her face but never quite succeeding.

Truth? My heart went out to her. She seemed so vulnerable, so drunk, so alone. She seemed like an accident waiting to happen. If my son had arrived and got in the car, I would have driven after her and asked if we could both drop her home. There might have been some difficulty in figuring out where her house was or even some puke in the back of the car but at least she’d be safe. But the boy’s bus was still ten minutes out the road and 55-year-old men can’t be going around offering lifts to late-teen drunk girls, no matter how well-meaning that offer might be.

So it was with a feeling of helplessness that I watched her in my rear-view mirror as she careened towards her destination. I hope she got there okay. I’m sure she did. There are girls and boys like that abroad on our streets on any given weekend night. Two too many under their belt, sheets to the wind, just trying to get themselves home.

We may tend to think of our grown children as big enough to go out in the world and then make their own way back when they’re done and generally, I suppose, this is the case. But the world is a wonderful place that can turn awfully cruel from time to time and we have to look out for each other as much as we can. As much as we can without becoming part of the problem ourselves.

You can carve on it my gravestone because it is an indisputable truth about me. I’m not looking to do anyone harm or make matters worse or benefit from anyone’s misfortune. I mean well. But that doesn’t mean that everything I do is right or even for the best.

One simple example. When you drive up the main road in my town, getting on to the street where I live involves making a right-hand turn across busy traffic. It's hard. The drivers who try to come out of my side street also have a horrible time getting into the unremitting stream of traffic on that main road, particularly if they're trying to turn right. I know because I am one of them on a daily basis. Sometimes, as I come up that main road, I will try to help. I will wave a car out from the side road, across the oncoming traffic.

Yesterday, as I approached, there was a car waiting in my side road. I slowed and caught the driver’s eye and indicated that he could come out when it was clear the other way and I would wait for him.

Great, fine. Except that’s an awful lot of intent to try to impart with one hand gesture and the driver in the side street clearly got my intentions wrong. He thought my gesture meant, “I’m letting you out now, Go, Go, Go,” and he ‘Went, Went, Went’ without looking to see if there were any cars coming the other way. There are always cars coming the other way. There was much braking and swerving and swearing and, thankfully nobody got hurt or even dented.

My fault. My good deed. My fault.

I’m glad the girl off the bus didn’t appear on the local news on Saturday morning. I’m glad she must have stumbled somehow to her front door, fumbled with a key, and landed rather heavily a couch or a bed.  If she hadn’t, I would have found it hard to forgive myself for sitting quietly and watching her as she got progressively smaller in my rear-view mirror and eventually vanished around the corner down at the priest’s house.

But what the hell could I have done that might not have made things markedly worse?

Why’s lying so wrong whilst keeping up appearances is okay? Isn’t it every bit as bad to pretend to be something you’re not? Ethics and morals have always puzzled the hell out of me, what other people argue is right and proper as opposed to what we know (or at least believe) to be right and proper. And then there’re those damnable grey areas: acceptable behaviour, boundaries and mitigating circumstances. It used to be straightforward. Now we second guess everything and mostly end up doing sod all because it’s the safest option. Look after number one first and let the world and its weans fend for themselves.

They did an experiment once in one of America’s metropolises, a woman pretended to be injured and they watched to see how long it would take a passer-by to play Good Samaritan. And it was like half an hour or something ridiculous before someone bent down to see how she was. I mean it wasn’t half an hour before someone came along—they picked a busy enough thoroughfare—it was half an hour before someone was willing to put personal considerations aside (fear of being sued mostly likely, liticaphobia or litigaphobia in case you wondered) and do the humanitarian thing. And, of course, they repeated the experiment and the same happened over and over again.

Guilt’s an odd thing too. The experience of it helps us learn from our mistakes; the anticipation of it prevents us from damaging relationships. We don’t like to feel guilty and so modify our behaviour accordingly. And yet here you are not doing something you know you’ll feel guilty for—hell, you’re feeling guilty while you’re not doing it—because it’s the lesser of two evils. Better to feel a twinge of guilt than the unknown (xenophobia since I’m showing off). You’ve experienced guilt before. You know you can hack it. It’s not so bad. Toothache’s worse.

What a world we live in. What a shitty, shitty world.

I suppose this comparison stings a bit because, in that experiment, I would be the person that stops. "Not brag, just fact," as some guy in the old cowboy movies used to say. I couldn't help but stop.

But this is different. This is a largely insensible girl all alone on a street at 3.30 am.

It's an unpleasant quandary, that's for sure.