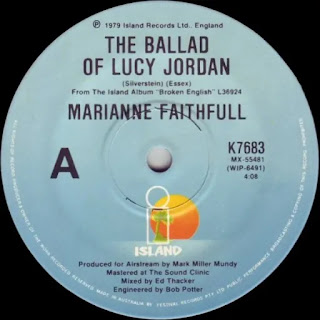 Sometimes, mostly when driving, I use the expression ‘Four Eyes’ in a derogatory sense.

In fairness, there isn’t really a non-derogatory sense in which to use it so maybe just ignore that.

I’ll say it when that other driver does something typically stupid and inconsiderate. And is wearing glasses, of course.

I really only use it when there’s somebody in the passenger seat and I sense that my usual stream of undiluted abuse might be viewed as a little over-the-top or clinically insane of some such thing.

I did it the other day and the person in the passenger seat turned to me and grinned and said, “I hate to break this to you but…”

Yet still I call other people 'Four Eyes'. What’s that all about?

I haven’t really thought of myself as ever wearing glasses. In much the same way as I haven’t thought of myself being the age I am. I've always been quite a way behind reality in who I think I am, how I think I look, and what I'm going to achieve. One side effect of this is that I haven’t ever really given up on things. Things like twenty-twenty vision or youth or crazy dreams.

Until these days. Until now.

But we’ll come to that…

I’ve always had some pretty outlandish dreams of how my life would go. When I was twelve, I was pretty sure I would play James Bond someday. Don’t get me wrong, I didn’t think I would actually be James Bond just that I would be the actor playing the part in the movies. I didn’t see anything overly difficult in achieving this proposition either. I had no illusions that I was a good-looking kid (I wasn’t) but I didn’t see ‘good looking’ as a requirement for playing the part of the secret agent. I figured I would manage it all right, without too much bother.

Then, in my twenties, I figured I would be a writer and would one day be primarily known as a writer. That outlandish dream pretty-much persisted through my thirties and forties too.

Remember Lucy Jordan? That lady in Marianne Faithful’s song seemed to let her dreams go relatively early on. At the age of thirty-seven, she’s already realised she'd never ride through Paris in a sports car with the warm wind in her hair. At thirty-seven, most of my crazy dreams were still going full tilt. I always thought Lucy Jordan should have held out a while longer. And, yes, yes, you may say she did get to ride in the car blah blah but I don't think she did really.

(As a side note, I just looked up Google to get the name of the titular lady who gave up her dreams in that song. What I got was ‘The Ballad of Lucy Jordan HD’. I then spent an embarrassing 15 seconds wondering what the ‘HD’ stood for. Was she some kind of doctor or something? I figured it out eventually.)

But now here I am, deep in my fifties and things have changed, even for me. These days, when I call that driver in the other car ‘Four Eyes’, there’s a bit of self-awareness and irony thrown in there along with all the ire. Realisation is finally dawning, I think. Not all of your dreams tend to come true.

At the age of fifty-six, Marianne might sing of me that I realised I would never play James Bond, nor drive without glasses, nor be known primarily as a writer. Whereas, up until this point, I had usually felt a decade or two younger than I actually was, So often now, I feel my true age or even a little older. Real life seems to have finally caught up with me. Some aspects of it have even passed me by.

But all is not yet completely lost.

I’m sitting here after midnight, typing away and there’s still time for some silly dreams to come true. Some day yet, I may be known as a writer as well as being known as that pretty nice guy, occasionally funny, and quite irritating to a number of people.

…even though he is clearly wearing glasses too.

I get where you're coming from - now that I'm in my very late mid-forties (forty-nine and three quarters), I still feel twenty-eight and occasionally act fourteen. Mirrors perpetually disappoint and/or frighten me.

I can also totally associate with the summation "pretty nice guy, occasionally funny, and quite irritating to a number of people", although I suspect that I may be considerably more tiresome than I allow myself to believe.

Interesting. I was just listening to Broken English a couple of days ago and thinking what a damn good album it was. A lot of albums have two or three decent tracks, the ones that end up as singles, and the rest are meh but not this one. Hard to even pick a favourite track.

I remember the first time I was called “four eyes” as if it was yesterday. It was in Twickenham in London and I’d be about eight. In fact I’ll bet I was eight and I can say that because that was the year I gave up collecting Matchbox cars and in 1968 Mattel brought out Hot Wheels. Talk about timing. Anyway I’d disentangled myself from the family and was walking down the street on my own when a couple of boys ages with me passed, yelled out “four eyes” and then scarpered tout de suite and I remember how tame and frankly laughable I found the insult. I’m Scottish and that’s not the kind of jibe you’d use unless you were a three-year-old and your mum was in earshot.

As regards my hopes and aspirations… I took my last quarterhearted stab at fame twelve years ago and clearly backed the wrong horse. Blogs didn’t take off, e-books ruined any chance of being discovered through self-publishing and then the economy and my health took a nosedive and it all became too much work. I haven’t felt my true ago since I was maybe twelve. I kept waiting on catching up but when I look in the mirror these days I see a bleary-eyed seventy-year-old man peering back at me and sometimes the disappointment I see in his face is hard to bear.