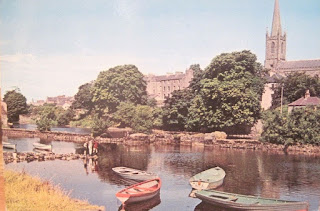 On Thursday, I met Tom on the street as I was walking home from work for a sandwich. Tom is not his real name but let’s run with that anyway.

I was glad to see him out and about and I told him as much. Tom had recently had a tumble which had put him in hospital and laid him up quite badly and it was good to see him walking confidently home from his hospital appointment. I offer to ‘shake his wrong hand’ as there was a walking stick in the right one but he adeptly switched hands without a bother and we did it the old-fashioned way.

We got to talking for a while, as we generally do when we meet and, because we are both from Sligo, the discussion soon came around to there and to the people we both might know from there.

Tom mentioned a new book that he thought I might like, where the writer evokes memories of old Sligo very well, he thought I would enjoy it. If this blog was any use at all, I would now tell you for sure what this book is and where you might get it but, alas, the substance of certain conversations can slip between the cracks in the loose paving of my memory and that’s just how it is. I’m pretty sure the book is ‘Fifty Poems’ by Michael Gorman because I’ve looked it up and that seems right. It looks lovely and I may hint about it as a possible Christmas pressie. I actually heard Michael reading the first poem from the collection on my radio a few weeks ago so I knew a little more about it than I thought. Plus, in truest Sligo fashion, I would have known some of the writer’s people, having grown up with them in seventies Sligo and having liked them very much indeed.

But that’s not the point. Or, at least, it’s only part of the point.

In talking about Sligo and its characters who are long gone, Tom was obviously reminded of one such person.

“Would you have known Aloysius?”

It was a fair question; Tom is a little bit older than I am. The gap certainly seems less every year but he still has a few seasons on me. It might just be that Aloysius was gone by the time I was out and about in Sligo. But no, I remembered Aloysius well.

And here we come to another memory problem for me. Although Aloysius is vivid in my memory, I cannot quite pin him down enough to describe him. The only thing l I can offer is more of an impressionist sketch than a description.

So here I go with that.

First of all, Aloysius was a man who was intellectually challenged. Although we would not have said so many syllables at the time. We would probably have said that he was ‘a bit simple’ and, with some awareness of how that sounds today, we would have meant absolutely no harm or even disrespect with it. It was simply the case and these were the words we had to reflect it.

Aloysius would also have had some physical challenges which meant that his body was contorted and his face presented a remarkable and amazingly open portrait. He spent the days of his life traversing the town at breakneck speed, smiling and greeting all the people he met with laughter and enormous enthusiasm.

Someone may come and correct me. They may say he was not like that at all. But that his how I remember him. His dark clothes, his jacket draped askance on his broad shoulders, his heavy eyebrows, his broad grin.

But that’s not the point either. Not really. The point is this:

When Tom mentioned Aloysius, and I remembered him as I have not done for years, I felt a great warmth inside of me. The evoked memory of the man, gone at least forty years, caused a wave of nostalgia and memory and fondness to break over my head. It caused a good feeling that stayed with me for a time, as I went on about my day.

Why is it, I wonder, that the simple people stay so fondly in our memories. For that is the case, at least with me. Do they come to stand as ambassadors for those times that were simpler in themselves, or at least seem to be?

All I know is that, when Tom asked him if I remembered Aloysius, I smiled and nodded and said with some warmth:

Hi Ken, Your description of Aloysius is spot on. I often thought a very funny book or play could be written on his exploits & sayings. 'Do Ye Know Me Mother?' was a familiar one, some other more risque ones too.He was in truth a harmless soul, we had characters in our youth,with Al, Jimmy , & George, who used to cycle into town dressed as a nurse, there was a play written about him, the name however escapes me. Looking at the pic of Riverside Is Michael or Eddie in it? some other of your neighbours are in it, that place was so beautiful then, only to be ruined by characterless cast concrete today, progress? I wonder. Hope you're keeping well
GH

Hi George. You have an amazing memory. Yes, I believe both Eddie and Michael are in that postcard picture. I'm not (too young) :) I think you might be thinking of 'The Man in Woman's Shoes' which I 100% know you would love. Pure Sligo from start to finish with lots of familiar things in there.

I suppose everyone has an Aloysius. Mine was the crazy guy from the asylum who used to pass by our school and suffer all kinds of verbal abuse from the kids but never me I hasten to add. He was scary-looking and it always puzzled the hell out of me why he never leapt over the school wall to tear into his abusers but he never did. Oh, he roared at them but that was it. I never knew his real name and I’ll be honest I’ve forgotten what the kids called him or even really what he looked like other than vaguely Beckettian before I knew what I might mean by that. But I’ve never forgotten him nor the look in his eyes. I’ve seen it since in the eyes of cages bears.

I love the way that a shared memory always invokes a wave of nostalgia. I'm acutely aware that the nostalgia is very often far more pleasurable than the time itself was, but I think that's because a great deal of life needs to be enjoyed in retrospect. It's a cliche that you never know what you have until it's gone but I think that it's actually true of a great many things in life: I have had friendships, relationships and jobs that I enjoyed at the time but which I miss out of all proportion to that. The thing is, it was never just the place or the people, it was the age. Still, a shared memory is something special.