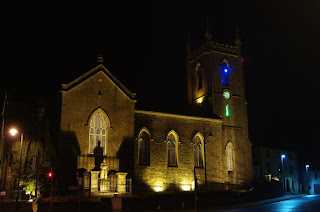 For the last number of Christmas holidays I have arrived at 2nd January, put on my work face, and said to myself, “That’s it, Ken, until 23rd December. Off we go.” And that has indeed been the case for the last number of years. Granted there has been a day off here and there and even a firm plan of a holiday but, apart from that, it’s been go, go, go from January until December.

That’s the main reason I tend to say, “Thank goodness for Christmas,” these days. I get to stop.

All going well, after a few hours of tidying stuff on Monday, I can close the door of the office and be done until 2nd January. In theory, my time will be my own and I can do with it what I wish.

In practice, Christmas has its own well-worn routine and there is very little deviating from it. Early on Christmas Eve, there’ll be a visit to Anthony the Butcher for turkey and ham vittles. I see Anthony in his shop several times every week and we always put the world to rights before the dealing is done. On Christmas Eve though, it’ll be too hectic for too much chit-chat. There is lots to do. Lot of meaty goodies to dispatch. A few compliments of the season will have to suffice. Last year I won my turkey in Anthony’s raffle and that was the best-tasting goddamn turkey I ever had.

Christmas Eve afternoon becomes about the ham. It has to be cooked up in cider and various other things (top secret) then glazed and baked and… you know the score, you do it too. There’s a visit to a good friend’s house as the darkness deepens and the shops all miraculously close. The return home brings the irony of a house full of food and not a clue what to eat.

Later it’s midnight mass, which is well-over by midnight. I’m not much of a mass-goer anymore but I like the late evening Christmas Eve mass for all kinds of complex reasons, not least the knowledge that I’m probably stealing a prime seat from a regular attendee.

Christmas Day is all gifts and bracing walks and cooking and over-eating and sleeping in front of Strictly and being mildly disappointed with the Christmas Special of something and then, one of my favorites, a long lonesome walk through the deserted town centre. Only the occasional passing car and the occasional similar restless soul for company. This moment is special for me as it is the zenith – the furthest away I can get from work.

Stephen’s Day is visiting and family and board games and best ham competitions and fun.

My favourite borrowed moments from the holiday will be a nice easy book to read or a favourite movie revisited on telly or a new one that has been saved-up and finally enjoyed.

Christmas will be different this year and one sometimes feels it should almost not be. But we need to stop and breathe and eat a sweet and shake hands and smile whenever possible, despite everything.

So, roll on Christmas. Let’s do it together and try to make it nice in some small way for someone we meet who might be less fortunate than ourselves. I wish those reading this a happy and a warm one and only good things for the New Year, though I know that’s a bit of a tall order.

To those not reading this, my wish is exactly the same.

Sure, why wouldn’t it be?

Merry Christmas, even if you won't share your ham recipe! ;)

I hung onto Christmas for as long as I could. I don’t think I’m an especially sentimental person although I am prone to occasional fits of nostalgia or bouts of regret; it’s hard to tell the difference sometimes.

We don’t have a local butcher. The nearest one’s in the town centre and I’m pretty sure I’ve never darkened his door although, if I ever did, I’m sure the experience would be awash with not entirely unpleasant memories. The first packet of crisps—Golden Wonder “plain” crisps with the little sachet of salt—was handed to me in a butcher’s shop. Odd that I remember that particular first when so many others have slipped away.

Today’s our wedding anniversary—22 years although it feels like forever—not that we do much to celebrate the occasion with Christmas nipping at our heels. Carrie got me a copper dish rack this year which says about everything. She’s been quite good at finding something traditional each year.

Christmas for us will be on the 27th this year however. I couldn’t tell you the last time we had it on the 25th but I guess that’s true for so many who have to tip their hat to everyone who feels they deserve a slice of them and still squeeze in their own family celebrations. We don’t mind waiting a day or two although last year it was nearly a week which kind of pissed me off but you don’t say anything, do you? My daughter’s been at me for years to cut down and I do get it because the more I do the more she feels obliged to do but now frankly it feels like a token Christmas; we meet, have tea, catch up, exchange a few gifts (she got me down to three although I always cheat) and then she buggers off. No walks, no games, no TV. If we never celebrated it again I really wouldn’t miss it that much. I had a hankering for Golden Wonder Smokey Bacon crisps the other day and ended up with a packet of Walkers Smokey Bacon which were probably the same but they didn’t feel the same.

I’m glad Christmas is still something you get something out of. Long may it hang on in there. Have a good one, Ken. See you on the other side.

Have a very merry and work free Christmas, Ken.