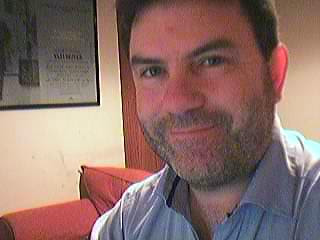 Although this is a writing blog, I don't talk about my own writing as much as I thought I was going to.

In case you're wondering if I've ever actually written anything, here's a list of my produced work. I'm only listing writing which has had a full production - there's loads and loads of un-produced material that will hopefully add to this list one day.

A Place in Between

Midnight in the Theatre of Blood

I Bet You Say That to All the Boys

A founder member of and actor with KODE Theatre Company (2004). Three productions to date:

One for the Road

Currently holding several 'reader' positions but sworn to secrecy on them all.

Finished my first one - hasn't everyone?

Now busy writing the second. I think it's going to be quite good.
Posted by Ken Armstrong at 18:32:00

Hi, it seems that I'll be in to you
I do like prose and its parts
I wish that u'll send me ur writing picsec as well as ur awsome photo which i'll hang in me rooooom

Thank you Anon. I think it's best if I just hang in my own room for now. But your suggestion makes me smile and I appreciate it very much. :) (See?)

Hi Ken, Paul here, I got your name through a book publishing event in Tallaght, as part of the Redonlinebookfestival. I am writing some short stories and plays at the moment. I based in Dublin. would you be available to meet up to have a chat re ideas and support?

Hi Paul, I'm afraid time and distance constraints would make that difficult to do. I'm in Mayo and very short of spare time these days. For what it's worth, you have my support and my advice is hugely overrated. :)

Have you sought out some of the writers groups and resources closer to you. I bet you have.