Should Have Gone to Edith?

There’s been a bit of an uproar lately over the use of an Edith Piaf recording in a 'Specsavers' advert.

In the radio version which I’ve heard, dear Edith is heard singing ‘‘Je Ne Regrette Rien’ while her words are translated (by Harry Hill, I think) as saying she does regret one thing… she should’ve gone to Specsavers.

Oh look, here's the TV version of the ad.

This doesn’t annoy me as much as it obviously does some people.

In a funny way, it helps to keep the music alive. It makes it accessible to the younger audience who seem to follow advertising music with a tangible mania.

This as was also a bit of a laugh, which is always good.

The bottom line is that the estate of Edith Piaf must have okayed it. So the rest of us can enjoy or hate it as we see fit. It doesn’t matter overly.

The estate of the late great Johnny Cash were not so forthcoming with their permissions for our old friend ‘Preparation H’ - the scourge of Haemorrhoids the world over. Well, maybe not ‘scourge’ exactly (winces).

Apparently, the makers of ‘Prep H’ decided that Cash’s seminal hit ‘Ring of Fire’ would be a great tune to have on an advert for their Piles Ointment and, let’s face it - well, maybe not 'face it' (winces again) - it would have been great fun.

But the Cash Estate said ‘No’, so we’ll just have to make do with Edith for now.

It all set me thinking, though, as to what popular songs I might use to sell particular products. I only came up with one, really. 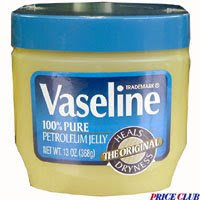 And my proposed song for the Advert is by Billy Ocean…

Oops, here it is:

So... any other good suggestions?

Oh, all right... any good suggestions?

Hilarious. I can't think of any myself, but if I do later I'll stop by and let you know.

You're a terrible person.

(And what in goodness' name is Entrecard?!)

It Rubs the Lotion on its Skin.

A link to the song.

I just thought I'd give this another run, now that I've learned how to embed YouTube videos. :)

Who could top your Vaseline choice? I'm not up for it, so will just enjoy the laugh!

Susan: It was sort of a rhetorical question anyway... I mean, who could top my Vaseline idea? Eh? Eh?

LOL. You are such a card.

Looks like Billy used your product to get into that outfit...yikes!

I think Edith Piaf is only known in Quebec in North America,not sure ? I still hear her in coffee shops.

I don't get the video....the words don't translate to what she's singing, except a couple of times ???

Rachel: Too kind. You are.

Alan: I'd say she's more widely known but could be wrong. It's a very simple idea - a false translation of the song is given in the subtitles, no real attempt to get it right. Your trouble is your too good at French. Go and get another babe-in-the-shower video on your blog, I'll be along later to view it. :)

Thanks for giving me a good laugh as well as enjoyment in listening to Edith Piaf.

"You shake my nerves and you rattle my brain, Too much love drives a man insane"

Sueblimely: (Great Name) I think 'Great Balls of Fire might be better for the 'Prep H'... isn't it a tad 'jittery' for the 'Vaseline'? Somebody might get burned. :)

Fickleminded: HNY to you too teddy bear!

None off the top of my head, but I have to say that the Piaf song hasn't annoyed me in the least.

You are a hoot!

Happiest of New Years to you, Ken.

You really are sick. It's one of the things I like about you!

Dave: Have you been hitting the liqueur-choccies again? Rachel thinks so too! :)

Reese: Sick in the mind, physically I am fine. (Just wanted to clarify that). :)

Hi Ken, no suggestions forthcoming from me, wouldn't have the head for it but enjoyed the read : )...also had a read of some of your other work... mighty good stuff there...cheers.

We've had this discussion many times around here. Our favourite choice for missed opportunity by a marketing group is Burton Cummings (formerly of The Guess Who) - for the song "Stand Tall". Now - why wouldn't they use that for Viagra or Cialis? I just don't know.

Incidentally - the refrain goes, "Stand tall, and don't you fall...all you're feeling right now, is silly human pride." (and later...you've got me down on my knees - whoops!)

Hi Liz, thanks, I'll be around you blog for a good look, if I can get you off the phone to Susan :)

Jees Kat, I thought I was lowering the bar... you've jumped straight for Viagra! (well done) :)

Well, it wasn't just off the top of my head - we've been waiting for this one to show up for ages.

I don't really have any music in mind. But I always thought Raisin Bran (high fiber) cereal or Metamucil fiber drink should team up with Charmin toilet paper.

I think they go together like milk and Oreos.

Kat: sorry to keep you waiting so long :)

Cardio girl: I always think a toilet paper company should use the slogan 'Better on the Whole'... :)