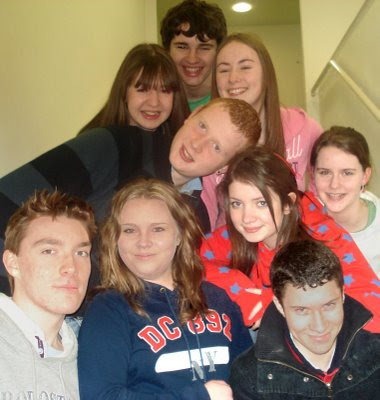 As discussed somewhere previously, I don't ever talk about what I'm currently writing.
I don't talk much about things I've finished writing either.

I don't really talk much about writing at all. Which is odd, because I thought I would.

Anyway, here's a short extract from one of my more recent theatre plays for teens. It's called 'Midnight in the Theatre of Blood' and it isn't exactly about what you might guess it is about.

That's the original cast, by the way, on the right.

TESS: Hi. You wanted me, after the loo. God that sounds so wrong.

He pauses, kicks around the hall.

TESS: You have to. I'm hanging now.

SEAN: It's just that... God, it's like cutting open the metaphorical feather pillow out of a first
floor window.

TESS: You're doing it again.

SEAN: Sorry. What I mean is; If you throw all of the feathers out of the window, you can try
and try but you'll never get them all back in the pillow . The garden will never be
the same again.

TESS: Stop! If you say I'm clever it will imply you didn't think I was clever before and
Pandora's Box will be well and truly open.

He kicks around a bit more, struggling.

TESS: Ever hear of Morrissey?

SEAN: Weird kind of guy. Branch in his back pocket or something... 'Meat is Murder'!

TESS: It fairly aptly addressed our situation here, I think. It went...

TESS speaks the next lines kindly.

TESS: "Shyness is nice but... shyness can stop you from doing all the things in life you'd like to..."

She starts to sing, softly and quite sweetly.

TESS launches into a manic little version of 'Ask Me' dancing and all.

SEAN: I love you.

SEAN: Shit, shit shit shit. I did it.

TESS: You did what?

SEAN: I cut the pillow, I opened the box. The feathers are everywhere.

TESS: Poor Mr Obtuse. Listen the feathers might be out but... they don't look so bad.

TESS: Maybe though, just for a while, we could pretend they're not actually 'feathers'.
Maybe they could be just a sort of 'synthetic foam stuffing' - or something - until we
see how we... get on... And then we could worry about them turning into actual feathers...
at some... unspecified... later date.

SEAN: That sounds good to me.

TESS: That's good (laughs) 'cos I don't have a bloody clue what I just said.

Makes me want to write a play, it's been quite awhile since I've done that myself. Nice job. :)

(In case you didn't catch that, I thought that was brilliant). =P

Always interesting to see what you're up to. And nice integration of The Smiths song, as well. :)

You write teenagers so well. This one short scene works so beautifully alone; I enjoyed it a lot.

I smiled to see Morrissey mentioned! I used to sing the baby asleep with How Soon Is Now because it was the only thing that always worked!

Do kids in Ireland really talk that way? Feathers? Obtuse? Foam stuffing? I understand it's a play and it's well-written, but I never thought that way as a teen. It's creative and well written, but do people buy it?

Funny band the Smiths - people who hate them think they're about misery, people who like them think the songs are really very light and sweet. I'm in the latter category.
And there are lots of different kinds of teenagers...
x

I enjoy that you wrote that here... that's what we do in Blogdom right?

Kevin: Thanks. It took me a while but I finally got around to it.

Fragileheart: Thank you, I really appreciate that. :)

Jenn: The Smiths are great... but I really didn't think so, back when they were first popular.

Susan: I like writing teens and am compliment by your comment, thanks. Singing the Smith was cool-and-trendy. I sang 'If all the raindrops' and 'All the Tired Horse' off Dylan's 'Self Portrait.

MAtt: Very interesting comment, thanks! I could spend a few pages answering it but I will be brief. Theatre is an interesting medium which seems to respond well to the use of heightened language and dialogue. Perhaps it something to do with the way the actors have to 'project' to reach the back of the house. 'Regular' dialogue (TV/Movie) can seem under-played and stilted. Conversely, we will often see theatre on TV or film coming across as broad and unsubtle. So, yes, in my experience, it seems to work.

Also my, not inconsiderable experience of working with modern teens has left me in awe of the level of knowledge and wit which abounds. :)

Rachel: Smiths *are* sweet, with a little something tart mixed in... :)

Ken, great discussion. I don't mean to be patronizing or belittling or insulting in any way. Kids are very brilliant. It's just use of language like that in such complex sentences seems forced without context. Maybe that's just me. Two examples, I don't know if you're familiar with them or not. The first is Cheers, but more especially Frasier. The language that Frazier and his brother Nigel used was like this dialog exactly. It worked on the television show because it was intelligent, but also a bit pretentious, which Frazier's father always pointed out to both Frazier and Nigel for comic effect. It's the same way that Sam and Carla always poked fun at Diane on Cheers.

Another example is Dawson's Creek, the show that launched Joshua Jackson, James VanDerBeek, Michelle Williams and Katie Holmes. They DID speak in language like this and the show was critically well received here in the states, but the characters were perceived a bit as nerds in their school and portrayed as incredibly smart in their niches.

The writing worked both for Frasier/Cheers and Dawson's Creek because it made use of the inherent pretentiousness of the language in the characterizations of the characters in question often for great comic effect.

You're just posting an excerpt, so I guess it just seems a bit awkward to me since I don't have the context of the scene and any of the careful character development that undoubtedly took place prior to this scene.

I would be fascinated to know the history of the characters using this language and how they are perceived by their peers in the context of the play.

As always a delight to read. I shared it with my teen aged son who also enjoyed it, then again, he has a hard time letting the feathers out of the pillow himself at times.

@Matt: Are you a writer as well? I'm just curious as to why you weren't able to appreciate the writing for that it is. There is nothing wrong with wanting to know a bit of background on the characters - you just have me curious now is all.

Matt: No, no patronising or belittling or... that other thing... is taken.

Context does count for something and I don't like to go too deep into the plays here - I just like to throw out a scrap or two, usually when the planned post isn't yet up to standard. :)

My last comment was probably a bit too right-brained to correctly reflect the way I write. I often finds that the rare magic moments occur when logic goes out the window and instinct and emotion kicks in. I don't think I thought about this scene too hard - I went with the flow of it and when it started to seem a little excessively flowery, well, this time, I just kept going. I *did* work well in performance and people remarked upon it afterward so I'm pleased with it still. My old 'reason for everything' applies, I think: There is a little truth in it, and a little truth goes a long way in these things.

Debbie: Glad you enjoyed but gladder still that Wisdom-Hypnosis-Junior enjoyed too. He's the target audience in many ways (but not in all ways). Our own crew seemed to pick it up and run with it, which was most gratifying.

Reggie: I *love* it when you stick up for me. Reggie's in my corner, folks, watch out! I do thrive on constructive criticism though... Except yours, then I just get kinda sad... :)

Heh, the only criticism you'll ever get from me is if you ever stop writing.

And you're welcome - I'm being honest though. I'm as curious as a cat now!! lol

Okay, my curiosity is easier to settle. Can you point out which two souls in the picture had this scene?

I loved the word play. Then again I always do.

Hope: That's the question I wondered whether anyone would ask. Well done you! :)The enigmatic young man at the lower right of the picture played the boy's role and the girl... is the only cast member missing from this picture. Ellen? Where did you go?

Also interesting about this picture (and I'm giving too much away here) one of the girls in the picture plays a 'ghost' in the play. Oddly enough, she seems to me to be lit differently to everyone else in this photo (which she wasn't). That's her in the middle - am I mad?

You know me...the fun is in the oddest details.

If you're talking about the young lady in red, she does seem to have a "glow" about her that the rest don't possess...pardon the pun. :)

Funny, the two lads which stood out to me in that photo were the two at the bottom: the one on the left looked sweetly charming and the one on the right looked charmingly devilish.

I look *gross* in that photograph.

But I love the extract as always.

You have a way with words. You could be an awesome scriptwriter. Your dialogues are witty and expressive.Way to go Ken.