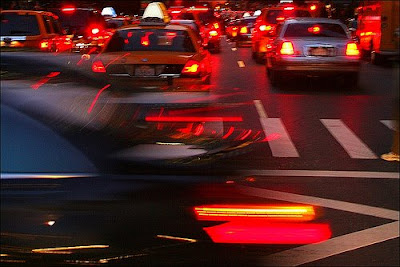 The term 'New York Minute' refers to a very short space of time. The definition was eternally enhanced by Johnny Carson some years ago.


He explained that a 'New York Minute' was the space of time which elapsed between an NY traffic light going green and the car behind you beeping its horn.

So now you know.

And because (in fairness) that tidbit is, at best, only moderately interesting, here as a bonus, is another song title explained.

The term 'Blue Moon' turns up in many a good old song including that perennial favorite 'Blue Moon'. Yes, it's in there somewhere, take my word for it. But what exactly is a 'Blue Moon'? Not everyone knows. Even if you, apparently, do.

Sometimes you get two full moons in one calendar month, particularly if the first full moon occurs on the first or second of the month. When that happens, another should come along about 28 days later.

The term 'Blue Moon' refers to the second full moon in a single month and, because it is a bit rare, the term 'once in a blue moon' refers to something that doesn't happen very often.

And there you all thought that you were finished with learning-and-such.

Can you perhaps explain any other song titles to me?

I quest for lyrical knowledge.

The Texas settlers of the 19th C. dreaded what they called the Comanche moon, for the light of the full moon greatly extended the range of the most feared Indian warriors ever. Most homes had trap doors covered with a rug. When Comanches were reported, the inhabitants disappeared through the door to seek refuge under the house.

There's a great moment in one of Larry McMurtry's Lonesome Dove novels, where a greenhorn claims to have survived an encounter with a Comanche:

"Then it wasn't a Comanche."

There's also the Harvest Moon, which is a full orange moon that appears when the moon is closest to the earth.

Wow, I'm the first to comment , A very rare occurrence.

That's enlightening - the New York minute. Let me see, what about :

"Time in a Bottle" - time that you would want to savor and freeze forever? This song is from Jim Croce.

"Dust in the Wind" -By KANSAS, This song on the other hand is about us being just a passing beings -like dusts in the wind.

These two songs all refer to time. I remember one thing I have read which says that the only thing that goes on forever is time. The earth and the universe may vanish but time ticks on forever.

it's really funny how that green light seems to turn on the horn of car behind you automatically.

I got a song title, what does 'Purple Rain' means? (I'm sure you know Prince)

I'm afraid I won't have any knowledge to share with you but I just wanted to thank you for explaining those two to me =) I'm sure there is a lot more I can learn from you dear Ken!

Now that is a nice bit of trivia. I have never heard the bit about the 'blue moon'. Shows you, we all use sayings without really knowing what they mean.

I didn't know about the origins of the 'New York minute' phrase, so thank you. And me from NYC! I like that song, too, we used to listen to that - well, it was a cassette tape back then - in the early 90s a lot, so to me it brings back that time...

I either didn't know that or I'd forgotten it - like I do once in a blue moon.

I was a bit surprised recently when I had to explain a "three dog night" to a neighbour; I thought the band of the same name had made the meaning more well-known.

Just in case someone else besides my neighbour doesn't know, it's American South for a very very very cold night: so cold that you need three hound dogs in the bed to keep warm through it.

I miss the South for many reasons, but their language and colourful expressions are near the top. Right by the FOOD, which is the top. And the hot summers...

Look I'm leaving here before I talk myself onto an airplane!!

My favorite song title is "What's the frequency, Kenneth?" by REM. I'm sure you already know this, but it was from when Dan Rather was attacked and the mugger kept saying that phrase to him. And, it's a great song.

Hi 'K' thanks. I remember that 'Lonesome Dove' exchange. Brilliant!

Jena: What about that indeed! "If the world should stop revolving, spinning slowly down to die, I'd spend the end with you..." Remember that one? :)

Roy: Yes, I do 'know' Prince, I saw him in Wembley Arena many Comanche Moons ago :) I went off to try to find out about Purple Rain but only got nerdy discussions which went around and around... it was great! :)

Reggie: I can teach you nothing more grasshopper, go out into the world with your... em... bucket list.

Lyndi: I loved finding out about 'Blue Moon' :) Hopefully Cecilia will come by and explain her song to us. :)

Lydian: Hi (nice to see you on Twitter) I think New York Minute might have been around before Carson put his memorable twist on it.

Dave: I'm sure you've forgotten more than I'll ever know about many things - this is a compliment, not a taunt on your faculties. :)

OH I *love* 'Three Dog Night'. Never heard it before. I'm going to get it into conversation before this week is out! Thanks :)

Daisy: Thank you. This ties in *so* well with my previous post about mysteries. I know the song very well, being named 'Kenneth' I get it quoted at me fairly regularly. But I never knew the background and the mystery which I read about on Wikipedia. Truly fascinating. thanks again.

It is a great song!

I never really thought about the title but after I read is was about flying during the war then suddenly it dawned on me that the soft 'beep' that crops up throughout the piece is actually the radar. I know it's not a weird title or anything but it just emphasises the fact that so often we regard titles as labels and they shouldn't be.

As for weird titles, I'll leave you with 'SWLABR' by Cream – it's off Disraeli Gears Or how about 'Fugazi' by Marillion from off Fugazi? Or 'Baba O'Reilly' by The Who from off Who's Next?

I need to stop – I'm getting carried away with this.

Don't stop on my account, Jim. I really like it when I occasionally manage to bend your mind towards my trivial kind of concerns :)

Plus! I get to correct you (on a minor thing) for the first time ever.

It was a brain freeze of course, I know you know this, but Samuel Barber's Adagio for Strings was used memorably in 'Platoon' while The Deer Hunter made John William's guitar version of 'Cavatina' quite famous. (Sad that I'm not looking thsi shizz up, eh?)

I don't know some of your other songs but Fugazi brings me straight to that excellent movie 'Donnie Brasco' where the word is used to great effect.

Always great to tap into your mind on these things... thanks!

You *weren't* wrong. :) you knew exactly what movie the music was from, you just typed the wrong name that's all.

And you generously gave me the opportunity to show of my nerdy movie brain. :)

Ohio Realtor: I'm replying to all my comments as they come in - like a big Noob - but they're such fun, I can't resist. :)

I remember this song quite well - you're a bit of an 80's fiend I guess. Also I used to sing at all the requiem masses when I was a lad so the title was well known to me back then: "Sanctus Dominus Deus Sabbaoth, Pleni sunt coeli et terra..." Ah dem were the days. :)

So that means I can say to Susan, without fear of reprisal, that "Three Dog Night" actually originates with Alaska and Eskimos? :) Still the same meaning: took three husky sled dogs to keep one warm. But I'm still willing to cook food for Susan if that helps. ;)

Ah, "Blue Moon". One of the first songs I learned to play on the piano at age 8. I had no idea until now [because you made me look] that it was a Rodgers and Hart tune.

Continue on with the lesson, professor. Especially the Purple Rain thing.

Supercalifragilisticexpialidocious, do I win ??

and I just watched over the holidays...

Doe a deer a female deer , ray a drop of golden sun.
Have no idea what that song is called though...do ra me fa so la te doooooooooooo???

Hey, how are you doing?

Music trivia is basically how I spend my days. Not sure if I know any fun explanatory facts, but while we're here I'll throw out a pop question I heard the other day anyway... How many Beatles albums contain only Lennon/McCartney compositions? And for extra credit, which ones?