Leaving the Lights On 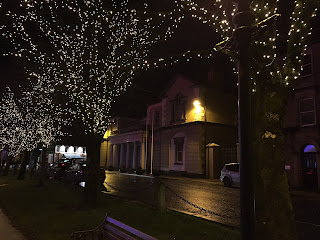 It’s raining this morning. It's Sunday morning and it’s raining cats and dogs. It’s raining hammers, raining nails. You choose. All I know is that it’s raining. Won't it ever stop?

Tomorrow is February. January will be gone. I’m not a great one for wishing months away. I suppose I don’t really believe that a turning over of a calendar page can make much of a difference from one day to the next. But I’m on the lookout for Spring and February sounds so much more like Spring than January does.

When I walk down the next street, there’s a bush of some sort that extends out onto the footpath. The buds on this bush are swollen and ready to burst open. Spring is well on its way or even already here. I can’t always tell.

I’ve had as easier time of it that many. I’ve managed to keep myself occupied, though I think of the things I might have got done and didn’t. Plus, I didn’t get sick. Touch wood etc. etc. So, yeah, people have had it way worse than I have. Almost everybody, I’d say.

But man, it’s not easy, is it? It’s not like a piano falling on your head from a first-floor window. It’s more like that same piano being lowered onto your head, millimetre by millimetre, over a period of many long months.

So, thanks for leaving the lights on. It helped… I guess.

The lights are a favourite aspect of Christmas time for me. All around the town green, we call it The Mall, the trees are lit up for the Christmas season. It’s a lovely sight. In recent years, a temporary ice rink in the centre of The Mall has diffused the effect somewhat for me but, this year, there was no ice rink, no fairground attractions. There was just The Mall and its lovely yellow light, shimmering in the branches.

There’s always a day in January, usually after the 6th, when you walk up through the town and find that the lights aren’t on anymore. A brief moment of sadness, time is passing, then onward. Next year is, after all, another year. But, this year, the lights never went off. January went on and on and on and on and it was tough enough. The lights stayed and stayed though, warming the town a little, brightening the darkness. It was a good thing.

But, strangely enough, it was only a good thing for me for a very little while. I guess I over-thought it, as I often do with things. For me, as it turned out, the lights worked best as a sort of a promise. Christmas is coming, Christmas is here. We will rest and eat and be together again. After the warm novelty of seeing the lights in mid-January wore off, what remained was a tangy aftertaste. The lights wanted to promise something, it seemed to me, but there was nothing to offer. Christmas was gone, the days were short and hardy. The lights came to symbolise a general malaise rather than a general good. Another false promise, another short road to nowhere in particular.

It’s probably just me. As I said, I overthink things sometimes.

And now, as I remain vigilant for the coming of the Spring, the lights seem further diffused and irrelevant to me. The evenings grow a little longer. The lights are now competing with the creeping daylight of the coming spring. They seem pale and weak and a little out of their correct place. They seem sad to me.

Perhaps it’s time to let the lights go, until December comes around again. They have served us well over the dark months and they will do it again soon in, hopefully, better times. But everything has its season and the season of the lights on the Mall is now past. Spring is well on the way and she can do much of the heavy lifting from here.

Thanks for leaving them on, though. For a time there, it was undoubtedly welcome and helpful and good.

But for now, onward.

I get the same feeling - the lights being left on for the first week felt warm but now they feel almost post-apocalyptic; remnants of an abandoned world just left. Next to the unemptied bins and the closed shops, the streets feel almost like the setting for a ghost story.

But Spring is coming, J, keep a weather eye out for it.

In our home we have a particular set of lights that we keep up. Just a string of coloured lights that dress the kitchen window. They get us through January after the Xmas decs come down.

And yes, by the time February arrives they get switched on less and less until eventually they remain dormant until next winter.

But they remain up. They keep a promise.

I lose track of time. Or, probably more correctly, have lost track of time. Ask me when most things happened and I couldn't tell you. I don’t remember the years my parents died or the years they were born come to think of it, I couldn't tell you the years I got married, any of them, and as far as anything in what most people would refer to as "recent memory" just forget it. In my head things happened a wee while ago, a while ago or a long while ago. So, a while ago Carrie and I had a home invasion. It was just before Christmas. That I can remember because the tree was up and I thought the guy might knock it over; he did bump into it at least once. Anyway after he was escorted from the premises and Christmas came and went we just left the tree in situ and it stayed there until we moved and, had we not been waiting on an electrician coming, Carrie would've had it back up within days of our arrival and probably never taken it down again. And I'm not sure I would've minded one bit. Of course having the tree up all year long you miss putting it up and the joy of seeing those lights go on for the first time but when you compare that to the pleasure of having those coloured lights on every night it's a small price to pay. Where we live now our living room looks out on the back of houses so unless you go out and wander round the neighbourhood you wouldn't know it was Christmas. That I do miss but not enough to have put us off moving