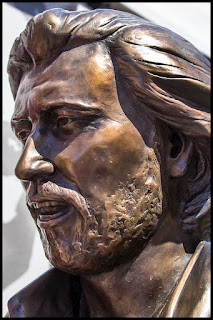 This old blog is not getting any easier to write.

I was thinking about that this week and I quickly came to the conclusion that it’s not that I’m losing interest or forgetting how to string a sentence together. It’s just that nothing much is happening. Life is necessarily smaller than it was. Interesting people are not being met; challenging conversations are not happening. Funny moments are not being witnessed. That kind of thing. There’s just not so much to be writing about.

The upside of this lack of potential material is that little things tend to hit harder.

On Friday night, we were flicking through the myriad of TV channels and finding nothing to make us stop. We landed on Sky Documentaries and the Bee Gees were there, singing some song.

It turned out that this was a new documentary on the career of the Bee Gees called ‘How Can You Mend a Broken Heart.’ “This will pass half an hour,” we thought, because it was clearly close to its final act. We watched it. Perhaps it was on account of what I mentioned at the start. Perhaps it was because the world has grown small and little things have grown big. Whatever it was, it hit hard in the end. Two days later, it'

The part of the film that I saw captured that feeling well. The guys were unapologetically geeky, endlessly ambitious, patently egotistical… I hesitate to even say it but, come on, slightly funny-looking. They didn’t come across as stars. They looked like I did; a bit ordinary. They often seemed shocked and dazed by what they had achieved but they snapped at anyone and anything that tried to take it away from them.

In 1977, our school class went on a tour to Enniskillen. On the way back, we stopped in Bundoran and I ducked into a record shop and bought the soundtrack album to Saturday Night Fever. I remember I hid it in my bag and didn’t show it to anyone. The guys were a bit uncool, even then at the height of their trajectory. In a music video, they stood in smoldering New York urban ruins in their disco outfits and it was mortifying to watch and still is. The falsetto vocals just seemed so unworldly and so detached from the Punk Rock stuff that was obsessing the cool kids.

But the music. The rhythm. It was hard to ignore.

I hate the film Saturday Night Fever. I hated it when I saw it in ’77 and I hate it still. It is horrible and negative and misogynistic and not even the music can redeem it. But the music on its own… that was something.

The title of this piece says ‘Two Bee Gees Songs’ and neither of them are from Saturday Night Fever so I’d best move on or else we’ll be here all day.

The first represented my earliest memories of the Bee Gees. It was back in 1972. Did I tell you I was old? And, straight off, I’m telling a lie in two different ways. Firstly, I had heard of the Bee Gees in 1971 (I was eight years old then, just so you know) because there was a poster in my local cinema for a film called SWALK and it proudly boasted that the music was by the Bee Gees. I remember thinking, “That’s a funny name for a group,” and moving on. I never saw the film though I know quite a bit about it.

But back to 1972. At that point, I became enamoured of a song that was in the charts. Well, as much as a nine-year-old can become enamoured of anything. It was called “Run to Me”. My brother had a very early cassette player/recorder. Remember the one with a single control that you pushed back for rewind and forward for fast-forward and up to play? No? Never mind. I borrowed it and recorded the song off the radio. I really liked it. Interestingly enough, I never knew it was the Bee Gees or if I did, I have forgotten that I did. It was many years later that I heard it, and someone said who it was, and it was a Eureka moment for me. The song still draws me. If I think about the lyrics too hard, I may have to acknowledge that they might be a wee bit dodgy. But the song still tugs at a string in my gut, as the second song does.

That second song has a rather strange effect on me. It’s ‘Too Much Heaven’. You know the one, classic ‘slow set’ stuff. “Nobody gets too much heaven no more…”. When I hear it, I break out in nostalgia and warmth. “Nothing strange about that”, you might say, “we all get that”. But here’s the strange part; I have no memory of what this nostalgia is for. All I know is that the song evokes some sweet moment for me, but I cannot for the life of me remember what that sweet moment might be. In trying to dissect this problem I have guessed that it is possible that it is the song that was playing when I first drummed up the courage to ask someone for a slow set dance at a disco. I don’t know if this is true or not, but I remember an awkward turn around the floor and the overpowering smell of shampoo. I now like to think that this song was a part of that equation too. It was something like that, I reckon. I’m just not sure what. I wrote a slow dance into one of my plays and, although the song itself is not specified in the script (I wouldn’t have the rights to do that) there have been several productions of the play where I have nudged that song into being played for the climactic slow set scene. Standing at the back of the theatre, watching my writing being played out, on the basis of a sweet song and a half-remembered moment, has been one of the high points of my writing life.

So that’s me and the Bee Gees. A rather awkward, geeky affair, sitting ever so slightly uncomfortably alongside all of the really cool things I like. But, alongside that awkwardness, always a respect, a huge respect.

What a creative force in music.

And then, right at the end of the film, there was Barry. Alone. His brothers all gone before him though he is the eldest. Old now, with an air of quiet bewilderment that he should be the one left behind. And to close the film, that sentiment. Barry is being interviewed. There was obviously something about his lost brothers than he had wanted to say, but he hadn't quite managed it. He tried once more.

“What I wanted to say earlier is I'd rather have them back here and no hits at all.”

And that, right there, was one little thing that hit big.

I watched that documentary the other day - it was SO interesting!

I need to go back and see the rest of it.

I don't know much about the Bee Gees. I didn't know there was just one brother left, but I did know at least two of them were brothers. You made a pretty sad post at the end. Not so much his quote but your set up of it.

It's good for people to have things and care about things which are not cool. I call it, having a personality of your own. Too many blind followers of the popular and the cool. They are the most uninteresting people of all people. I, am often contrary. It annoyed my Dad quite often. It just seems that any popular opinion must be taken apart with a suspicious eye and I can usually find some reason not to agree with it. I will never be part of the cool flock, but I'd rather choose my own path anyway.

Carry on the Bee Gee way!

Hi Rachel, I only saw the back end of it so I've got hold of the rest of it today and will watch it shortly.

Hi Laura, I should be braver in just liking what I like and not qualifying it so much. I try to do that but don't always succeed. Bravo, you, for going your own way.

I was never a huge fan of the Bee Gees, pre- or post-falsetto. In fact as soon as I read the title of your post the first thing that sprang to mind was Kenny Everett’s Do It Yourself Bee Gee Kit. I don’t know ‘Run to Me’ or ‘Too Much Heaven’ and although I was happy enough to watch the whole of Kenny Everett’s skit I couldn’t drag myself to locate videos of the songs. Now had we been talking ‘Pretty Vacant’ and ‘Holidays in the Sun’ it would’ve been different. I wasn’t one of the cool kids but I did appreciate how necessary punk was. The singles charts were awful after glam rock started to lose its shine. I can remember the songs from that time well enough. Groups like ABBA and the Bee Gees, Boney M and Gloria Gaynor definitely form part of the soundtrack of my life—I can clearly remember hammering (and I do mean hammering) out Donna Summer’s ‘I Feel Love’ on a pair of baby grand pianos with my mate Tom (yes, his parents owned two baby grands)—but I’m not sure many or even any Disco standards would make the final cut if you asked me to list my favourite songs from the seventies which I could probably get down to about fifty given time; hell, Bowie alone demands ten slots. If I was given a hundred tracks there might be room for ‘Oops Upside Your Head’ by the Gap Band although I’m not sure whether that’s more funk than disco—I do get my musical genres mixed up on occasion—and possibly ‘That's the Way (I Like It)’ by KC and the Sunshine Band. I have watched Saturday Night Fever but all I remember is the famous white suit. That’ll Be the Day and Stardust impressed me more but (sadly) not Slade in Flame. Actually, now I think about it, Slade probably deserve about ten slots too so we’d better make it my Top Two Hundred.

Ken, I live in Woody Point Australia. Not far from one of the Bee Gee homes (at Margate).
Around the end of the 1950s I and friends would travel from my home in Caboolture, Queensland to see the Bee Gees perform at Filmers Palace Hotel Wood Point. 25 mile drive there and back.
They were so good.