Michael and Me by Eddie Armstrong

My eldest brother, Michael, sadly passed away this week.

I was honoured to give a eulogy for him at his funeral mass.

But I thought my elder brother, Eddie, grasped hold of an elusive thing in his own eulogy at our final (for now) farewell.

I asked him if I could record it here and he kindly agreed. 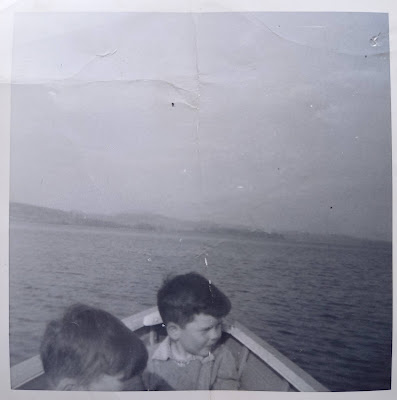 Michael (obscured) with Eddie (centre) on Lough Gill with Dad, in his Boat

This short story, which I call ‘Michael and Me’, is me explaining to you what I mean when I say to Michael, ‘I’ll see you on White Shore’. If I fall apart in the telling, bear with me and we’ll make it through it together.

The last verse of the poem by Máirtín Ó Direáin ‘An tEarrach Thiar’ /’The Western Spring’:

As a currach full of fish

Comes towards the shore

On a calm golden sea

In the Western Spring.

Michael and me spent many of our years fishing. On the river, in short trousers, we’d be up at ‘the Slip’, that was where the boats went into the river, up opposite the Jail road. Fishing for eels, we’d dig up the worms and put them in a jam jar full of clay, but Michael wouldn’t put the worms on the hook, that was my job.

On Lough Gill. We’d be up early in the morning getting ready to ‘head up the lake’, Mam would be making the sandwiches while we’d be grabbing the breakfast and ‘getting the boats ready.

“I’ll bring up the oars and the engine while you bail out the boat”.

‘Up’ was up to the ‘Steps’ - the gaps in the wall where the boats sat in the river.

As the years went on, we got our own boats and engines, Michael had a white 8 HP Honda 4-stroke engine that didn’t burn oil, unlike my 1½ HP 2-stroke Seagull that did. I loved the smell it left in its wake, Michael was already more environmentally conscious, even way back when I didn’t know what that meant.

‘Where’ll I meet ye for tea?’ was a common conversation.

‘I’ll see ya on White Shore,’ was all that was needed. White Shore is at the top of the lake, a long way up. That was enough.

We’d head when we were ready, up the river, through the Narrows and out onto the lake. I might head up the back of Beezie’s island, around by Goat island into Benowna bay, then cut across the Sandy ridge at Church island, out past the Cormorant rocks and up Corwillick. Michael might head up the Shellhouse, hit out to Perr Rock from the Castle Point and up through the Rookeries.

If I was in first, I’d be gathering the sticks. He’d come in and start lighting the fire. Smokey tea from the black kettle, boiled on the fire, and Mam’s sandwiches. Hanging out with your big brother, doing what we loved. That was the life.

When we’d be pushing out the boats after the tea, we’d part with, ‘I’ll see you when we get down’. ‘Down’ was back home off the lake.

Back at the steps in the evening it’d be, ‘I’ll bring down the engines and oars while you tie up the boats.’

I have two oak trees in my back garden that commemorate Mam and Dad’s passing. Mam’s one is over 15ft tall and Dad’s is about 10ft. Michael grew them from acorns.

I have a chestnut tree in my front garden. The conversation went, ‘Ah sure take it, or it’ll die. It’s a native species, not like those two red oaks you have at your gates’. He could talk ya into anything. So there’s a chestnut tree in my front garden. It’s been struggling since it went in but I suspect it’ll thrive from now on. Now, suddenly, it’s my commemoration for him.

Cohen’s ‘Alexandra Leaving’ depicts the Lord of Love hoisting his friend up on his shoulders, to carry her home. I liken his depiction to what’s happening here today:

Michael hoisted on his shoulders

They slip between the sentries of the heart

Michael and me did the ‘Plans of the House’ for Carrie and me. Who else? We knew what we wanted, he helped us build our dream home and helped make our dreams come true.

Dylan describes Michael and me eloquently:

I could make you happy, make your dreams come true

Nothing that I wouldn't do

Go to the ends of the Earth for you

To make you feel my love

The last song ‘Into the West’, from the closing scene of the Lord of the Rings, covers the last thing I’ll say today for Michael and me. Annie Lennox will do it justice, I’ll leave you with a few of the more poignant lines:

Your sweet and weary head

You have come to journey's end

And dream of the ones who came before

From across the distant shore

The ships have come to carry you home

We have come now to the end

You and I will meet again

A fine piece commerating a fine man. I would usually meet Michael 2 or 3 times a week
covid & cocooning for me ended that sadly that. The last time we chatted was in Abbey St of a Saturday morning. I was parked but Michael didnt see me 1st only the spaniel sat on my lap hanging out the car window, after checking the dog had a driving licence.. we chatted for about 10 mins local 'news' . It'ssuch a shock he's left us,but this piece will always keep his memory fresh. I know it's your birthday today Ken,hope you have the best one possible given the circumstances Stay Safe GH

Thank you, G. I'm sure those meetings were lovely things for you both. Mind yourself, mate.

I'm sorry for your loss, Ken. Your brother's words are so evocative I can feel the sea air as if I was on that boat with them. This is how we live on after death, through the thoughts and words of our loved ones.