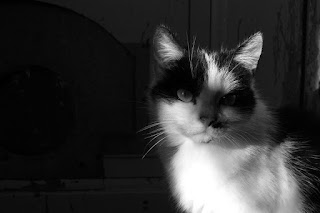 Friday Evening, quite late. The sun has gone down but there’s still some brightness in the deep blue sky. The earlier thunderstorm has taken some of the heat out of the outside air though the house is still a little too hot.

So, I take a walk up the street to the corner garden. The cat is there, sitting on a garden wall. There are two other cats over on the far side of the street, and they are all eying each other up in Mexican standoff fashion.

As I come close to the cat, she makes to jump down from the wall and away into the depths of the garden within.

The cat stops, mid-pounce, and stares back at me.

The cat settles back on top of the wall and watches me. Her eyes seem to say, “Okay, just don’t come too close, that’s all.”

I lean on the wall, a little way down. I know better than to try to move nearer to her, even after all we’ve been through. The other two cats watch us warily from across the way.

Our eyes meet, the cat and me.

“So, young lady,” I say, “any idea what time we might see you home tonight?”

After three months or more, Magda the cat is back home again. The wild cat from the neighbourhood who had kittens in my shed, went missing, had her kittens removed, came back, was reunited with the kittens in a safe place, raised them in that safe place, was neutered, healed, and recovered (It sounds a bit like a Creed, doesn’t it?) and is now back in the neighbourhood, where I have promised to keep on eye on her and feed her whenever she needs it.

Last weekend, I went to pick her up from Magda (the Person), who has been looking after her and her kittens, who are now weaned and off doing their own thing. I’ve named the cat after Magda, just to confuse everybody, though I don’t think the name will stick. Wild things are wild things.

She may remain ‘The Cat’.

When I arrived at her house to collect her, Magda (the cat) was not in her transport container and Magda (the person) was bleeding profusely from her finger and thumb. After many months of enjoying her hospitality, the cat had no compunction about inflicting a little damage when she was encouraged to go in the carrier. We decided to leave the move home for another day. Put some food in the carrier and let her go in and get it of her own accord. That worked.

Back home, a day later, I put Magda (the cat) (I’ll stop doing that now) into a large purpose-made cage in the same shed where she had her kittens. The idea was to give her a little time to reacclimatise and refamiliarise herself with the sights and smells of her home place before releasing her. The recommendation was to do a few days of this, but it was very warm and, even with the shed door open and the cat looking out onto her domain, it didn’t seem fair. So, a week ago today, I put a nice bowl of food outside the cage door, opened it up, stepped back and hoped for the best. Magda sidled out after a few minutes and nonchalantly devoured the food. Then she poked around the back garden for a bit and meowed copiously. I call it ‘giving out’.

After a time, the cat headed out toward the front of the house, looked left and right up the street, then vanished up through the line of front gardens. Was that it? Would we ever see her again? We didn’t quite know.

Thirty long minutes later, the cat was back. She found a shady place under a bush and settled down. Later in the afternoon, she sat under Patricia’s chair rather proprietorially while she sunned herself in the garden. It was all rather lovely to see.

A week later and it remains lovely… but different. The nice lady up the road, who looked out for the cat long before we did, is delighted to see her back in the neighbourhood. The cat wasted no time in calling around to say ‘hello’ to her. That first thirty-minute excursion turned out to be straight to her house.

It’s not exactly as I imagined it might be but then what ever is? I had set up a corner of the shed in a rather nice way, with a chair with a cushion on it and a nice crate will pillows in it, but the cat doesn’t want to know about it. I guess the shed holds too many awkward memories for her to want to be in it anymore.

Similarly, now that she has found her feet, she is no longer a constant feature in our garden. She seems to prefer the houses at the other end of the street. I guess she gets well-fed there and maybe she scores a little attention too. I must get used to the fact that I might not see her for 48 hours on end and then she will turn up, sitting on the window cill or on the garden chair. I offer her a meal and she gives it only cursory attention, leaving two thirds of it uneaten. She is being catered-for elsewhere and that is fine with me. If the supply ever runs out, I’ll be here.

It’s getting darker now so I’d probably best head back home. Patricia will wonder where I’ve wandered off to and my neighbour will be wondering why I’m loitering under the lamplight outside his garden wall, evidently parlaying with one of the stray cats.

But, as I suggested in the very post I wrote about Magda and me, the cat doesn’t care and will never care. We've come full circle, the cat and me. Polite strangers again, passing in the night.

That’s cool. That’s how it should be. I’ll hit for bed, though it’ll probably be too warm to sleep.

The cat is fine.

I think I did okay.

FOOTNOTE - This probably ends this short series of posts about the cat and me but who knows? If you'd like to read the four posts in order, you can click to the first one here and follow on from there.

Our relationship with “Moggie” has also progressed. We’ve now started buying him treats (we still think the cat’s a tom) and he’s not adverse to wandering into our kitchen after he’s had a handful to see if we’ll buckle and hand over some more. I even caught him halfway up the stairs one day. I went to put stuff in the bin and he was nowhere to be seen. The next thing he shot by me and back outside so he’s getting bold. He’ll tolerate a wee pet but nothing protracted so I don’t push it. He lives with “Ant” but “Mrs Dec” also feeds him and now us and Christ knows who else. I don’t mind. Having a cat I can enjoy for a few minutes a day suits me just fine. I mean it’s not like you can pet the Larrys. The odd thing about the cat is how much younger he is than he appeared at first. I thought he was old and grouchy but far from it.