Meanwhile, Down the Garden 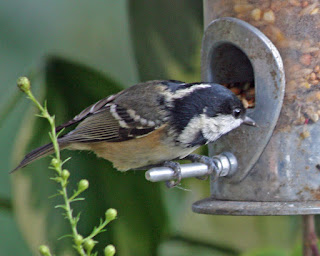 My wife knows what kind of birthday presents I like.

I wouldn’t thank you for silver or gold (okay, I actually would but let’s run with the idea for the purposes of this paragraph). Neither would I thank you for wads of cash money (ditto, but stick with it). But I get a big kick out of watching the wild birds come down in the back garden and feed on the small amount of seeds I scatter on the paving, or having a bath in the terracotta flowerpot base and the old iron pot that I keep full of water. What can I tell you? I just enjoy that kind of stuff.

So, Patricia bought me a simple little belated birthday present, and I love it a lot and I am getting a big kick out of it.

It’s a plastic bird feeder and a big bag of wild bird seeds.

I filled the feeder up with seeds and hung it on a swaying branch of the Leylandii evergreen down below the redundant trampoline. Would any of the birds spot it? Would they come and have a tentative nibble on the treats within? I waited to see…

Friends, I have started a war.

The House Sparrows have been a regular feature for some time in my garden. Near the start of the whole lockdown saga, I started putting out a little seed on the ground and it was mostly them who showed up. They were sweet and entertaining, feeding the littler ones, scattering at every twitch in a bush but never going too far, always coming back again for more.

So, the House Sparrows found the feeder fairly quickly. But they’re a difference bunch, off the ground. There’s only two little perches on the feeder so it’s a strict ‘wait-your-turn’ system. Except, of course, it’s not. What it is, is like a pub near closing time where all the drink is being given out for free. You just have to get to the counter. It’s a pitched battle between the house sparrows for the perches and it’s no holds barred. The two that are on the perches chuck seed all over the place, in their urgency to feed. The grass beneath the new feeder will probably become some patch of exotic growth on account of the pile of seeds that have already dropped there. Meanwhile the waiting hoard lurk on adjoining branches and periodically dive bomb the ones on the perch. Fluttering and pecking like wild things (yes, I know). You have to be a tough House Sparrow to keep your spot on the perch for very long. If you don’t watch out, you’ll get fluttered off.

Then there’s the matter of seed consumption. As I said, Patricia bought me this fairly big bag of seed. I figured this would last me for a couple of years, at least. A little refill ever alternate fortnight and the feeder will be right.

That’s not how it is. You knew this but I didn’t. The full feeder gets decimated in a matter of an hour or two. It’s mayhem down there at the bottom of the garden.

What on Earth have we done?

Will we soon have a hoard of fat sparrows lying around exhausted on our patio? Will dietary regimes have to be introduced? Where will it all end?

To be honest, I’m hamming it up a bit, as I usually do. It has its mad moments, sure, but a lot of the time it’s fairly laid back. A well-timed house sparrow, if she’s lucky, can have the place to herself for a while. And, when it’s really quiet, and the mob of sparrows have gone off to blitz some other birdbox, an unusual little visitor or two can drop by.

We don’t get many varieties of bird. Not yet anyway. There’s been some finches in the garden, but they haven’t tried the new taverna yet. We have a single Coal Tit who drops in regularly, picks up a little seed and retires to another branch to consume it before returning for another. Of course, I had no idea it was a Coal Tit. I looked it up on the Internet. It’s all good fun, isn’t it?

The cat seems to be having fun with it too, on her occasional returns to the garden to lick the gravy off the cat food I give her. She stalks around the vicinity of the feeder, throwing all kinds of Kung Fu/Matrix shapes and being utterly ineffectual. The birds mock her from the bush and wait until she fucks off again. One day, she’ll have a little sweet revenge, one feels.

I’m off out now to fill up the feeder. I try to do it while it’s still on the branch because I reckon if I take it off and on too many times, the branch will get weak, and the feeder will slide off. It’s a bit of a stretch and I may not present the most elegant vista as I do it but, to hell with that, it’s my garden and you don’t have to look.

The feeder sways on the branch as all the little birds come and go from it. It’s like a little ship at sea with its mutinous crew bickering and chucking their rations about.

It’s the very best present ever.

This is my wife's territory. I'm simply the enabler. I have nothing against birds or even feeding birds but I can't say it's a passion. I take an interest in the comings and the goings in case I catch something I know my wife would've loved to have seen and I worry about the Darrells out on their own in the big bad world now they can fly but I don't lose sleep over them. I want our wee garden to be a success both flora- and fauna-wise. I'm just glad the gulls are so territorial and we only have one family to tend to. I would like to see more small birds. The feeder goes down regularly so they're coming but they're so damn fast. The pigeons have given up trying to eat straight from the feeder but they've learned if they hang around down below the scraps can prove quite the feast. We have one wood pigeon (Woody, what else?) who's pretty much made our garden home and I'm a bit fond of him; he has character.