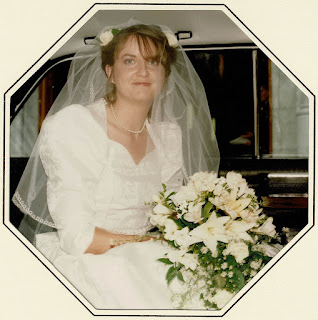 I was the very first there. In my dress suit and my natty grey tie. Standing outside the Claddagh Church in Galway with a loaf of sliced white bread under my arm. The bread was there for a reason. But I must confess I also enjoyed the incongruity of it. Some things don’t change, even thirty years later.

Yes, that’s right. This week, my lovely wife Patricia and I will celebrate our 30-year wedding anniversary. And it’s been thirty wonderful years, which has taken us right around the world and back, living in London for the early years, and then eventually returning back home to Ireland.

And I remember our wedding day just like it was yesterday. That means I remember bits of it and am not fully sure about the detail of any single part of it... just like yesterday.

But here are some bits I think I remember about that day. They’re probably all wrong. Trish will straighten me out later on.

When Margaret, my sister, arrived I passed the loaf of bread to her.

And she did, and, when the time came, she did it. Fair play to her.

I remember random things about the wedding ceremony itself. I remember Patricia being walked up the aisle by her brother Kieran and how beautiful she looked. I remember the priest saying, ‘and now the ceremony of the candles and me saying, “what the fuck is the ceremony of the candles?” I remember the reading from the Book of Tobit that I picked out because I’d read it in ‘A Prayer for Owen Meany’ and that it said, “Grant that she and I may find mercy and that we may grow old together." We’re working on that, so far so good.

After we had got married and had walked out of the church to smiles and kind applause, Patricia got talking to some folk, so I went around the side of the church to reflect on how married life was treating me so far. I hadn’t realised that the whole ‘Patricia talking to someone’ was actually the formality of waiting in the church porch to be congratulated by all the guests as they streamed out. Trish has to put up with quite a few ‘so he’s left you already’ comments before someone came and got me. Nice one, Ken.

The O’Reilly Family Photograph outside of the church stays with me. Patricia’s family are the O’Reilly’s, and they are lovely and hard to coral into one place, in equal measure. This photograph, outside the church, took an absolute age. Any time 90% of the cohort was gathered, someone would wander off or just simply vanish. Eventually they all coincided in one spot for a millisecond and the photographer clicked. Job done.

While that was going on, Margaret had gone with her loaf of bread and done her thing. As I said, fair play to her. If you ever get to visit The Claddagh in Galway City, then do. It’s a beautiful place by the water with fishing boats and picturesque little houses across the way and a grassy quay… and swans. There are a lot of swans. And that’s why the loaf of bread was there. I thought it would make a nice photo if loads of the swans were enticed close to shore with some bread and we got our picture taken with them. The bread worked and the swans came. The photo itself proved to be a small disappointment. It’s over-exposed so that the swans are puffy white blurs rather than anything meaningful. A shame, really. But there was a compensation. One of my best memories of the day was hurrying back up along the quay to our waiting families and friends, bride and groom, happy as happy can be. That, on its own, was worth the loaf of bread.

There was a wee woman outside the gates of the church, on the street. We didn’t know her. She came up to Patricia and pressed something into her hand. It turned out to be a small set of rosary beads. “You are a beautiful bride,” she said, “a beautiful bride.” Then she slipped away. It was a very Galway thing to happen.

We went back to the church for a look a few times after, over the years. Again, if you’re in Galway, check it out. It’s a marvellous location. I went back once by myself in recent years. I had time to kill because Patricia was having a very major surgery in the hospital up the road. She had been brought in before eight in the morning, before I could get there, and she wouldn’t come out again until close to midnight. It was that kind of a big deal. I had the day to get through and I didn’t want any company with it. I ducked into the Claddagh Church around lunchtime. There was a ragtag choir of young people practicing something. I wandered around the aisles and lit a candle as we sometimes do. This was where we had tied the knot and the knot was still strong. That day worked out okay, in the end, and on we went. Maybe the Claddagh candle helped, maybe it didn’t. It helped me.

I feel a sense of considerable pride at hitting the thirty-year anniversary. For a fuckwit like me to hold onto a lovely girl for this long is no mean feat. I feel lucky too. We have been allowed to have something that not everybody gets. Time.

So Happy Anniversary, when it comes, Patricia. She’ll read this later and probably say, “Why didn’t you put up a photo of the two of us?” I’ll say, “Because I look like a feckin’ greyhound, haven’t you seen those photos recently?”

Besides, it’s a lovely picture. Isn’t it?

Happy 30th Anniversary Ken and Patricia. We are 34 married today,22nd, and will celebrate it doing more of the ordinary things that are just more of the stepping stones that have kept us going together through the years. And ....I agree with you about the privilege it is to get the 'time'.😊😊

I don't comment much these days, despite reading. This is so lovely, Ken. Such a joyous celebration. No matter the white blobs for swans.

Congrats to you both.

Elisabeth - I appreciate you breaking your radio-silence for us. The swans say hi. :) x

Thank you, Brid. It was lovely to see you on The Mall. Maybe you and me and Iarla could meet up some day and have a good 'give out'. x

I love this story, Ken! Thanks so much for sharing it. Happy anniversary! Well done on 30. ☺️

I've not been very active in my blog hopping nowadays because of poor eyesight. Great story. Belated Happy Anniversary, Ken. May you have more blessed years to come. Take care.

Carrie and I have been married over thirty years... just not to each other. I think that’s why we settled into old married folk mode so quickly. There was a brief settling in period but it was more to do with the culture and, frankly, there’re still things about living in Scotland my wife struggles with on top of her complete inability to pronounce “Edinburgh” correctly. We feel like we’ve been married forever and our other lives were fictional. I won’t bore you with details of our wedding day although it had its moments and I do remember it fondly. To my mind too much emphasis is placed on big weddings especially these days when so many couples find themselves cohabiting beforehand. Thirty years is not to be sniffed at though and I’m pleased for you. It should all be plain sailing from here on.