Company in the Wall 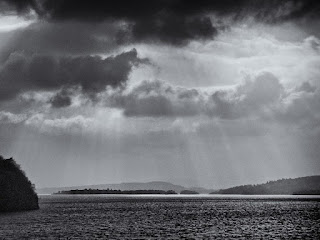 As I wrote in a recent post, after my brother Michael died recently he left a wish that he be put in the Wall in Sligo Cemetery. He wasn’t keen on the idea of leaving somebody with a grave-maintenance job, so he favoured the Wall. The Wall is something fairly new to us although it is a thing that is seen the world over. We certainly see them a lot in the movies. It’s just a wall of little compartments where your ashes go after you are cremated. A little plate is put on front of your space and that’s you sorted. It’s a regular thing but a relatively novel one in my hometown of Sligo where you generally go in the soil and push up some daisies.

So, we put Michael’s ashes in the Wall a few Saturdays ago. It was a nice low key gathering of friends and family. The sun shone, which was nice. Margaret, my sister, gave a lovely eulogy for her elder brother, who may not have been the world’s greatest chatterbox when he was younger. “He left me with two great pearls of wisdom,” Margaret told us, “’Where’s Mam?’ and ‘Shut the door’.” Having said that, she did go on to confirm that in his latter decades, he was as cheery and communicative a man as you could ever hope to meet. After that Eamon, Michael’s little nephew, read his little extract from Saint-Exupery, “And so it will be as if all the stars were laughing, when you look at the sky at night…” and Michael would have liked that quite well, I reckon.

Then the little wooden casket, with his ashes in, went in the Wall and we stepped away for a moment while the cemetery men fixed the plate in place.

It was only when we stepped back again that I noticed who was there in the wall beside Michael. Martin, Alan’s dad, right there on his left. Alan is one of a small handful of my very best friends. We go way back to when we were young teens and, as the saying goes, we’ve all passed a lot of water together. Alan is a great man, one of the strongest, most deeply moral, people I know, brilliant musician, motorbiker, dad, husband and (he’d slap me gently for this) outrageously handsome. His dad was always there when we were teens. A cool guy, a man’s man, someone you’d be happy to meet and maybe also be a little in awe of.

And I guess it’s indicative that business is a little slow at the Sligo Cemetery Wall because it’s been a few years now since Martin passed away. I remember travelling up to Sligo and meeting some people who I hadn’t seen in a long time. It’s been a while, yet there they are, Michael and Martin, side by side.

This made me happy. Well, as happy as one can be when the ashes of your beloved brother are being laid to rest. Maybe not happy but more content, definitely content. There was Martin, my good friend’s dad, and Michael. I was glad they were beside each other.

This ‘Ashes in the Wall’ day was the hardest day of all for me. All of it was hard, make no mistake, but that part seemed even tougher than the rest. That may seem strange, weren’t other parts obviously harder? I think it was because this was a little social gathering in the sun, the usual suspects, all together and, critically, Michael wasn’t there. He wasn’t over there chatting to Jim, or hanging back a bit with Liz, or having the crack with Harry up the way a bit. I get all the positive thoughts about how he was there in our hearts and memories but, dress it up however you like, he wasn’t there. And that was hard. And Michael’s place in the wall being there right next door to Martin’s somehow made it a little easier.

I should just leave that alone. It’s enough that it’s true. But it in my nature to ask myself why. Why is it that the presence of my best friend’s dad’s ashes next to my brother’s ashes gave me some kind of solace?

I thought about it and it isn’t some childish notion that they will be company for each other there in that lovely location. Chatting away or some such thought. It’s not anything like that.

What it is, I think, is something that relates much more to the living than to those who have gone.

When I go to visit the Wall, in the future, I will see Martin’s name there too and I will remember him and the fun times we had in his home as teenagers, as well as what a wonderful cool guy he was. A golfer, a dad, a husband, the best man in the world to decorate a cake. All these things will be there at the wall for me, along with of the things that are Michael’s and mine too. And, maybe, when Martin’s family come by, they will see Michael’s name there too and they will recall, perhaps subconsciously, some of the great things about him and his life and what a good man he was.

Hey Ken, your post has brought great comfort to me, the feeling is very mutual regarding all your kind words toward dad. I believe Michael and dad were kindred spirits, both kind, good natured and both gentlemen. Thank you for taking the time to write this beautiful post. I hope you don't mind if I share this post with all on my side of the fence, I know mum will be very touched by your kindness. Hope to see you soon. Alan

Thanks very much, Alan. My best to all, particularly your Mum. Remind her I was the one she didn't deliver. :)

Emily, if I could figure out how to do a little return heart, you know I would. :) x

We clearly come from very different backgrounds when it comes to funeral practices. My parents never discussed their funeral arrangements; it’s not that it wasn't done, it was simply of no interest to them. They were both cremated and I wrote to the crematorium and asked them to dispose of the ashes as they deemed appropriate. So there’re no graves or holes in walls or trees to visit. I’ve never “visited” a grave in my life although I’ve wandered round a few graveyards. Carrie found the one in Edinburgh particularly interesting as there were headstones older than America. I don’t get graveyards. I mean I get why they came into existence, a place to bury corpses, but I don't get the whole visiting graves any more than I get going to church to talk to God. My parents were the least sentimental people you could meet. I guess much of that rubbed off on their kids because we were all in agreement. None of this is a criticism of how others deal with loss. Each to his own.