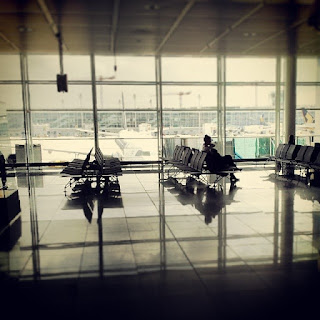 Back in 2017, I did a post about my younger son heading off on his school trip to Barcelona. The quiet joy and the dull ache of it all. You can have a look at it here if you’re bothered. This week, four and a half years later, and he’s off on a plane again. This time, though, he’s not coming back on Saturday night.

It’s all good. He turned twenty-one just after he left and he’s a seasoned university-goer who is well-used to living away from home and looking out for himself. He’s been looking forward to going and will be back in this country come Christmas. So, it’s all good.

Neither of us had been to an airport for a couple of years. Where have all these cars come from? We have to go up and up and up through the multi storey car park to even get a smell of a parking space.

The automatic bag check-in machine nearly defeats us at the first hurdle. No matter what touch pads we touch or how we present the damn case, the device will not co-operate. All around us, people are weighing their bags, attaching their sticky labels, and moving on while we remain confounded. It is almost enough to make you say, ‘sod it, let’s just bugger back home and try again next year when it’ll all be easier.’ But no. It turns out we have chosen a machine where someone has abandoned their check-in in mid-process. A quick shift to another machine and everything is fine. We are as good at it as everyone else is.

A brief discussion about going through security, which has always confounded both of us a little. ‘Best take the Docs off, stick ‘em in a tray. The eyelets might set some bloody thing off.’

Then it’s the departure gate, up the long escalator that seems to get you halfway up into the sky already. That’s as far as I can go, Buster. A brief tight hug. Weave your way through the simple maze of queueing-barriers. Round the corner past passport control. A fleeting wave and gone.

I find a quiet spot. He’s never flown on his own before. There’s security, find the gate, fly, land, find the baggage, get the transfer, find the place, find the room, get settled… ‘Know what, though? It’ll be fine. The Dude is calm and resourceful. Everything is doable, nothing is all that hard.

The occasional text throughout the day confirms all this. Everything gets done. Any glitch is waltzed through. I’m an old fool to ever consider worrying. But you do, don’t you? It’s hard not to.

It reminds me of something I’ve forgotten or at least of something I know but which isn’t as much to the forefront of my mind as it used to be. It’s just this. You have to do hard things to do great things. The easiest route to everything is not always the best. You have to occasionally pull up a stake, shake your leaves a bit, stretch out to the sun.

I’m only writing this for all the parents and young adults who are feeling that university separation tug in this current week. I don’t think you are alone, and I don’t think you should feel that you are. Everybody feels the tug, I reckon, it’s only natural. Plus, as with most everything, our Pandemic has made it all that little bit harder. We’ve all been comfied-up together for a long time and, even if it hasn’t always been totally idealistic for everybody, it’s still something we’ve got used to having. It makes the tug that little bit jerkier.

So be easy on yourselves, parents and children of the newly separated generation. If I know anything, it will get easier quite quickly, even if it never quite gets A-Okay.

Our practically grown-up kids are off on something like a slightly qualified Star Trek mission. Boldly going where it sometimes feels like nobody has ever gone before.

And they'll be fine.

It’s international daughters’ day today apparently. My wife posted photos of her daughter but, as always, I did nothing. I’ve always taken pains to respect my daughter’s privacy. I’ve never even mentioned her first name online and that’s not going to change. But what I am going to say is how proud I am of her. She didn’t have the easiest of childhoods—parents have so much to answer for, even well-meaning ones—but she rose above that, showed mettle and became her own (quite successful) woman. Apart from a very brief visit to sign some papers when we bought this house—which she filled in in the garden, well out of reach and masked—I haven't seen her since Christmas 2019 which has been hard but I don't worry about her. She turned forty-one this year. Forty-one! I remember when she first moved out and she’d turn up three times a week and then weekly, monthly, quarterly... I’ve always hated those TV shows where the parents march into their kids’ lives daily. Frankly I was jealous of them. In this modern world we end up living so far apart and we all have such busy lives. I’ve mixed feelings about it. I like my privacy too but I never stop missing her. She’ll be here at Christmas by which time I expect Carrie and I will’ve had our third injection, I’ll hug her till someone makes me stop because she’s turning blue, we’ll do what we always do, talk until there’s nothing left to say and then there’ll be that moment when we know it’s time for her to go. The “tug” never gets easier, Ken, familiar, maybe, but never easy,

Touched a lot of heartstrings Ken , , Leaving nest always tough, then grandchildren doing it ( Sophie at Oxford ) Chemistry working on vaccines. Best of luck to youngest , confident he will enjoy and make Dad proud . Hope all keeping well

Paul Thanks for that and, wow, Sophie at Oxford. Pretty... pretty good. :)