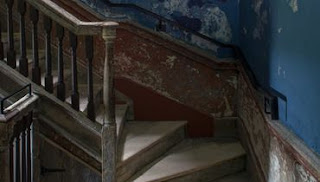 In 1981, when it was time to go back to college for the second year, I once again had nowhere to live. Maggie, my lovely landlady of that first year, had died over the Summer and her house now stood empty and awaiting probate. I went back to the B&B I had briefly stayed in at the start of my first year and scoured the evening paper every day for a lead on a room… any room, really.

In the spirit of ‘Any old port in a storm’, I ended up in one of those old Georgian houses on Lower Sherrard Street. They are prettier now than they were then. It was a rather peculiar set-up. The run-down house was populated entirely with men who worked the building sites of Dublin as labourers. There might have been 12 or 15 of them at any time and the turnover of people was often fast. Every Monday to Thursday, two ladies came into the basement kitchen and prepared an evening dinner for the residents. The weekends were a free-for-all, taken up primarily with drinking and sleeping.

At just turned eighteen, I was far-and-away the youngest resident of the Lower Sherrard Street establishment, and, in retrospect, I really shouldn’t have been there at all. I was a skinny little dude in among all these giant bull-workers of men. Still, I had my little room at the very top of the house which had a bed and… well… it had a bed. So what if I had to pass through another man’s bedroom to get to mine and so what if that man was a huge Viking red moustached guy who never got out of his bed because he didn’t have the money to pay his rent and who feared, if they caught him with his feet on the floor, he would get chucked out.

So what? I had a place to stay, a roof over my head. That was something.

In the weekday evenings, when drinking was never done, the men would mostly gather in the basement room and watch the little telly here. Nobody really spoke to me much at first. One evening I tried to break the ice with Frank, who was a cool-looking Northern Irish man who looked like a rough cross between George Peppard and Lee Van Cleef. Frank was evidently struggling with the crossword in the paper, and this was the first tiny sign of something I might be able to help with. I was sitting on a chair beside him when he groaned for the fourteenth time and scribbled a word out.

“What’s the problem?” I asked, smiling all the time.

He looked at me.

“There’s no problem,” he said as he turned away and went back to his puzzle.

They were fine men, just tough and circumspect in their relationships. The vast majority were from Northern Ireland, and they retained the natural caution that growing up there in the sixties and seventies would unavoidably instil.

There was no magic bullet. Over time, as I stayed and settled in, I became a trusted (if odd) member of the cohort. I did my own thing and minded my own business, and the men came to accept me, probably for holding my own with them. I was so different to everyone else there. I was the only one under twenty, the only student, almost the only Southern Irish person. I was naïve and possibly a bit timid, but I was funny too and, after I learned how far I could go with a joke or a quip, I think I gained a little respect for that.

People just get to know people too, don’t they? One Friday evening, in the quiet time before the pubs let out, I was watching the film of ‘Woodstock’ on the telly. I got a bit lost in an extended song by someone or other, eyes closed, going with the flow of it. When it ended, I opened my eyes and Crossword Puzzle Frank was grinning over at me.

“You were really enjoying that,” he said, with some hint of amazement in his voice.

“I was, yeah,” I replied, and, in these tiny ways, friendships can be started.

I generally went home for the weekends because the level of debauchery and drunkenness in the basement room often reached epic levels then. In weekends where I had to stay because I had work to do, I would camp out in my top room, sitting on the edge my bed with my drawing board and tee square balanced on my knees and a gang pack of fig rolls by my side. I would go to a movie on Saturday night and have a McDonalds but, otherwise, the fig rolls were my primary fare until Monday evening’s dinner.

Weeknights, there were often epic games of 25 around the basement table and I became quite good at it. Mostly because you didn’t want to play the wrong trump at the wrong time to this crowd.

But mostly it was the telly.

One evening, a sizable bunch of us were watching ‘Death Wish’ on the telly when, suddenly, the basement window exploded inward in a shocking hail of shattered glass. I sat in my chair and looked around.

“What the hell was that?” I asked the room.

But the room was empty, apart from two guys behind the couch. Everybody else had vacated the space with blinding speed. The Northern Ireland reflexes were much more finely tuned than my own.

The ‘explosion’ had been caused by a drunk passer-by on the street finishing his bottle of beer and discarding the empty through our basement window. His failings were eloquently pointed out to him by some of my housemates. The less said on that, the better, I think.

There was one other resident of the house who was not a building construction labourer. A sullen middle-aged man, he wore a dark grey suit at all times and came and went from his dinner without much to say. He never had anything to say to me.

It was late on a quite a Monday in the basement TV room. There was only a handful of us in the room and I was the only one bothered with the telly. I was watching ‘Film ’81’ with Barry Norman and Barry was busy reviewing the latest Disney animation ‘The Fox and the Hound’.

This man came into the room and stood there.

“Is anybody watching this?” he asked, pointing towards the television with his chin.

Nobody spoke, until I did. I had been there a little while at this point and felt I was a member of the household.

He glared at me, seethed a while, then erupted.

I figured it was time to go to bed. Sometimes the temperature rose in the TV room, and it was best to get out of it. I got up and left the room.

But the guy came after me. He caught up with me on the stairs. He spun me around and grabbed me by where my lapels would have been if my jumper had lapels.

He had quite a bit of age, height, and weight on me. I couldn’t do much more than let him run down his rant and hope it didn’t get too bad. Eventually he stopped and stormed back towards the TV room, most likely to change the channel.

Word got about the house that I had been accosted. When the ladies who made the dinners let me know that the guy had been warned about his behaviour, I didn’t have much faith in that. But when Frank asked me my opinion on five-down and quietly told me that the guy would not trouble me anymore, I figured I was okay… and I was. The guy moved out shortly afterward and I, for one, was not all that sorry to see him go.

Frank was philosophical about the little interaction.

“Men in his line of work sometimes get like that at his age. You have to watch out for them.”

It turned out that he was a schoolteacher.

This second-year accommodation of mine was no place for a young student. I should have started looking for a different place at first opportunity, but I stayed all year. Then, for third year, I went back again.

It wasn’t ideal, far from it.

But I learned some stuff there that has served me well over the years, I think.

I also lived in a B&B for a while. This was in Aberdeen and I was a lot older than eighteen but still retained, as I continue to, some of my youthful naiveté. I don’t talk about that time. It was during the lowest time in my life and, well, I just don’t talk about it. The room I had, at the start at least, I shared with another guy and there was a third who had to cross our room to get to his glorified cupboard. It was an odd setup but, as always, the poet in me hoped to find inspiration in the diverse mix we shared the place with. He never did. In fact I only wrote one poem the whole six months I was there and I've never drawn on any of my experiences from that time since which, personally, I find a bit odd, out of character, but I’ve never got my head around how this whole inspiration thing is supposed to work.