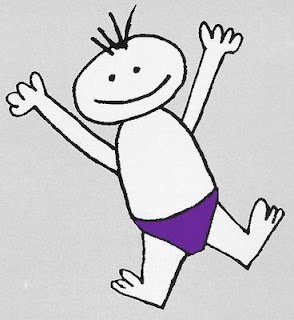 I was talking to a friend of my son today who ripped his pants around the butt area while playing volleyball in school.

This reminded me of the time my class went swimming and somebody stole my trousers.

I think I was eleven or maybe twelve at the time.

We went on a school expedition to the pool so all my mates were there to see the show.

One of those 'mates' probably still has me 'strides' in his house somewhere.


The teacher had to give me a lift home in his new car with a towel wrapped around me for modesty. But modesty hadn't really prevailed back at the pool as I hunted for the missing article(s?) in the changing room.

Nobody helped me much in my search and everybody seemed to derive much outlandish enjoyment from the fact the I was wearing purple underpants.

I figured that I was in for a hard time when I turned up in school the next day but I was wrong, nobody even said a word.

In fact, many months passed and nobody ever again mentioned the purloined trouser incident.

I have to admit, I was impressed.

Or so I thought.

One day, deep in the Summer holidays, I was arguing with my friend Steve out on the street - doubtless about some obscure rule of soccer. I was winning the argument hands-down when his little four-year-old brother, Gavin, suddenly and quite eloquently sprang to his defence.

Own those purple knickers, Ken. Too many men go for the boring white.

I don't know if I should thank you or not. You've reminded me that on my last day at school I serreptitiously removed my underpants in the school clocktower (can one serreptitiously remove underpants? It's impossible without taking your trousers off) and hoisted them up the school flagpole. I was very pleased with myself at the time, as the pole was mounted on the small, unfenced roof of the clocktower. To get there required you to climb a long, wobbly ladder.

They were, as I remember pale blue polyester Y-fronts.

Hello Susan, I'm afraid I haven't done purple since that episode many years ago. Maybe this is the inspiration I need to own some primary colours again. :)

Dominic, yes I believe thanks are in order for reviving this dubious memory. I'm sure there is something 'pun-like- to be done with flagpoles and underwear but this may not be the time for me to try it.

Why didn't you just wear your bathing suit home ?

trousers are pants???
strides are what pants???

ya bleeding means.....means your wearing???

These little things can scar you indeed! Great post and what a great wite you have. Rare to find good writers around. I love Ireland too - my grandmother came from there.

Dear Alan: My swimwear was wet, I would have ruined the seat of my teachers new car with my dripping Speedos - an unattractive proposition at any time.

'Pants' has now (quite interestingly)come to mean many things - trousers: yes, underwear: yes, a term meaning something of very poor quality: yes (ie. my presentation to the board yesterday was complete pants. :)

Now I'm confused - 'Coronation'... what's that? 'Toking' is smoking some kind of illicit drug? And it all sounds a bit... Germanic??

Linguistics are dead tiresome, aren't they? :)

Hi Lily: Thanks for dropping by - I probably knew your dear Grandma, Ireland's like that. :)

lol, the title tickled me when I saw it. :D

Great story. I don't remember my swimming days too fondly. The changing rooms were always trouble. In and out as fast as could be was the motto. Half of us were still soaking wet in our clothes upon exit. It was that bad (the pranks and mischief)..

I don't recall anyone stealing anything though. At least not of mine...

This experience must have made a mark or you wouldn't be able to recall it so vividly now.

Such are the experiences of childhood, some are pleasant and some are not so pleasant.

I only remember pantie raids that the frat boys did on the girls' dorm in college (freshman year of course). Some of the more daring girls would give the guys their laciest and either naughty red or sinful black panties which were then attached to car antennas and paraded through town.

This was in the days before thongs (so I'm dating myself severely) otherwise it would have been all thongs and hardly worth noticing.

This may actually be one of those times when being a girl was good. :)

Um...is it weird that we both have butt posts on our blogs this week??

I'm so going to call you PK from now on. So, do you still wear purple knickers?

Your post reminds me of the time I went body surfing at Yanchep (north of Perth) and got dumped.

I struggled to the surface, bleary eyed and gasping for breath and looked down to realise that not only was my bikini top in disarray but that the bottoms were totally missing. Gone. Nowhere to be found.

After he stopped laughing my boyfriend finally brought me a towel to emerge from the water gracefully - or at least as gracefully as I could muster.

What I would have given for a pair of pupple knickers!

Hi Jack: 'The changing rooms' were always trouble' how true, how true! :)

Hi Jena; the experience left a vivid pupple mark on my memory.. :)

Pantie raids? By Frat boys? 'Frat is a great word in this context, isn't it?

Hi Hope, I'm sure there's loads of times when being a girl must be good. I, um, just can't list them at the moment...

Dear Cellobella, your story *so* wins! End of. You should post it, excellent. :)

At some point in my pre-youth my gran took me to Hampton Court. I paddled in the Thames for a while and then somehow slid, feet first, away from the bank and out into the deeper part. That was when I discovered I could swim! Somehow I splashed my way back to the bank. My Gran removed all my clothes and replaced them with her fur coat. I had to wear it (and nothing else) all the way home on the bus - a good hour's run. Yes, little things can scar you...

You wrote about that boy so funny. However, I'm sure at the time, it was quite traumatic to you. What's good about looking back at our childhoods, we find our painful experiences quite funny now. I'm glad you're well over it now.

I had a pair like that! (Wait a sec - sharing too much methinks).

Ken, thanks for the explanation as to why you didn't wear your bathing suit in your teacher's car...I was momentarily afraid he was a pedophile....Must be the world we live in because 25 years ago I would not have thought that.

Lots of things happen to children in school that fall on the side of embarrassing...maybe one day I'll write a post about my first day as an activist when I was in the first grade and how I eventually caved to the establishment after achieving the moral victory.

Hehe but I say PK with the deepest of affection :)

Dave - Thanks for sharing. I have a whole different mental piccie of you now! :)

Hi Tasha: I think all my weird stories are starting to get you worried about me! Don't worry, the stuff that really hurts doesn't land here until the hurt dies down.

Sounds like there's a post there all right Matt. On the first point my teacher was a super guy who left all kinds of invaluable time-bombs inside my head.

Now Reggie, it's tricky to say 'Puppel Knickers' without a giggle.

The picture you chose for this blog are hilarious. There's nothing wrong with wearing some purple pants.