The Best I Ever Did 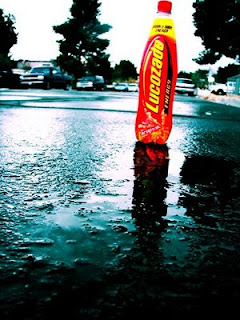 I was on my way home to Castlebar one Saturday evening when I stopped into a shop in Sligo to do the Lottery. An almost-elderly man was getting directions from the young guy behind the counter.

“You go to the bottom of the road then turn left then… are you driving?” He was not driving. “You’re walking? It’s a terrible long way to walk.”

I asked them both where he was going. The man told me.

“I’ve walked down from the hospice," He said, "My old neighbour is up there, dying, and I got a lift in from Manorhamilton to visit him and all he is wishing for is one drink of Lucozade and I can’t find a drop in this blessed town.”

I glanced at my wrist. I was late for home. My children would be in bed before I got there, if I didn’t get a move on.

“Come on,” I said, “We’ll take a quick spin and find your friend some Lucozade.”

He looked at me a moment. I was unshaven and roughly-dressed. I could have been some kind of kidnapper. He decided to trust me. We drove around all the service stations. For some reason, there wasn’t much Lucozade to be had that night. Eventually we found a place down on the Bundoran Road. I waited in the car and was delighted to see him emerge with his Lucozade – a large bottle under each arm.

He wanted to walk back up to the hospice. He thought he had imposed enough on my time.

We chatted about the usual things on the way back. When we stopped at the gates, he slipped something onto my lap.

“I got you a scratch card,” he said, “for your kindness” Then he went off to deliver his Lucozade

After I had dropped him, I drove for a while then pulled in and scratched off the lottery card he had given me. There was a two Euro prize on it.

Please God, when I'm dying, I hope I have such a good friend as that man, and you! what a great story!

Was that the service station by Horkan's garden centre? They're always good.

Hi Susan: It was! The only Lucozade in town, that night.

That story made my eyes leak, just a little bit.

Kindness is rewarded in the most interesting ways. :)

just when I think you are the nicest person ever, you tell a story like this and I realize you are even nicer.

Hi Daisy: 'Didn't mean to make you leak. You have nine lives so you don't have to be anxious about mortality issues as of yet.

Hi Hope: You are right.

Now, if his dying friend had been looking for one last shag this could have been a very different story indeed. (Sorry, I've been over at Rachel's blog and they're all talking about sex and I can't get my mind out of the gutter).

Ha! Thanks Jim for a very welcome perspective.

See, if he's wanted 'that' I'd have known exactly where to bring him. :)

Ah Ken -- what a great guy you are. Wish there were more of you around. The world seems to be in short supply right now.

I know I can google it, but just what is Lucozade for those of us from 'cross the pond....

Hi Margaret, Thanks. I'm a bit embarrassed, really. When I posted this, I never saw it as an 'aren't I great' story, I just liked how light on excess words it was. Now I seem to be blowing me own trumpet when, in actuality, I don't think many people would have done any less in the circumstances of those poor men and the few minutes required to at least help a little.

Google nothing while I am around my dear! :) Lucozade is a yellow glucose based fizzy drink. It was almost de-rigour to bring a bottle to sick folk in hospital when I was young. It used to have lovely see through yellow wrapping around the bottle and if you held it up to the light, the whole world looked Golden and Magical. Alas sometimes it is not.

Cold showers all round...

Ahhh thanks for the definition!

No, you were not blowing your own horn at all with your tale.

Twas the other gentleman who's horn you were blowing, but the goodness of your share of the deed came out from under that bushel you were trying to hide it under.

Hi Ken, wow! it was indeed the best thing you ever did. Of all your stories, this touched me the most. Going out of your way to help a stranger speaks of a noble heart...eherm...not, don't let that go into your head.

Happy blogging and God bless you.

Ken, I'm pretty sure you're wrong about just doing what anyone would have done in that situation. Most of the time I wander around so much in my own little world that I wouldn't have even noticed the man or his predicament.

But then again, as and American I consider it my sworn duty to be as self-centered as possible.

Margaret: "Twas the other gentleman who's horn you were blowing" Obviously, I deny everything. :)

Great story, makes you think, what's the best we've all ever done??
Just a note...my mom is 84, this past summer she told me she picked up a girl walking down the street and offered her a ride home. Mom lives in a dangerous neighborhood, so I said, you should be careful, giving rides to strangers could be dangerous, she said, "it was nearly 100 degrees and she was wearing a Walmart uniform, what's the worst that could happen, I'm 84? I thought, good point!
Thank's for the story Ken!

I particularly love the little kick at the end.

But no, that's not what I would have done in that situation: I would have been all eye-rolly because the old guy was holding up the queue and I really wanted my Moro and Cidona. So yes, you are unusually helpful. Live with it ;)

I love stories like this. Your kindness was acknowledged by you winning 2 Euros. Congratulations. I'm happy to hear it happened to a decent man.

I really enjoyed reading this.

I once won a tenner on the UK lottery, but I did nothing to deserve it.

you are a very nice person,God Bless Your Heart!

Thanks for all your kind comments on this. If I comment individually, like I always love to do, I will blush myself to death.

Like I said, it was the best I ever done so it's all downhill, story-wise from here.

That makes 'em funnier though :)