See You for Two out of Three 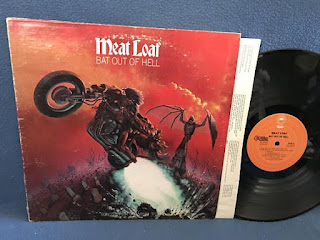 Meat Loaf sadly died this week. This won’t be an attempt at an obituary, I wouldn’t be equipped for that. But it’s worth a couple of words. That’s for sure. So here they are.

I realise it sounds more like a Jackson Browne song, but in ’77 I was fourteen and the music was everywhere. Punk and New Wave hadn’t yet crashed over our heads and, in that year after its release, the charts were full with songs from the likes of Grease and Saturday Night Fever. Barry Manilow had his place in the chart, as did Engelbert Humperdinck and ABBA. Things were getting ready to change but they hadn’t changed yet.

Then the ‘it’ I referred to in the paragraph before landed in our consciousness and took firm root there. ‘Bat out of Hell’ did not seem to grab us off the back of radio airplay or stuff on television, not to my memory anyway, it just leaked into our awareness. A sort of a, ‘Have you heard this?’ thing.

In more recent years, the way the production of the record was approached was quite the revelation to me. Apparently, the main creative forces of Steinman and Meat Loaf had come out of a musical theatre background and the album was born out of these influences as well as many others. A documentary I saw about the birth of the album gave it a sort of ‘Glee’ or ‘High School Musical’ type of preppy vibe.

We, the fourteen or fifteen-year-olds, didn’t get that vibe at all. For us, Bat out of Hell, seemed excessive and rude and out-there in a way that we must have craved but didn’t really know it. The young people in the songs were crashing motorbikes and getting off with each other down on the hot sands of a midnight beach. Our bikes were push-powered, and our beaches were the very antithesis of hot at any time of the day but still the songs connected in the way they openly talked of lust and need and general youthful over-the-top-ness.

Bat out of Hell wasn’t the only thing that year but it was certainly a big thing. The music of our day seemed washed out and for another generation. The music of yesterday drew us more, Bob Dylan, Leonard Cohen, all connected to us and spoke to us but they belonged to other, slightly older people. When it landed, Bat of Hell might have been a bit tacky and a bit OTT but, dammit, it was ours and nobody else’s and we grabbed it.

We knew all the words, and there were lots of words. I’d say I still know every one and, with the lightest of kick starts, I could bale through them faster than any boy has ever gone. The words spoke of things we knew nothing about - varsity tackles, cracker jack boxes and such - but it spoke of things we knew and felt too and that peculiar juxtaposition of the strange and the familiar made for a momentarily heady brew that has never since fallen out of our affections.

My best memory of Bat Out of Hell comes from Valentino’s, the night club I tried and tried to get into way back then. The nightclub I failed and failed to get into until, one night, I didn’t and, from then on, I got in every week. I’ve covered that story in another post here.

The point is, there was a girl, and she was a friend of a friend, and I didn’t really know her very well and she didn’t know me. It is a sad truth that I can’t even recall her name at this point. She was nice but she had no interest in me and the feeling was fully reciprocated on my part. We both had our eyes elsewhere, on places where we probably wasting our time. Such was the nature of those evenings.

But we developed a thing, a very little thing, in Valentino’s. Every week, Tommy Higgins would play ‘Two Out of Three Ain’t Bad’ as part of one of his slow sets. This girl and me must have had a slow dance to it one night and, though I’m filling-in here, I imagine we both knew all the words and sang them aloud as we swayed around and laughed. It must have been fun because, every week, she would say to me, “Come find me for ‘Two out of Three’,” and I would, and we would sway around and sing and laugh together and maybe stick around for the rest of the set and then simply be gone.

You’ll probably read this and think, “Silly Ken, this was some unrequited attraction that his dumb fifteen-year-old self couldn’t even recognise.” But, no, I don’t think that’s right. For my part, I never really did terribly well at dances and such: I was scruffy, and my hair was too long in all the wrong places and my complexion wasn’t all that great. Thinking about it now, I was like one of those two guys on the periphery of ‘Gregory’s Girl’ who watch romance unfold all around them and who make plans and scheme schemes but who never really get anywhere much.

When ‘Two Out of Three’ played, somebody wanted me, if only for the briefest of interludes. Somebody sought me out or required me to seek them out. That’s what the album was like too. Somebody had made something just for us. It might not have been perfect, and it might have been a little bit off-kilter in places, but it was just ours.

Perhaps, in meeting up on the beer-soaked floor, and whirling around it one more time, we were both subconsciously reflecting that. I don’t think so though. Not really.

Like the album itself, it was just our little moment.

Thank you, once again, for a heartening tale that plucked a smile from nowhere again. You always manage to brighten my Sundays.

If I were to compile a Soundtrack of my Life there is absolutely no doubt in my mind that Bat Out of Hell, the track itself at least, would be there but, like many of my friends over the years, I've long since forgotten how we first met. The single charted in early 1979 and I know where I was then, recently married for the first time, in our own flat and doing well in my career. All in all it was a pretty good time in my life. I was reading a lot of good books, found my poetic voice and, dare I say it? yeah, why not?, happy, maybe, until recently, the happiest I've been in my life.

I'm looking at the charts from the time and trying to see what jumps out. Elvis Costello & The Attractions, 'Oliver's Army', Dr Feelgood, 'Milk And Alcohol', Ian Dury & The Blockheads, 'Hit Me With Your Rhythm Stick', Dire Straits, 'Sultans of Swing', hell I've even got a soft spot for Lene Lovich's 'Lucky Number' but what gets me, looking back, is how fleeting Meat Loaf's appearance in the charts was, barely a month. I was done buying singles at that time but I do know at some point in my life I've owned a copy of Bat Out of Hell but none of his subsequent releases and yet I still consider myself a fan, both of him and Steinman. I loved the latter's work with Bonnie Tyler but my favourite album of his has to be Bad for Good especially the track 'Surf's Up' which I once played on repeat (by which I mean I rewound the tape again and again) all the way from Irvine to Motherwell and I've never listened to ANY single track over and over like that.

There're tracks that you hear for the first time and you know they're game-changers. 'Anarchy in the UK' was one and I do remember hearing that on the radio for the first time in that flat and wondering what the f-,g- and h- I'd just heard, and I had a similar WTF moment when I first heard 'Autobahn' but not, surprisingly looking back, 'Bat Out of Hell' although to be fair I couldn't tell you where I was when I first listened to The Beatles or David Bowie. I did listen to the whole album a couple of weeks back and it's stood the test of time without a doubt. Sad that he did so much damage to his vocal chords he never got to record Bad for Good himself as had been the plan. It would've been a worthy follow-up. He did end up covering a few tracks and I'll leave you with his version of 'Surf's Up' although I still prefer Steinman's.

Superb Ken - another slice if life! I was busy swapping my first album from some K-tel compilation to Bat out of Hell in Star records in the Five Star arcade 😀