Making Sure That Puddy is in Her Bed 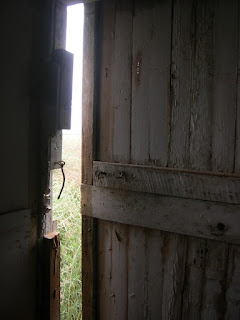 I have a new part to my nighttime routine, and I thought I’d best share it with you. Every evening, sometime before it’s time to turn in, I put on my shoes and venture out into the back garden. It’s dark out there so I need the torch on my phone. I’ve got good at switching it on though, at first, I kept turning on Airplane Mode and other monstrous things. It’s not a big mission I’m on, in fact it’s the simplest of things.

I just want to see if Puddy is in her bed for the night.

I shine the phone light in the garage window and that usually does it, but sometimes it’s a little opaqued with condensation on the inside. When that happens, I have to peep my head through the side door that is now permanently slightly ajar and shine my light in.

Nine times out of ten, Puddy is in her bed. Sometimes she looks up to see what this light-thing is all about and what this idiot-of-a-human wants this time. The best times, though, are when she is sound to the world, curled up in tight little ball in the straw, with no clue that I am there.

Regular readers of the blog will know Puddy as the semi-feral cat who gave birth to kittens in a precarious position in my garage last spring and who thus instituted a series of events which has led to this moment, where she sleeps in her house in the shed, suffers regular name changes, and gets fed whenever she wants it (and many times when she doesn’t). You can catch that story via this link, if you ever care to.

As Autumn set in, Patricia and I resolved to provide some form of comfy base for Puddy in the garage. We went to the pet store and came among a small kennel which was assembled on the shop floor. I begged the girl to let me buy the already assembled version, but she wouldn’t do it, so we had to bring home an Ikea-style cat house in a box. Although I set to it with some dread, it was actually an easy self-assembly and it wasn’t too long before the little ‘housheen’ was sitting comfortably in a defensible corner of the garage. Once it was quarter filled with fresh straw, it was quite an inviting little place and the cat, normally highly suspicious of every damned thing, took to it with surprising enthusiasm. Trish added in a microwavable heating pad which she got online and which I thought was a tad over the top but which I still heat up and place under the straw every evening. The cat goes in every evening, sometime after dark, when the neighbourhood patrols have become quiet and uneventful. She forms a cosy half-egg-shaped nest in the straw and settles in for the night. In the morning she emerges, yawning, stretching and musically proposing breakfast.

Things have progressed quite a bit since my last report. The cat has gone from being called ‘The Cat’, through being called ‘Magda’ after her foster-carer who minded her while the kittens were being weaned and while she was off getting neutered. We also tried the name ‘Blanche’ for a while – because she is largely white and has always relied on the kindness of strangers. None of these seemed to fit and the cat patently didn’t give a toss either way. Trish suggested we might call her what I had been subconsciously calling her for some time now. So ‘Puddy’ it is. Like I said, she doesn’t mind, and I call her that anyway.

We feed her twice (and sometimes three times) a day. Sometimes she eats it up and, just as often, she licks off the gravy and leaves me to tidy up the rest because she’s had a better offer down the road. We can provide for her all we want but she is still a neighbourhood cat, and she knows it. Offers of food seem to come from a number of sources. I met a neighbour before Christmas who was off to one of those European supermarkets because he reckoned that he got the best value there when buying chickens for the neighbourhood cats. It’s little wonder my Tesco own-brand white fish can’t always compete. Whatever the source, the cat is now sleek and well-nourished, and she stalks our block with a keen eye and a ton of attitude.

But the biggest change has been tactile. The cat had always been completely hostile to the idea of being touched in any way. Any such advance would evoke hissing and hand batting and, if you didn’t quickly get the message, a lightning-bolt scratch across the back of your hand. But Patricia is patient where I am not and, over months of interaction and fun in the wilds of our back garden, after hours of quiet time together, and a fair quantity of antiseptic cream, the seemingly impossible has happened. Every evening, the cat, upon seeing Patricia come home from work, trots to her ‘petting-point’ on the paved part of the back garden. There, she permits Trish to stroke her and scratch behind her ears to both of their heart’s content. A bond has been built where such a thing did not seem possible, and both seem to benefit from it as there is audible purring on both sides.

As for me, I don’t push it. I feed and replenish the straw and microwave the thing. I’m a surly uncouth lump and I don’t want to undo any of the marvelous work that Trish has done in gaining Puddy’s trust. I think I shall remain the ‘hired help’ and enjoy those two getting on with it from a safe distance.

Will there be more developments? Will Puddy advance ever further into our lives as I know cats can tend to do. I can’t say. I have a little allergy which might prevent many further advancements but who can tell? I’ll keep you posted. You know I will.

Why do I go down the garden, hail, rain, or snow, every evening, before my bedtime, to see if the cat is in her place? I don’t know. I find it relaxing and reassuring in a funny sort of a way. I think it’s something about having been able to do something good and to see evidence of it, yet again, before the long day closes. To have helped another little soul in some tiny way – it’s as good a way as any of rounding off a hard day.

I don’t need Puddy to be in her bed. She is still at least partly a wild thing, and she must come and go as she pleases. If there are nighttime assignations to be honoured, down the road or in some adjoining back garden, so be it. But it is somehow very pleasing to know that she knows she has a base that she can return to whenever she wishes, out of the rain, the wind, and the cold.

I don’t need her to be there.

But it’s always nicer when she is.

You have your Puddy and we have our Moggie. He’s technically next door's cat but I think he’s pretty much resigned to sharing his cat—whom he calls Spock in case I’ve not mentioned this before—with all and sundry. Carrie’s started referring to Spock as our “timeshare cat” which is as good an expression as any. He turns up at the window—the back of the bench is at the perfect height—generally two or three times a day although I’ve seen him ten times in the one day and not a hide nor hair for two days straight. He is, as are all cats, a law unto himself. The chair by the heater in the kitchen is now “the cat’s chair” and he has his own Amazon box although I can see no logic to where he chooses to bed down when he chooses to bed down. Sometimes he gobbles down his grub and wants out, other times he kips for hours. This morning Carrie told me he came up to the living room to get her to let him out and, she said, “we had this whole conversation going down the stairs, him explaining to me why he needed out so urgently” and this afternoon for the first time I tried him with a piece of string which wasn’t a complete failure. He’s not really a playful cat nor even that inquisitive which is odd. He gave the house a once-over, even slept on our bed once, but he seems to have claimed the kitchen as his domain. We leave him to it and he comes and gets us when he's had his fill. He’s not Birdy but to be fair it took Birdy a few years to become Birdy. I forget sometimes just how long we had him. Discounting family my second-longest relationship in my life has been with a cocktail.

Why do we do it? I don't think it’s too hard to fathom. The need to parent is a strong one and hard to resist.