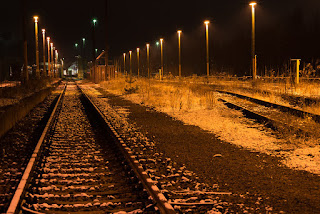 Whenever I have to meet someone off the train - and it’s usually one or the other of my sons - I always try to get to the station quite early so I can walk up and down the platform and generally take the place in.

I’m just back from there now. The train was about 30 minutes late. No hardship. Some time to breathe.

I love our train station here in Castlebar. It’s got a kind of ‘Once Upon a Time in the West’ feel about it. There’s only one platform and one track. There’s a little waiting room and a luggage trolley dispenser that nobody ever uses. There’s a walled-off patch of Japanese Knotweed that we’re not supposed to touch, so we don’t.

One of the main things I like about Castlebar station is the perspective. I always seem to have been engaged with perspective. Even as a young kid, drawing young kid pictures, there would always be a road, leading to some distant mountains, and the road would stretch away towards those purple hills, gradually converging into a single line as it went.

In later school, doing technical drawing, I loved those perspective exercises we had to map out on our drawing boards with our T-squares and our lethal 2B pencils. A plan was drawn, a viewpoint established, a line of vision plotted, and two vanishing points laid out. If you set them poorly, the result would be a misshapen mass, spiky and unconvincing though geometrically correct. But when you got all those points and lines right, and you joined them all up correctly, the appearance of the shape within the defined area at the centre of the sheet was like some kind of manageable magic.

When I walk to the front end of Castlebar station, and as I look back down the track to where the train will come from, the perspective is perfect. Track and platform run off to the limits of my vision, turning a gentle curve to the left, down in the distance. The poles along the side get progressively smaller and smaller, even though they don't really. It is perfect perspective, just like I used to draw. It makes me feel all right.

This is where the front of the train will stop when it finally arrives. The driver will sit right across from where I stand. And everything falls away from this point, from my point of view at least. This, of course, is the case for any point in the world at which I might care to stand but, here, at the front end of Castlebar station, it is more aptly demonstrated than anywhere else in my current world.

I think it makes me feel a little like I am centred in my place.

It makes me feel at home.

There’s usually time to walk all the way to the other end of the platform before the train arrives. It’s not all that far but it’s far enough. This end of the station is a different sort of a place. The perspective seems less marked when you get there and turn and look back. The turning in the track beyond the station happens sooner and thus impairs the effect. The feeling down there is one of being at an outlying place. A place where people don’t usually go. The platform tapers down to the tracks and a stern sign warns you to go no further. If you want to venture beyond this point, you had better be on a train, with your ticket gripped tightly in your little hand.

If the front end of the platform feels like a confirmation of home, this far end feels more like the Ends of the Earth. For me, it’s a sort of an edgy feeling. One step from where I should not go. My town behind me, an uncertain place ahead.

The sign is one simple sentence, written small. It reads: ‘Talk to us if things are getting to you'. There is a telephone number at the end.

Back at the safe end of the station, the perspective is geometrically correct, reliable, and reassuring. Out here, nothing seems as safe or as clear cut. It is a place where the end of the platform might not always be far enough to go. A place from which it may prove hard to go back.

I think it can be okay to venture to the far side of the station now and again. To peer over and know the danger that lies there and the lines that can be thrown to help if ever they are needed.

But the front end of the station is the place to try to be. Not only to maintain a little perspective but also to know that the perspective is true.

The train is late but it’s coming now. I can hear the whistle when it’s still three minutes out. There’ll be a tired face off the train and a heavy bag to help with.

It will be time to go home.

This is a great piece of writing, Ken.

Thank you very much, Marc. Nice to see you back on the Twitters.

Trains and techie drawing. I, too, have great affection for both. As soon as I took my first techie drawing class I knew that’s what I wanted to do for a job and I never wavered. I left school on the Friday and got the train (for the second time in my life (the first was the interview)) to Ayr to start an apprenticeship in an architect’s office. And that’s when it all fell flat on its face. I was good at techie drawing—Engineering Drawing O-Level, 98%, top of the year—but they really don’t prepare you for the real world and pens and a degree of accuracy I was unable to maintain at the pace I was required to work. I resigned after three months which was just as well because they were going to sack me. Talk about gutted. There was no Plan B.

Our new house is less than a mile from the local station which pleases me. Having a free bus pass it would be daft to use it but having it readily available does please me.

When the world becomes passably sensible again, go and take a train ride. You know it makes sense. :)