On Learning of the Death of Sean Connery 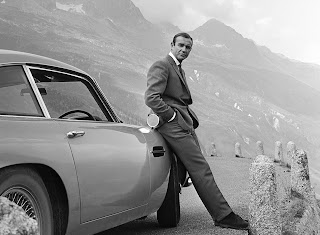 I am sitting here typing when Social Media starts to cough and splutter its news and its reactions to that news. People instantly start to over-react and under-react in roughly equal measure. Jokesters quickly post their gags before everyone else can think of them too.

I go into the living room, where Patricia and John are chatting.

“A famous person has died,” I say.

I don’t expect them to start to guess who it is. I am just trying to break the news gently. A list of famous people is reeled off. All the people on that list are all still around, as far as I know.

I tell them. They are appropriately impressed and reflective at the news.

I come back here to my desk, glance once more at the Twitter stream-of-consciousness at the news, then start typing…

But he was important to me all the same. We had history. Granted, it was that curious kind of ‘one-way history’ that we tend to have with famous people who don’t even know we exist. But, still, it was still some kind of a thing.

Sean Connery was in the first film I ever saw at the movies, though I didn’t know it then. The film was 'Darby O’Gill and the Little People' and it scared the shit out of me so badly that I’m still mildly traumatised by the thought of it to this very day.

Then came Bond. I was a Bond kid from an early age.‘I’m still not entirely sure how that happened. There certainly weren’t any of the films available on telly back then. I think it was because Mum and Dad were big movie fans, going every week. Perhaps their excitement at a new Bond rubbed off on me. I had toy Aston Martins and Walther PPKs. My first ‘conscious’ new Bond was ‘On Her Majesty’s Secret Service’ in 1970. I was seven, so I couldn’t go and see it, but I collected all the bubble gum cards and shared in the excitement of its arrival. After that came Diamonds Are Forever and I was allowed to see that one in the matinee with my friends. It all looked so gleaming and modern and, very oddly, it still kind of looks that way to me.

I think that moment kind of cemented me and Sean Connery. It represented a sort of release into the world for me. The moment when I was allowed go out and see a movie with my mates. Film have continued to be so important to me all my life. Perhaps that goes a little way toward explaining why I feel quite sad now, typing this, to know that Sean Connery is dead. Maybe I’m overthinking it. I don’t know.

I’m not sure we would have got on very well in person, Connery and me. I would imagine he would have had little time for someone like me and that, in return, he would have annoyed my hole on several different levels. Some of his stated opinions, particularly in regard to his attitudes towards women, are most definitely not shared by me. Accounts of filming would have him as an impatient, over-assertive and surly man. A man’s man from an era when that was not exclusively a good thing.

He was iconic though, wasn’t he? He was a presence, and he stayed that way all of his life.

The story of Sean Connery is written now. He seemed to realise early on that James Bond had handed him a licence to do things on his own terms, and that this was infinitely more valuable than any licence to kill.

Someone on Twitter wrote, “For me, it's not about who was the best James Bond. It's about who *was* James Bond. That was Connery.” I tend to agree with that. Well, I would, wouldn’t I? I wrote it.

Anyway, thank you, Sean. For what? I’m not entirely sure. For being an icon. For never really compromising, at least not in full view. For being someone to look up to, if only when you were up there on the big screen.

I bet you will.

Connery was like Wayne; they really only ever played—I use the term reservedly—themselves but we didn’t care. There have been undoubtedly more versatile actors out there but there aren’t many with their presence. I was upset when John Wayne died, genuinely upset, and I remember going down to John Menzies and buying one of those commemorative magazines. It bothered me I hadn’t see The Shootist and it was years and years before I did. Now so many people who meant something to me have passed the effect isn’t the same; I can see the bottom of the barrel. Of course we know they weren’t perfect but why should they be? We never were.