Getting In – Short Film 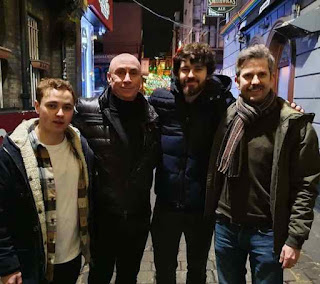 As many of you will know by now (I’ve been bleating about it on Social Media for a while), I wrote a short film and the talented film maker Richard Keaney bravely took it on and made it.
Thanks Richard!

This weekend has been the first opportunity for the film to be seen out in the wild. It’s an official selection for the Dublin International Short Film and Music Festival.

Due to Covid matters, the festival, quite rightly, decided to do its business entirely online. There are ups and downs to this.

One ‘up’ is that anyone who wants to can pay their one euro and see the short film in a suite of seven other short films, all of which are commendably good.

Oh, I should do a link, shouldn’t I? Thank you to those of you who watched the film over the weekend and gave such kind and positive feedback. It means a lot. If you’d like to see it in this festival, it’s around until midnight tonight, Sunday. Here’s a link to it:

(EDIT - The Festival is over now.)

I won’t go into much detail about the story here today. Those of you who know it seem to remember it fondly and well. Those of you who don’t might have a nicer experience coming clean to it. So that’s enough about that.

There is one thing I would like to share, and it’s something I have had to learn for myself even though I’ve been told it over and over again throughout the years.

Here it is, in a slightly roundabout way, though you’ll get the gist of what I’m going to say from the next line.

Will I embarrass him by saying a little about this? I hope not. My first full length play for teens was called ‘The Moon Cut Like a Sickle’. It was produced for the Linenhall Arts Centre stage in 2006 by DoYou Playhouse and, even if I say so myself, it was amazing. Richard was in the cast of that very first production. I would say his reading of Darko was the definitive one but that’s just pretentious on my part. (It’s a joke, don’t hit me). Richard was very good though. He went on to play a key role in the next play too. In ‘Midnight in the Theatre of Blood’ he played Donnie, who I named so that Richard could have two consecutive characters who were named Donnie Darko.

Simple. Richard adored the movies. Even then, as a fairly young teen, his knowledge of cinema was bordering on encyclopedic and his enthusiasm for the form was boundless. In that second play, Richard’s character engaged in a ‘pop quiz’ on Bond baddies which was largely written as a riff on the kind of discussions that teen Richard would have gladly taken part in all day.

As an aside, it’s such a pleasure to see the casts of those early plays move on through university and life and do so well in their chosen fields. That must be how a teacher feels.

Anyway, Richard went to university to study film and to build on that early knowledge. Then he started making films and his films have done really well. He has a great cinematic eye and a real feel for human storytelling.

We’ve always been in touch, to some extent. That’s where social media really does do us a service. When the script for Getting In was finished, I didn’t quite know what to do with it. I’m actually not the world’s best at submitting things to people. I was better at it years ago but I now seem to be more interested in the writing of something than the ‘placing’ of something, if you know what I mean. It’s a rather odd thing.

‘Getting In’ came up in conversation and Richard read it and saw some merit in it. He took it and, together with the wonderful producer Sonya Deegan, they made it happen, they brought it all to life.

It’s quite a wonderful thing to have this happen. To have a blank page on a computer screen turn into a living piece of storytelling that somebody can sit and see and hopefully take something away from. I am endlessly grateful.

And, yes, you know the point of all this. When I was younger, I was going to be a bit of a world-beater. I was going to scribble something down and the world would beat a path to my door to get it. I know now I will never be that. But, still, I love to write, and I love to see my writing placed before people for their consumption even if, perversely, I don’t push too hard for that anymore.

And I was told it and told it, but I had to learn it: if you want to make art and tell stories with your writing then seek out the people in your community and in your wider circles. People who think and burn a little like you do. Just talk to them, show them your stuff, look at theirs. Find common ground on which to co-operate and grow something good. You can wait your whole life for some fairy-tale ending that will never come or you can go to work with what you have and make your own story.

It’s a hugely rewarding thing to dream and to conspire and to see a little something get done.

Just keep it in mind, eh?

I knew I should've watched this as soon as I saw you mention it. Sorry. Been a bit pre-occupied (we get the keys on Friday). Hopefully if it become available again I'll be able to catch it.

I hope you're all moved in nicely now and that's it comfy and good. The wee short has a few more festivals to play and then it will probably have a life on YouTube and Vimeo. That's how they usually go anyway.

Only seeing this now Ken, you're gonna make me cry haha. Pleasure to adapt your writing, hope you think I did it justice. Our next one together will be another step up hopefully! You encouraged my creativity from a young age and I'm eternally grateful and honoured to finally make something with you which was always a goal I was aiming towards :).