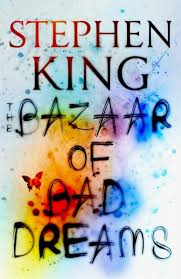 I have a bad habit of letting stories slip past me. Whoops, there goes another one. Well, it wasn't a story, really. Not exactly. It was more of a notion. A possibility. A fleeting thought. It's gone now anyway. I missed it.

Many of the writing gurus advocate the keeping of a little notebook to set down the passing ideas and phrases and events that colour one’s everyday life and, yes, I have one of those and, yes, I do that.

But this not so much about the jotting down of a ‘thing. It’s more about the appreciation of that thing as something of possible value and something which might, with a little effort, develop into a greater and a more lasting thing.

Potential stories which I often let slip past me.

This week, I’ve been reading Stephen King’s latest short story collection ‘Bazaar of Bad Dreams’ and it was while reading it that this thought occurred to me. I don’t think Stephen King is the kind of a man who lets too many stories slip past him. I think he’s brave enough to explore whatever germ might land in his brain, to let it grow a little, perhaps fertilise it a bit, to see in what direction it might expand. I think this trait is evident in those stories which make it into his collections. There are gems there and masterpieces and a share of duds (all subjective, of course) but, most of all, these is variety, diversity, colour and life. One feels that, if one tried a little, one could almost trace them back to the microbe that birthed them.

For my own part, I may spot a seed of a story, something that might become something worthwhile, but I don’t give it the necessary energy to see if it germinates. I also think that it’s something that needs to be done quite soon after the discovery of the idea. If not, the elusive something that initially made it seem like a good idea gets lost and, upon later revisiting, the note you made may just seem silly and even indecipherable.

One of the problems is that the idea, at first, can seem as if it’s nothing more than that. An idea. Is it a good one? Is it a duff one? The only way to know is to poke it around a bit and see if it starts to crawl.

One thing is for sure. The act of poking it will help it develop. It won’t develop much if it’s just left sitting there on its own. Granted, occasionally, an idea will jump up, all by itself, and turn into something magic right before your very eyes but that’s the exception rather than the rule.

Having finished my Stephen King, and having enjoyed it, I am now resolved to poke my metaphorical stick a little harder at whatever future idea I may cough out onto the floor. (Yuk… sorry)

Maybe I will kill it stone dead. Maybe it will simply grunt and shuffle away.

But maybe, just maybe, once in a blue moon, it will jump up and dance around for me.

Wouldn’t that be nice?

There a scene in Woody Allen’s Annie Hall, Ken, in which the camera is moving around a party and for a second or two the microphone picks up a snatch of the conversation in which a man—Jeff Goldblum as I recall—is talking to two others: “Right now it's only a notion, but I think I can get money to make it into a concept ... and later turn it into an idea.” It’s a wonderful bit of writing. And it’s something that’s stayed with me. I don’t know how other writers work—which is perhaps why for so many years I assumed I was doing it wrong—but I’m perpetually on the lookout for things I can turn into words. I suppose I’m a bit like a photographer wandering around with his camera. Everything is photographable but not everything is photogenic and less even worth the bother. Writers are generally thought to be good observers. I’m not. I’m pretty oblivious to most stuff going on around me and it amuses Carrie no end when I comment on some change she’s made a week or so before that I’ve only just noticed. That’s because it isn’t something that interests me. Not in that way. I’m only interested in things that interest me that way. People talk about walking into a party, scanning the room and seeing the person who’ll end up being the love of their life at the other side of the room and just knowing it’s them. I’m constantly on the lookout not for the love of my life—I’m pretty sure no one’s going to put up with me better than Carrie—but for that unique combination of… well, it can be just about anything, but I know it when I see it. The rest just passes through or by or away. Less and less these days gets my juices going. Mostly I’m reminded of things I’ve said before and I can’t think of how to say it better or if it really needs to be said again.