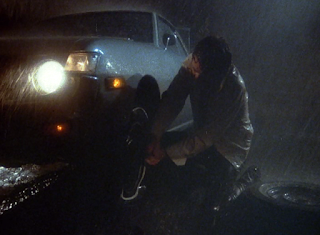 There won’t be any great point to this post so don’t be looking too hard for one. It’s more like a diary entry than a blog post, I think.

One morning, a bit before Christmas, I had to make a long car journey to get to a meeting. To arrive safely for ten in the morning, I had to leave at five. It was a dark dreadful winter’s night, pouring rain with a dash of hail and a fierce cold wind to boot.

I didn’t mind. I was in my car and had no intention of getting out of it until I reached my destination. I had an interesting audio book on board and such early starts never bothered my so much. In fact, the feeling of being up and out early tends to give me a rather neat feeling of moral superiority and over-achievement, God knows why.

I like to drive with a CD audiobook to hand. Our library had a good supply so there’s always something to bring along. On this morning, I had Christopher Lee reading some of Conan Doyle’s Sherlock Holmes short stories. Incidentally, I thought ‘The Adventure of the Lion's Mane’ was particularly entertaining – a little disappointing in the end, perhaps, but the journey was memorable.

So, anyway, there I was, motoring happily through the wet and windy wilds of County Galway when the tyre blew out.

Apparently, I was lucky that it was a rear wheel blow-out rather than a front wheel one. There was no bang or even pop. All that happened was thate my control of the car was immediately and dramatically compromised. The car swerved wildly on the road. It took a few yards to get it under control and stopped, albeit a bit askew, on the hard shoulder. It was probably handy that there were no other cars in the vicinity at the time.

I got out. The rear driver side tyre was in shreds on the wheel. The rain poured down, the wind propelling it deep into my clothing. My meeting awaited a long way down the road at ten am.

I had a situation.

I’m not what you would call a ‘handyman’ type but I’m not too shoddy at changing a tyre. I’ve done it quite a few times and helped a few people out from time to time. So, whereas this was a goddamn nuisance of the highest order, it wasn’t the end of the world. I’d get it changed and get back on the road and hardly be late at all.

I pulled the car across the road so that the flat tyre side was away from any oncoming traffic. The grassy verge was saturated and muddy as smelled faintly of cow shit, as Irish damp grassy verges so often do.

Here we go. Spare wheel out, car-jack ready for action. Overcoat draped on the ground in effectual Walter Raleigh fashion. I set to.

Three of the wheel nuts came off fairly easily, a little effort required but nothing outlandish. The fourth nut would not budge.

It simply would not budge.

I gave it my best. I screamed at it, jumped on it, I did all that I could but my measly four-sided lug wrench was not up to the task… or perhaps it was just me. I could not get that nut off. At one of my most concentrated attempts, the wrench slipped off and cut my hand, blood and rainwater mingling on the road. These were the moments when Bill Bixby's Incredible Hulk was prone to appear but Gamma Rays never got me that way.

The wind got up some more. The rain intensified and the hail content grew appreciably greater.

I now had a deepening situation on my hands. I needed some help. I could phone for roadside assistance but that would take too long. I would never make my meeting.

There was a house. It was up a lane which ran away from the main road just a little way up from my car. I trudged up to it. The house was in darkness, matching the rest of the world. There was a white transit van parked outside. It was the kind of van owned by a person who would have tools that were sufficient to remove a stubborn wheel nut. He was in there, safety abed. I could feel his presence.

I shuffled around to the rear of the house, drenched to the core. Inside a set of sliding patio doors an untidy Golden Labrador glared out at me, his upper lip snagged belligerently on his tooth.

The dog started barking. He also started throwing himself at the glass patio door, as if willing himself to break through and tear my intruder throat out onto the crazy paving.

The man of the house appeared, thankfully fully dressed in his work clothes. He opened the door and greeted me cheerily enough, the dog scrambled fearfully towards the bedroom. The man came out and had a go at my wheel nut and I was perversely pleased to find that, even though he was a big fella, he couldn’t budge the damn thing either.

He stared at it a moment, assessing the problem.

He went away and came back with a three foot length of gun barrel pipe. He put the useless lug wrench onto the wheel nut, slipped the pipe over the handle and applied a little pressure to the end of the pipe. The nut turned easily. It was impressive stuff. Remember that bit. It may be the only lesson in the entire story. Sometimes you need a little torque.

He offered to help me complete the changing of the wheel but my pride had kicked back in. I had the wheel nut off and my trusty car jack in hand, the rest was well within my capabilities. I waved him back to his breakfast and his fearful belligerent dog.

I’m glad my head wasn’t underneath the car in any way because that little jack snapped like a cream cracker and the unwheeled car came crashing down onto the road.

The man of the house had driven off, apparently eschewing breakfast and waving to me as he went. I was alone again, wet, frozen and now as late as hell.

I had to phone the car recovery service. There was nothing left to do. I phoned and they said somebody would be out within the hour. As I rang off, a car pulled in across the road. An elderly gentleman and lady sat in it and patiently waited. I couldn’t imagine what they might be doing.

Then it came to me. They were waiting for a bus to come along. I splashed over to them. The road was much busier now as morning, if not dawn, was fast approaching.

The man was indeed getting his wife onto the bus so that she could go to work. He happily offered me the loan of his jack and even came over and supervised me while I jacked the car up again and finally got the spare wheel on tight.

That was pretty much it. I got on the road and made it to my meeting, a bit late, a bit muddy and a bit bloody and probably smelling a bit of dung. The meeting people seemed to understand. We all get days like that, I reckon.

My practical advice would be to get a better nut wrench and jack for the boot of your car. The ones they provide you with are often not all that effective. I now have a nice long handled nut wrench which the tyre guy assured me will open anything that I may ever need to open.

I've just realised that I still don’t have a replacement jack.

Damn… must get on that.

As I’m sure I’ve mentioned once or twice over the years we’ve known each other I don’t drive. I can drive but I’ve not owned a car in twenty years give or take and the main reason I don’t own one is because I, too, have a number of stories like yours; in fact most of my memories of motoring revolve around breakdowns and accidents. There are so many to choose from: near Bridge of Orchy (a vanload of Geordies hauled me out of a gully that time), coming back from Aberdeen (a farmer with a tractor saved my bacon there), on the road to Carlisle, on the M8 coming into Glasgow, underneath the shopping centre in Irvine, the blown tyre somewhere up north, getting tailgated by a motorbike in Hamilton, the incident on the coast road between Berwick-upon-Tweed and Newcastle, the scrape in Newcastle itself and the Fenwick Moor was always a nightmare in winter. There will be more and, of course, there were the times when the damn thing—they were all damn things, ever car I ever owned—wouldn’t even start in the driveway. Computers have taken their place and although the crashes are virtual they’re every bit as upsetting but at least they can get fixed in the warmth inside. Cars get cold very quickly.