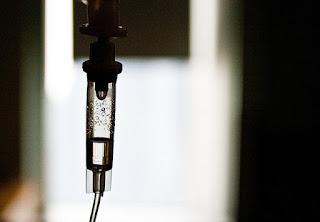 Of all the impressions, it is that of the finger nails that remains the clearest…

This week my wife, Patricia, was in hospital for a day procedure. Check-in in the morning, check out in the evening. In between, the joys of a general anesthetic and a little pain relief. The hospital ward where I waited for her, and with her, was a place of particular sensations and impressions, as all hospital wards in the past have been. One tends, however, to cast them aside at the last hand wash station and the automated rotating exit door and, by the time you’ve hit the car park, the likelihood is that you have left them behind altogether.

But they are peculiar things and perhaps worth jotting down...

It’s hard to be the guy waiting around a six bed ladies ward for your wife to return from surgery. Not as hard as being in the theatre, one might argue, but still hard. You don’t want to be in the way, to invade anybody’s privacy, but everywhere is in the way and nobody has sufficient privacy. The crossword puzzle is an enigma worthy of Bletchley Park and your book is a binder filled with worthless scratchings. Tea comes around but it’s not for you. A radio is too distant to hear. A television too angled to view.

A woman comes up the corridor, ringing a small bell with patient regularity. This has an ancient ritualistic feel which is entirely incongruous among the machine beeps and the digital displays. The bell is an unknown quantity. Is it a warning of some passing contagious disease? Is it a call to a meal? The latter is the closest to the truth for it is a nun in civilian disguise, alerting the patients to the arrival of holy communion from the morning mass.

I think about how I would hate this bell if I was here confined to a bed. The ‘oldness’ of it. But then I think of the people to whom it most be a comfort of sorts and I make my peace with it and smile at the nun as she glides serenely past me.

Patricia is wheeled back in. She is awake and not awake, all at the same time. Over the weekend, she was at a nice hotel with her sisters, celebrating a birthday. Everybody was submitting themselves to some sort of spa treatment but Trish, not being in the mood for pummeling, settled for an unheard-of manicure and a nail gloss of brightest perkiest pink. The nail varnish had to be removed again, two days later, to satisfy the requirements of the surgical theatre. Now, as she sleeps/wakes, I notice the pink remnants of the pretty varnish, clinging to the edges of her fingernails.

Time passes. A blood pressure machine farts its pressure cuff into life periodically, beeps a reading, then hisses itself flaccid once more. A saline drip dispenses its wares, oh so painfully slowly, into a cannula on the back of her wrist. I think how lucky I am. Fifty Two years old and I have never needed a cannula. I think this situation cannot easily pertain for very much longer. My genes and my wicked sugary ways will catch up with me soon enough.

As she dozes, I note the other people in the ward. Two are day-cases like she is. Both came back earlier from surgery and both are now alert and clearly casting around mentally for the quickest way to get out. One of the ladies gets regular mobile phone calls and her ringtone is that one that sounds like an old phone from the fifties. It seems in keeping with the ward curtains and the communion bell.

One ancient lady tries to nab every nurse who passes and they dodge her as best they can while answering her queries with kindness and empathy. Someone tells me that she clearly repeats her queries, all day, every day, with unerring regularity.

Another lady sleeps through her evident pain and snores. Her snores sound like words and I try to decipher what they are but they remain, like her dreams, outside of my reach.

The young girl in the opposite bed is overwhelmed with family visitors and a gentle tattooed boyfriend.

Two nurses visit now-sleeping Patricia and make copious notes in charts and folders. They whisper to each other that her 'sats' are visibly dropping and a red LED display confirms this with a 93, 92, 91, 90 countdown. An oxygen mask is quickly applied, without any sign of alarm, and the sats promptly climb back up again 91, 92, 93, 94… The rest of my time there is coloured by the numbers on that machine which, thankfully, stays high even after the mask is removed.

At last she is fully awake and tea from a tiny teapot and toast is consumed, breaking a day long fast. Another hour or two and we are free to go. We leave the old ladies and the young girl to their evening together. The others have already gone.

Four days later, it is the finger nails that remain the most vivid impression. It's almost as if they were a metaphor for the things we must give up when we need to be in a hospital, for the things we simply cannot hold on to.

Hospitals. Wives. Wives and hospitals. I find myself with a surprising number of memories to choose from. I think I’ll pick the one where I wasn’t there. My wife has had cancer twice and survived. Both required surgery. The first required a routine hysterectomy. I love the way they call it a routine hysterectomy because it someone trivialises the whole thing. You forget for a minute they’re slicing you open and removing chunks of your body. I remember when my friend Tom fixed our TV back in the day when fixing TVs was a thing people did. He handed me a couple of components he couldn’t find a place for and said, “Don’t leave it unattended.” That’s a bit how I felt after my wife’s hysterectomy. My dad used to tell people he’d had a hysterectomy. He hadn’t. Obviously. He’d not even had a gastrectomy. They’d cut him open, poked around a bit and then sewed him back up. My first wife’s had a routine hysterectomy too apparently. So my daughter tells me. Apparently she haemorrhaged when she got home and nearly died. Not so routine then. Anyway I wasn’t going to talk about that. I was going to talk about the last time Carrie went in to have a lump removed from her nose. It was cancerous and had an ugly name which I forget and she’s napping so I can’t ask her. Before she went in she found videos of the surgery online and watched them. Who does that? My wife. Obviously. She wanted to know what they were going to do to her. That’s not me. So she knew what she was going in for and pretty much exactly what they were going to do and how long it would take and she made me stay home. She went to the hospital, had the surgery and came back ON THE BUS. I met her at the bus stop. I was allowed to meet her at the bus stop with her face all plastered up as if she’d been in a boxing match. And when we got home she made me photograph the whole thing. So we have a record. Before and after. I’m sure if she could’ve she’d’ve asked for a tape of the operation. I bet she thought of it.

Amazing, Jim. Remind me not to mess with Carrie.

Medical staff are amazing. When my wife was giving birth to our first child, there were a multitude of problems - inducement, forceps, that pesky umbilacal chord getting caught around baby's neck - and yet during all of this we were largely unaware of any issues, such was the staff's unflappable professionalism.

You're right though, it all boils down to numbers. I remember keeping track of the digits for both our two nippers. Good numbers and bad numbers.

Oh Ken, My heart is with you. I spent 5 months in various hospitals, hospices and nursing homes and the bugger still went and died. You have got your Patricia back and chewed finger nails are a small price to pay. I hope you won't ever have to repeat this traumatic episode in your lifetime and I send my love to you both. x