One Reason Why I Love Rehearsals 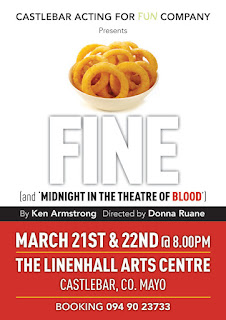 I love them for lots of reasons, really, but here’s just one.

When I'm writing a play, I’m always subconsciously, and sometimes consciously, acting them out. If there’s a fight, I’m fighting with myself. If there’s a love scene, the door is closed and there’s no entry. Every line - no, sod that - every word gets interrogated to see how it might play. Will it sound right? Will it hold the whole thing up unnecessarily? Will it fit in? It’s an intricate business.

Then, suddenly, there are actors.

It’s the gift of all gifts. The best thing in the world. There are real live people here who are willing to take on your lines and say them and breathe life and vigour into them.

They say the lines and they bring them to life, as promised. It’s absolutely brilliant.

But this is not the thing I love that I want to tell you about.

They say the lines wrong.

This is the beauty, the marvellous thing I love. Their voices, saying my  lines, are so often completely different to the ways I said them to myself in my head, back there in front of my computer screen.

At first, this is pretty scary.

“Wait a minute,” my brain, the original actor, mutters, “this isn’t right, that’s not how it’s meant to be said.” Then gradually, the magical realisation kicks in. It’s not as I did it. It’s better. The actors are bringing their own essence to the words and it’s almost invariably better.

Often it benefits from a little interaction. I’ve often got some low level stuff going on that might not be self-evident from the bare words. In rehearsal, I get to elaborate a little on that, if elaboration is called for. But, generally, the addition of a new voice, one with intelligence and some emotional experience, will bring sap and stickiness to the bare words and the truth will gradually seep out.

This has been just one.

Midnight in the Theatre of Blood and Fine will be performed by the Castlebar Acting for Fun Company in the Linenhall Theatre, Castlebar, County Mayo, Ireland on 21st and 22nd of March. You can Book Tickets on 094 90 23733.

The third play remains embargoed for the moment but it is brand new, deep in rehearsals, and will appear in the next few weeks, all going well.

So interesting to read about how a writer feels about actors' interpretations of their "babies". As you know, I always read your blog but this one, in particular, has "resonated" and I know will be of special interest to my son, Josh, who - as I think you're aware - is currently studying Performing Arts with a view to applying to RADA and/or LAMDA next year. It will remind him that whatever he is working on is the writer's very own "precious cargo" and those words should be handled with great care and commitment. So, as ever, thanks for writing the blog and, especially, thank you for addressing the subject so eloquently. I hope all of your three current productions will be enormously successful for you ... and, indeed, for the people who will be addressing YOUR words to the audiences. Best wishes, Ken - from Karen & Josh x

I’m reviewing a play at the moment, Ken, well, two versions of the same play, neither of which IMHO gets it right. One is a screenplay adapted by the author of the play and performed by award-winning actors; the second is a student production. There are bits I like in both versions but neither is what I’d call definitive. It’s a word that gets bandied about and it’s a dangerous word. One might suppose the definitive version might be one directed by the author and, indeed, the author of this play has directed it in the past but, and this is a problem I have with the theatre, no record exists of those performances. Besides who’s to say that a great writer—and he was a great writer—is going to be a great director?

The real problem lies on the page. I’m sure, like me, you’ve looked at many scripts and screenplays. There’s so little there I find. Occasionally a helpful hint—in the play I’m writing about there’s one “guffawing” and that’s it, other than that it’s just directions for movement—but never enough, just the bare bones. All you have to do is look at a famous speech like, “To be or not to be”—seriously how many ways can you say a little line like that? I wonder if Bill “Master of the Dramatic Pause” Shatner has ever done it. Oh, I just love YouTube.

Thanks Karen and Josh. Best wishes to you both. :)

Jim: You're right, there is often so little clue to be had on the script. I think one needs to retain some faith that the bugger who write it meant 'something' and then try and figure out what on earth it might have been. :)