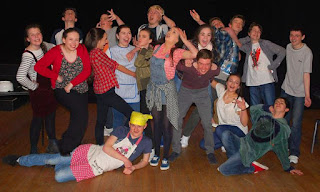 As you may know, last week was a great week for me in terms of my own plays being performed. It’s all over now but it was the best of good fun.

So, what did I do while my plays were actually on the stage? It’s happened to me quite a lot of times now so I have my preferred routines. I like to stay out of the way beforehand and, normally, when the play is on, I’m in a seat, preferably right at the back, watching to see what the audience does and when they do it.

This time around, though, I was a busier little beaver.

I’m particularly thinking of the double bill of 'Fine' and 'Midnight in the Theatre of Blood' which spent two fun-filled nights at the Linenhall Theatre in Castlebar. A word of highest praise for Donna Ruane’s ‘Castlebar Acting For Fun’ group who put in months of tireless and enthusiastic work to make this happen and who did the most excellent job ever.

I had a magic two minute interlude all to myself, before everything kicked off. I stood on the stage, the theatre was empty, the control room above me at the back, primed and ready to deliver its lighting and audio effects. I stood and I listened to the music coming over the auditorium speakers. Behind me, the dressing rooms were abuzz with anxious players. Out in front of me, the sold out audience were collecting their tickets and chatting expectantly in the foyer. Everything seemed a little heightened, humming with potential. The scribbling has brought everybody here. The scribbling had some little value.

I took on lots of stuff to do while the plays were actually being performed. There were lots of willing cast members who could have done it all and left me safely in my back seat but that wasn’t what I wanted from this experience. I wanted to be up and about, racing around, doing things, and that’s exactly what I got.

I was there at the side of the stage when the first cast got their cue to go on then I was back in the control room before the first line was spoken (that’s quite a dash). I was back down stage-side for the end of that play and helped Richie change the set for the second play. That wasn’t too hard, in fairness. Another entrance and another dash to the control room where I had various sound effects to perform on cue by banging on the wall. I had a large roll of insulating tape which I was using to make my bangs and it had worked good in rehearsal but, in the real thing, it soon became clear that the cast were not hearing my bangs so I dropped the insulating tape and hammered on the walls with my fists, causing a little personal damage along the way. Never mind, the cues were heard down on the stage. That’s all that mattered.

I stuck around in the control room to see the ‘dancehall’ scene and that left me another quick dash down to the side of the stage where I had my drum and cues all lines up. From where I stood, I could watch the little scene between Sean and Tess play out to its rather touching conclusion. As it ended, I was stood poised like a Japanese Kodo Drummer and, right on cue, I hammered it like there was no tomorrow. This was to create a live effect rather like what happens in the original movie version of The Haunting. I hit the drum so hard that I broke the drum stick but some people told me afterwards that they nearly lost their lives with the shock they got, so that again made the damage worthwhile. There was doors to rattle too. Stephen rattled the doors on the other side of the theatre and I rattled mine. It was spooky stuff.

Drumming and door rattling complete, I had to get right around to the most back-stage part of the theatre where a mirror ball was suspended on a rope high above the stage. My final mission was to manually lower it, on cue, into the lights.

It is the fate of some of us to dance out in the spotlight and to perform and to be admired. It is my happy, happy fate to lurk in the shadows and watch the things I write pass above me and beyond me. It is a shadow I happily embrace.

And then it was all over. At various times over the subsequent days, I would run into members of the cast. They all looked great and cool as they always do but there was a certain something… It was like they had been given some subtle super power for a while and now it had been taken away again. I felt like that too. For a moment, we had been allowed to be a part of a combined effort and, in that heady interlude, the thing had become a little greater than the sum of its parts.

Then it was gone.

Until the next time.

And therein lies the rub. Despite the effort, the element of grind in the long rehearsal schedule, the dull pain of it all ending, there remains a will, an imperative, even, to come together and to do it all again. Whatever part we play in the thing, whether it is to hide in the shadows of the wings or to dance out there under the hot lights, let’s make a date.

Let’s do it all again.

Oh Ken, I know the feeling of void after something that has been one's "baby" for so long and, doubtless, having poured one's heart and soul into your writing ... or whatever it is one does - I often knew the feeling when I was at the BBC and even more so when I was working at Management Consultancy. The hype is in the deadlines and once those deadlines have been met you have your entered your "baby" into the public domain which is a brave thing to do and one that I've never managed. Write tosh for the Radio Times to publicise Radio 2 - no problem. But MY baby is still on my computer and in lockdown for the time being.

You know what? Another "baby" will come along soon and the people who read your blog as well as everyone in the real world will think it's great and so the cyclical process begins all ove again. That your write so eloquently and beautifully can only work in your favour but it's always hard to let go, isn't it?