Seen That, Read That 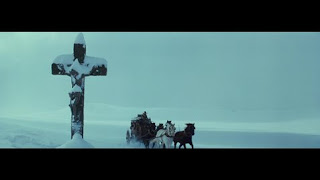 I watch quite a lot of stuff, movies and TV and such, and I read quite a bit too but I don’t usually go overboard with telling people what I thought of them. Occasionally, there might be a spare tweet. “I liked that” or “That was good.”

When things are disappointing, I tend to shut up about them. It’s only my opinion, after all, and if it’s negative, why bother sharing it?

At best, I’ll put you off trying something you might like and, at worst, I’ll start some heated discussion that I haven’t the least bit of interest in.

This week, though, as I’m trying to get my head out of the world of theatrical fun and back into the real world of trying to get the next stuff written, I thought it might be a sort of a palate-cleansing exercise to at least mention some of the bits and pieces I’ve been looking at and reading. I like it when other people do it because I often see them mention something that I think might be interesting and that puts me on to it. So I thought I might give it a go myself.

Revolutionary Road: This is the novel, not the film, though I’d like to see the film now. This was a bit of an odd one for me. I read the first quarter and was greatly admiring the writing, the insight, the ‘aptness’ of it all while, conversely, the book itself wasn’t doing it for me. All that good stuff just didn’t seem enough to keep me rushing back to a story that was so patently of another time. However, taking encouragement from some respected Twitter folk, I stuck with it. I’m glad I did. It’s a truthful book and it is also a sad and a hard book. But life can be like that, sad and hard, and maybe we need to see it reflected in the things we read sometimes. Every page seemed to say something real and true (I know, I sound like ‘Tangled Up In Blue’ now). As a document of disillusionment and disappointment, I’d find it hard to beat. That’s maybe not the most marketable review ever but there you have it.

Inside Llewyn Davis: The Coen Brothers film. Gosh but I liked this and so did my son Sam and he’s got excellent taste, much better than mine. It belongs to the ‘odd’ part of the Coen Brothers catalogue, I reckon. Llewyn is a man chasing his fate and his fate is Folk Music but, like that guy in that song about Rock N’Roll, he always seems to be one step behind the wave. There is a cat which drops in and out of the film at various times and it seemed clear that the cat was a metaphor for something or other. So, as I do, I spent some time after the film trying to see what that metaphor might be. So, getting a bit SPOILERtastic here, for a moment, I came to the conclusion that the cat represents Llewyn’s singing partner who had died or, more specifically, Llewyn’s guilt over the loss of his singing partner. He chases the cat, loses it, and chases it again. It is only in the penultimate scene where he kicks the cat back into the apartment, finally leaving it behind, that a new opportunity and a new potential may show itself, there in the darkened basement of the famous New York folk club. But, hey, that’s just me. I like a film that gets me thinking and that one did.

Cachet: My son had to watch this one for a paper he was writing. I watched it with him. This is a good few months ago now. I loved it. It’s obtuse and tricky but it’s all in there if you pay attention. It’s French and Michael Haneke directs. Keep an eye out for it.

The Hateful Eight: Watched this last night at home. As an aside, I’d like to assure you, gentle reader, that I paid full price for the privilege of watching it and I always do. No judgement implied. I was looking forward to this one, it’s my idea of an event. Tarantino and a big ensemble cast. I loved the look of it. The 70mm aspect ratio is beautiful in the external shots and the long indoor periods are set in a space that seems carefully designed to play to the wideness of the canvass. I loved the set up, the looking forward to seeing this meaty cohort facing off to each other both verbally and violently. I thought the violence almost veered into high comedy and I also thought that the writer/director must have had some unusually higher intent that I haven’t yet quite managed to fully grasp. If he didn’t, then it all seems so ‘gratuitous’ but it’s not that, at least I don’t think it is. There is something there about not believing all the stories we are fed and that someone is not necessarily good just because everyone perceives them as bad… like I said, I don’t know yet. I thought the script missed a trick or two, revealing something that would have paid off better had it been left to the end, where it was oddly revealed all over again. Certain things seemed carefully set up, a line painstaking created through the storm from the haberdashery to the outhouse, which seemed set for something wonderful and then which hardly featured at all. The business with the door was great though, it made me laugh, and the snow bound wooden crucified Christ in the title sequence, coupled with Morricone’s sombre fog-ridden score was filled with the best kind of cinematic anticipation.

10 Cloverfield Lane: Fun. Closed-in, tense, and 80% satisfying with John Goodman playing an absolute blinder. Sam and I had fun. We better not say any more about it. It deserves to be seen clean.

Oh, ‘Fingersmith’ by Sarah Waters, if you fancy something in the storytelling style of Dickens with a little added sauces. Rogues and villains, ladies and old perverts, betrayal, abandonment, love and lust and treachery and revenge and that’s just the first part.

At the moment, I’m reading The Buried Giant by Kazuo Ishiguro and maybe I’ll tell you how that goes, another time.

I just got an e-mail about an hour ago. Apparently I’m in the top 1% of reviewers on Goodreads. Not sure what exactly that means but I get a cool badge to stick on my blog if the mood suits me. Basically what I take from it is I’ve not read a book without writing about it in about eight years. I do it as a matter of routine now. For me it’s important because I forget so damn quickly what I’ve read and it’s a way to try to reinforce what I’ve read otherwise it’s all a bit pointless. There are few books that I don’t learn something about in my researches and I almost always come away thinking, How did I miss that? but that’s fine. I never read prose just for fun. I don’t even think I read comics just for fun. Reading is work but that’s not a bad thing; work is satisfying. I’ve just finished Ape and Essence by Aldous Huxley. Another dystopia only in this future they’ve all become devil worshippers because they think it’s him that brought about World War III. Learned a new word: pizzle— the penis of an animal, especially a bull, formerly used for flogging people. Who would even THINK to do something like that? Devil worshippers I guess.

I haven’t read Revolutionary Road but I do intend to get round to something by Richard Yates; it may end up being that. I think I saw the film. (See what I mean about my memory.) Haven’t seen Inside Llewyn Davis but Carrie is a big Coen Brothers fan so I expect we’ll get round to it. Haven’t seen Caché but I did enjoy Amour very much. Not sure if I’d go out of my way to watch Caché though. I’m not the biggest fan of thrillers. It’s an odd term if you think about it. I’ve never, as far as I can remember (always that proviso), read a thriller but as soon as I see the word in a review you’ve lost my interest. I can’t imagine me ever reading a novel by James Patterson or, say, Lee Child, names I found on a list online because (honestly) I couldn’t think of a single writer of thrillers off the top of my head. The Hateful Eight I’ll probably watch but only because Tarantino directed it. I’ve mixed feelings about him as a director but he’s never less than interesting. 10 Cloverfield Lane I’m looking forward to but then anything vaguely sci-fi interests me. Puzzles the hell out me why I’ve never written any. Probably because everything’s been done. Or at least that’s how it seems and then someone comes up with something new and you end up kicking yourself for not thinking about something so damn obvious first. I’m pretty sure Carrie’s read Fingersmith—she’s read most of Sarah Waters’ books—and we both watched the BBC adaptation but I can remember nothing about it, not even the dirty bits. I’d like to read The Buried Giant. I’ve not read any Ishiguro but I loved the films of The Remains of the Day and Never Let Me Go . He’s written some original screenplays too. Do you remember seeing a BBC drama called The Gourmet about a… well, a gourmet who, having eaten everything (including human flesh), sets out to find and cook a ghost? That was weird but an image of Charles Gray scoffing down some lightly-fried ectoplasm has stayed with me for some thirty years.