The Importance of Making Things Happen 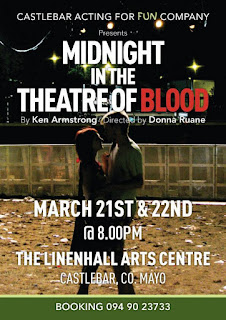 When I was a younger writer, I had no time for local matters. I was going to beat the world and all I needed to do was to write my stuff and lay it on the ground and the world would come and pick it up and embrace it.

And everything would be fine…

My writing went straight off in the post to the National Theatres and the Big Broadcasters. Nobody at local level had anything of value for me. I was getting out of town and I wasn’t ever coming back.

And it’s fair to say I’ve had my share of dalliances with the big boys. There have been plays on national radio stations in various countries, translations in far off lands, meetings and plans at the highest level of national theatres. Self-affirming stuff.

But, if I had waited…

If I had waited for the big boys to come and pick me up and make me shine, where would I be now? I don’t know. No place good, I reckon.

If you have faith, deep in your heart (as I’ll confess that I do) that you are good enough, then you need to aim for the stars. Go all out. Go for broke. Fear nothing.

While you’re waiting for the stars to get back to you, there are things you can be doing. Real, challenging, important things. And you can do them on your doorstep.

“Nah,” you say, just like I said ‘Nah’ for so long, “this one-horse town hasn’t got anything that can benefit me. These people are nice people but they are happy to sit mired in their own small town ways, knowing nothing for higher achievement and caring less.

You want proof? I’ll give you the proof. Look at yourself. Go ahead and look. You are in this one horse town and you don’t care to wallow in shit or settle for a lesser thing or play an inferior game in any way, shape or form.

You care. Deeply. And therein lies the rub because if you care this deeply then there are other people in this stupid one horse town that care just as deeply as you do. They’re out there. Just because they don’t live in the city that doesn’t make them lesser assets. They’re out there and they care just as much as you do and you have to go and find them.

I found them. Or they found me. I’m never sure which. The key thing is that we fairly quickly recognised each other as people who didn’t really care to fuck around or settle for inferior product. If we collaborate, as we do, the writer, the actors the producer, the theatre director, the designers, we want the result to be as good as anything anywhere in the world. Nothing less will do.

If you find the people who say, “it’ll do” or “it’s fine, it’s a small town” then my advice is to keep walking. Unless, of course, you’re one of those people too, in which case you can stay and have lots of fun at that perfectly good level. If you need to shoot higher, keep strolling.

I found what I need. I found people who will kindly tell me when what I’ve done is not up to standard, and encourage me to go back and try again. I found people who I can tell the same things to without it ever becoming petty or unprofessional. People who delight in doing things well and who are willing to sweat to make that happen.

And we do… make things happen. And the satisfaction of it all is almost unquantifiable.

You can sit and wait for the Big Show to come and claim you and I hope that some day it will. But maybe, like me, while you’re waiting, you can grow and learn and delight in the making of Drama or Art or whatever it is you do with the best people in the world, who are somewhere right there in your own place.

I know what I’ll continue to do.

There are stories of composers who've never heard their works performed live. Schubert, for example, as far as I know would have never heard his Ninth Symphony performed and definitely not The Unfinished. Suolahti—he’s a Finnish composer—never heard ANY of his own compositions performed in his lifetime. The first piece an audience ever got to hear was at his funeral. There’s a young composer in Wales called Owain Llwyd whose won the Urdd's prize for composition three times and the National Eisteddfod's composing competition twice and has never heard any of his orchestral works performed other than in his head. I’ve always felt a little sorry for composers in that respect. Playwrights can usually find someone to put on one of their plays because mostly they only require a handful of actors but imagine having to get ninety people together and not only ninety but the right mix; ninety euphoniumists wouldn’t be much use to man or beast.

If you talk to some of the greats—actors, writers, painters—I don’t imagine it’ll be long before the word “luck” creeps into the conversation. Persistence is a factor too but so often what made the difference was being in the right place at the right time. What I’m saying is not that they don’t deserve to be where they are but that there will be universes out there where they work in chip shops and do am dram in the evenings and are only stars in their dreams. To be honest there aren’t that many truly greats out there—the Judi Denches and the Meryl Streeps—who can turn their hand to anything but there are plenty of other who can do a decent job, far more than can get work. What I’m saying is that there are enough perfectly capable actors and actresses out there to put on any play you could conceive and deserve the applause at the end of the day. And I expect a fair number of them live in Castlebar and the surrounding area.

If I sell one book I’m pleased. If one person reads what I’ve written I’m pleased. They’ll spend a few hours on it and that’ll be it; it’ll sit on a shelf and be forgotten. You get a whole roomful of people to sit on their arses and pay attention to you and probably don’t use much more paper in tickets and programmes than I do printing a novel. I’d go for that. And on top of that you get to sit in the audience and experience the performance with them. What I’d give to be inside one of my readers’ heads! So I’m dead pleased you’ve having this success, Ken. And “success” is the word. What other word would you use?

That's a lovely comment, Jim.
Thanks. I must think the word 'success' more often. :)