Sticking to what I Know 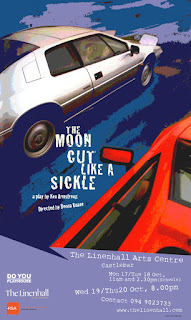 I’ve had such a great time with my motley collection of theatre plays over the last few years and next year is shaping up excellently too. It got me thinking and wondering a bit, which is not unusual.

I started asking myself whether I shouldn’t just stick to what I seem to know at least a little bit about.

Somehow, over the last ten years, I feel I have learned some stuff about writing for theatre. Of course I could be completely wrong and this post might just be the after-buzz of some excellent nights out watching my own words being played. But maybe it’s not. All the theatre I've done, the four plays I’ve acted in, the short plays I’ve written and directed, and the longer teen and adult plays, some of which have now seen a number of different productions. If only by osmosis, I seem to have got a feel for what might work in a theatre and what won’t. How long the audience’s patience can be tried, how to get the points across, how to make ‘em laugh and (much tougher) make ‘em cry.

Yes, the more I think about it, the more I reckon that the theatre space offers a language that I can express myself in.

And it’s such a rewarding thing, particularly for a guy like me who is a storyteller at heart. Storytelling seems harder to me when I am removed from the person who’s hearing the story. Things like prose and even Radio or TV involve beaming the story out into the ether and hoping that some meagre signal might, in some way, bounce back. Because storytelling is a two way deal, the listener subtly giving back something integral to the teller.

For me, the storyteller, the theatre can be an almost perfect place. Only, of course, when things are going well. When things are going badly, it’s another matter altogether and probably one for another day. My delight is to sit or stand at the back of the hall and take in the vista of the performance and the audience all together. In those moments when they become ‘as one’ it is almost like a dance and one that is lovely to watch.

Even on the nights when I am not in the room when a play is being done, I am always aware of it. Wherever I am, I am always thinking stuff like ‘they’re going on now’ or ‘they’re half-way through’. Always wishing everybody in the room, audience and players alike, good things.

There is so much good in it for me and yet still I don’t fully commit to it. I don't commit to it in several ways. Firstly, I am the world’s worst at sharing my plays and at making them generally accessible. One of the plays is on a national database and that is the play that has been performed the most. Another is published in a book and that is the second most performed play. Generally, productions come about because somebody has seem the play elsewhere or heard of it by word of mouth. It’s surprising to me that I get the amount of action I do from such tiny and tenuous links. I see other writers with neat, collated, online information about their plays and I know I should do the same… I know it. (Stops to make a note to do it) (But won’t).

That’s not the main thing, of course. The real way I don’t commit is by not writing the next play. Granted, I have written a new 15 minute one for next year’s Claremorris Fringe and I wait to see if I might be accepted. The entry is stronger every year and some of these years I won’t get in, that’s only fair. Apart from that though, I haven’t written a new longer theatre play in a while. I like to tweak the existing ones after some productions when improvements and gaps present themselves to me from the stage but that’s it for the theatre writing.

At the moment, I’m writing a new novel. I’m really enjoying doing it and I think it’s actually quite a good one this time. So that’s okay, right?

I haven’t proved anything to myself in the art of book writing, although I would dearly love to. Perhaps it just isn’t my thing. Perhaps I have more tools available to me for operating in the theatre environment. Perhaps my  desire to achieve the permanency of a book or three, as opposed to the transient, passing, nature of theatre, is keeping me from doing the work where I might actually one day make a serious impact on something.

I don’t have the answer. It’s just a question I ask myself when one type of writing is going well and I’m not doing very much of it.

I think it’s a game my head is playing with me. For me, writing a book is a constant battle against the urge to stop doing it. The anti-book-writing demons sit one my shoulder and tell me that I am not cut out for this game and that I should jack it in and go and write the next play instead.

I don’t think I’ll listen to them.

I think I’ll continue to take the time and get this new book to a presentable draft and then I will present it and see how the cookie crumbles from there. I know a book wouldn’t change anything much, except in my head. But it would change a lot there. It would be another major wall I'd have climbed.

Plus the thought of somebody out there curled up and reading a really intricate story I had created would warm me like the theatre plays do on those long evenings when I can’t be there.

Perhaps, when you write your novel, you must consider that the theatre it is playing in is the mind of the reader, their inner eye the stage upon which it is set. This means that you will have new tricks and effects to explore and to play with, but that may require that you get an insight into how the reader reacts when they experience your words for the first time - and, indeed, how they experience them when they return to read it a second or third time, each time drawing more deeply from the well of your creation.

I wrote once, “Content dictates form.” I then tried to explain what I meant by that. I often find myself in that predicament and sometimes I’m surprised by what I meant assuming what I’ve decided I meant is what I actually meant. Meaning’s a real bugger. I’ve written something in pretty much every form there’s out there bar film script or musical. I used to think of myself as a poet. Now I’m not sure what to call myself. Despite having written five novels and two novellas I find I’m uncomfortable with ‘novelist’. Having only two plays to my name (we don’t talk about The Normalpath) and neither having done more than sit in a drawer for ten-to-fifteen years (sounds like a jail sentence) I’m even less comfortable with ‘playwright’. I can tolerate ‘writer’; ‘author’ feels pretentious. When words come in my head I usually know immediately what form they’ll take. I knew after one sentence that Milligan and Murphy would be a novel and not just a short story. I’ve never started a poem and decided it ought to be a short story although once I did take a group of poems that told a story and tried to make a novel out of them. The end result will be on a floppy disk somewhere in the house. We don’t count that one either. My two novellas are both written solely in dialogue so there’s nothing to stop them being performed although I can’t see either working on a stage, radio perhaps. The older I get the less time I find I have for descriptions. They slow down the action like nobody’s business. My current novel is in four sections. The first is a third person narrative, the next two first person monologues and the final section a dialogue written as a script. The next novel is essentially a long letter. I never planned any of these. These were the forms that felt right. If I were you I’d follow my gut. There’s a need for all forms of writing and they all have their strengths and weaknesses. I’ve never found myself writing anything that I didn’t want to write. Novels are hard work. A part of me does sigh a little when I realise I’ve an idea for a book because I know I’ll be at it for years. That said the last three all dried up after a few pages which is why I ended up writing the novellas although I never actually planned for them to be novellas. I wrote until the words stopped and then counted the words. I have no idea what I’ll write next. I kinda like that. Kinda.

Writing could be a pleasant activity, but in the same time, as any intellectual activity, it is not effortless. Of course, you do not need to run or to put your health on trial, but the intellectual attention and effort required could equate in some cases the preparation for a marathon. As in the case of running, you need exercise and experience for successfully reaching your goals.   Author's Unite