That Was Some Theatrical Fortnight 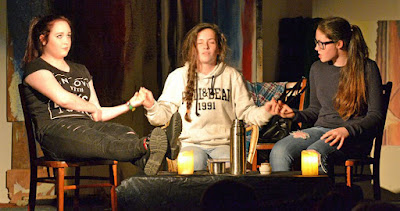 What a fortnight it’s been.

Two of my theatre plays had productions in the last  two weeks and I managed to get out on the road and see both of them. It was a very rewarding experience.

One of the many joys of my lucky life is seeing my little theatre plays performed. It’s not an easy thing for anybody to do, the putting on of a play. In fact it’s quite remarkably hard. For me to see so many great people put so much time and effort into something I cooked up here at this tatty little desk... well, it’s quite the compliment. People often say how they feel humbled when lovely things happen to them. I don’t, I feel buzzed and elevated and as high as a kite.

First up, nearly two weeks ago now, was The Hillside Players in Ardpatrick, Co. Limerick, who took on ‘Midnight in The Theatre of Blood’ for the Hallowe’en Season. Hillside are a well established group with a long tradition of great productions but this was their very first venture into Youth Drama. They didn’t do it in any half measure. The full body of the adult membership was evidently on hand throughout, mentoring, directing, producing, lighting and generally providing a remarkable back up network. They were rewarded with as large a cohort of talented and enthusiastic young people as I have seen. My compliments in particular go to them. They took on two plays for their show and the large casts in both required than many actors had to double up. That’s a lot of stuff to learn. A lot. The cast brought personality and fun and some genuine emotion to the evening and they all should be damn proud of themselves.

The good people at Hillside had a lovely seat for me right up the front and that was lovely… except I never want to sit at the front. My place is right at the back. There I can see what the audience is doing and that’s how I learn things from each production I see. Are there moments when my writing causes them to flag and look around? Where do they nudge their companion in a subtle acknowledgement that some small truth may have been told? Where do they throw their head back and laugh and, yes, where do they shuffle their bums and perhaps shed a little tear? It’s funny how I go along with the plays myself. Laughing and bum-shuffling. Just another audience member, delighting in the vista before me.

Hillside have some great youth actors and I hope that the two wonderful evenings they all created together will encourage them to reconvene next year to delight their audiences yet again. I was glad to be a part of it this year.

This week, then, it was on to Carnmore in Co. Galway for the second theatre production of ‘Conception, Pregnancy and Bert. This was originally written and produced as a radio play for St Patrick’s Drama Group in Westport. It went on the National One Act Theatre circuit last year and that’s were Compántas Lir saw it. Oisin Heraty drove down with me. It was he who directed it for Clann Machua Drama Group in Kiltimagh last year and we were both keen to see the new production. Little did we know the memorable nature of the evening we were driving into.

Even if nothing unexpected had happened, Compántas Lir put on a great show. The large community hall was replete with long tables and then we arrived, just barely in time thanks to a dense fog, the place was packed to the rafters with patrons seated along these tables in the expectation of good theatre, and cheese, wine, tea, coffee, biscuits and sweets at the interval. This was Supper Theatre. It was new to me and, boy, I liked it.

I could tell from the first play that Compántas Lir were seriously good. There was an attention to detail and a care with the material that stood out. Their audience came along with them all the way and the performances were brilliant such that, by the time the interval and the cheese came, the place was fairly buzzing.

As my own play started, I felt my usual tingle of anticipation. How would it all go for them? Okay, I hoped. I needn’t have worried. The players and the director has evidently worked and worked this production, tapping the sides of my script for every beat they could find. The audience quickly adapted to my slightly unusual approach to narrative and we were away and flying. It was going brilliantly and I could not have been happier.

Then all the lights went out.

The tables were candle lit so we weren’t in pitch darkness and the scene that the actors were in the middle of rather lent itself to the blackout. The cast continued through the scene, masterfully keeping the pace up throughout. Then somebody came on and announced that the entire area had suffered a power outage and there was no word, as yet, on when it might come back.  Nevertheless, the announcer continued, the show will go on. 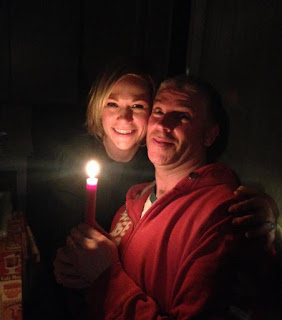 I said, a few paragraphs back, that I could not have been happier. That wasn’t actually true. When the play came back on, lit by torch and mobile phone light, with sound effects and music by the cast and a back beat from the feet of the audience, everything just seemed to go up a further notch. A production that was obviously excellent to start with became a sort of a communal effort which had immediacy and a frisson of something unique being in train.

None of that would have meant a thing if the production had not been so very strong. The performances and the direction were so adept that the technical challenges of the evening could never have caused the show to founder. In the end, I felt that many people in the audience went away thinking they had seen something special. I know I did.

So, thank you, to Hillside Players from Limerick and to Compántas Lir from Galway. Thank you for lots of things. For taking on my scribblings. For raising the tiny indentations on a page out and up to something magical.

For letting me continue to be a part of the making of theatre.

When Carrie was in the States last one of the things I watched was Maxine Peake’s take on Hamlet. Having seen David Tennant in the role only a few months earlier I couldn’t help but compare the two. Later I watched a documentary on the play which showed clips from Benedict Cumberbatch’s recent performance along with some others like Richard Burton and Derek Jacobi all trying to infuse something of themselves into “To be, or not to be...” I thought Peake acquitted herself well but it was hard to take the scene at the graveside seriously as she addressed a balled-up jumper instead of the skull of Yorick. But that’s the thing, no one performs Shakespeare any more, they interpret him. I suppose it must be like being able to see a reader’s thoughts as he or she is trying to figure out where you’re going in your novel and realising you said more than you intended and they’ve picked up on it. I’ve found that over the last ten months as I’ve been editing this book; there was so much subtext there and even at this late stage new things keep dawning on me and I find myself thinking, I wonder if I meant that? Eventually I’ll have to abandon it but not yet. It must be odd sitting in the audience watching a play you’ve written. It’s yours but not yours. Do you ever want to rewrite stuff after you’ve seen it performed? I think I might. Or maybe it’s a matter of compartmentalisation. You have to lock the writer-you in the house because no performance will ever be good enough for him.

It's funny you should say that, about rewriting. Both of the plays I saw recently have suggested small(ish) rewrites to me This is much more about me that about the productions I saw. Having seen each play a few different times, I can see a couple of places where the writing doesn't make the point as well as it could have done. I will go and and tweak them both, I think. :)