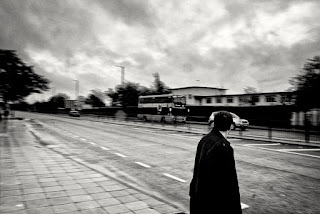 Our eldest guy has just set off back to University in Dublin. A friend’s little car, packed to the brim with students and rucksacks and laptops and headphones. His first year away is going very well. He’s embraced the oddity of being somewhere other that home and being largely responsibly for his own food and upkeep.

When he set off, a few months ago, I wrote a post about how his going reminded me of my own going and how difficult that had been, in many ways, probably due to my having just turned seventeen and having never been away anywhere before. Today it is his coming home that sets me thinking back to my own homecomings, all those years ago. The remembering instills a measure of empathy in me as I recall the bliss of arriving home very late on a Friday evening and the dull ache of setting off again far too early on the Sunday afternoon. Our dude isn’t displaying any of that that. He arrives with a smile and leaves with a smile, but I’d bet there’s a little lick of it somewhere.

For my own part, it is safe to say that I was homesick for a considerable part of my first year in college. Everything I reckoned I knew had been pretty much whipped out from underneath me and everything new seemed strange and oddly darker and colder than that which had gone before.

I loved to head for home on a Friday evening. I got in the habit of skipping the last lecture on the afternoon and seeing whatever new film was opening in or around the city centre. Then I could get a quick Quarter Pounder with Cheese and hop the waiting coach in the middle of O’Connell Street. The journey took about four and a half hours back then, with the first hour being a desperately slow trudge out through the suburbs of Lucan and Palmerstown. The windows of the coach were invariably steamed up on the inside from the mass of homeward bound humanity within. The coach driver (always the same man) had a limited supply of cassette tapes and he would start to run through them when we cleared Dublin and the radio programming became more erratic. I reckon I could still sing all of the greatest hits of, first, Rod Steward and, then, Kenny Rodgers in the exact order in which they played each and every week. By ten o’clock, the sounds from the bus stereo always seemed to become hazy and less coherent, as if the atmosphere above the Roscommon Curlews were not conducive to any kind of modern technology. Dozy, exhausted, glass smearing, naps were attempted and, well before Sligo was achieved, bags were pulled down and held on laps in anticipation of a quick jump from the bus outside of the police station.

From there it was an easy ten minute walk home. Dad would have come and met me but the arrival time of the bus was highly variable and there were no mobile phones to warn of our imminent arrival. It was just easier to walk. It was quite pleasant too. Even on a typically drizzly night, the terraced houses and distant church seemed to gain a heightened, other-worldly, aspect perhaps in the same manner as Tom Waits’ pronouncement that he "never saw his home town 'til he stayed away too long". Five days had been too long.

At home, the greeting was low key but highly pleasant. There was a prime seat in close to the fire and an excessive helping of freshly baked apple tart, a blob of cream, and a mug of over-sweet tea. I will fill in some details of the week, invariably accentuating the positive at every turn. Then the parents would turn in and I would have the warm living room to myself. I would stay up late to prolong the feeling.

Going back on Sunday was okay but really not okay at all. The bus was there again in the car park. My friends would sometime wave me off and I would quietly and burningly envy them their leisurely return to their homes and their native beds. In Dublin by half ten or eleven, there was a half hour walk up through north Dublin to get to the house where I stayed. I would go to bed almost immediately and listen to a Dublin radio station on my tiny black plastic clad transistor radio. I would fall asleep to a silly DJ playing smoochy requests for teen city lovers and so the count would begin.

I started counting down to the Friday bus right from the moment I arrived. Tuesday night was the cusp of the counting, where the uphill part was peaked and the downhill run could begin. With Tuesday night over, three sleeps had been completed and only two remained. Although the week was not yet half over, it could be made to seem like it was by clever counting like this and I did it all the time.

Of course it wasn’t all misery and homesickness and longing. There was good times and fun and learning and new friends. But, basically, at the back of it all, there was the distant call of home and the overriding desire to follow the Kenny Rogers songs back to there and then never to leave again.

I never went to university. It’s something I’ve always regretted, something I felt I missed out on that would’ve done me good; there’re plenty of things I missed out on I’m frankly relieved I managed to avoid. But I would’ve liked to have gone to uni. I’m the kind of guy who ought to have a degree. I’m the kind of guy who ought to be a professor by now. Maybe that sounds arrogant and ungrateful and who knows I might’ve hated uni and, like Beckett before me, not been suited to be a teacher. I enjoyed being an IT trainer but I never liked standing in front of a class disbursing knowledge. It didn’t matter that I knew what I was talking about I always felt a bit of a fake. That’s how I paint the Jim in my new book. He drifts into teaching and never quite rises to the challenge.

When I left home it was for good. It was supposed to be for good. There was no popping back for weekends. My first wife and I moved into a privately rented flat in East Kilbride and that was that. We were both working so we were flush and I guess that helped. Was I homesick? I was something sick but to be honest I was more annoyed than anything when I realised I was only a car drive or a phone call away and wasn’t going to be left in peace. For some odd reason I thought leaving home was escaping and it really wasn’t.

From the new book:

Home. There’s no place like it. It is one of a handful of words that means something different to each and every person on the planet. They say it’s where the heart is which is often true. What they don’t say is how the heart fares when it’s there. We may emigrate to the other side of the world but we all humph a chunk of home with us. For many the word brings comfort; it’s a nostalgia-inducing mantra that takes you away from the moment you find yourself in. Others flick through their memories like faded photos to see how far they’ve come and mostly they see they’ve not gone far enough. Home was the melting pot in which Jim learned the art of disenchantment. […] Home was where Jim was broken—and not just like they break horses, but that too—and there was no fixing him. He had tried thinking of where he lived now as home; he’d say the words, “I’m off home,” but it was just the place he ended up nights; it could never be anything more than the place where he lived. There are basic truths in this life it is hard to look past: you can’t normally lie to your wife unless she wants to be lied to, you can’t cheat the taxman for ever and you can’t go home and expect everything to be the same.