I Didn’t Have Time for This 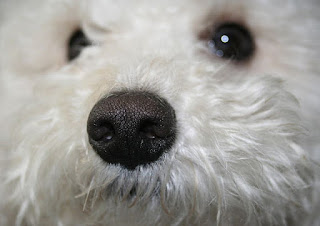 I didn’t have time for anything. This was just last Friday morning and I was rushing across the busy supermarket car park. I was hurrying back to my office because I had about ten different things to do and wanted to get them all done and that was patently impossible.

So I didn’t have any time to spare for anybody else’s troubles or woes or difficulties. I had to keep on plan, keep going.

Yet there, in the corner of my eye, was a trouble, a woe, a difficulty.

It was only a little dog, wet and muddy and bedraggled and evidently panicked. A Bichon Frise, albeit one very far removed from the coiffured blow-dry image one might hold of that breed. This little dog was running to and fro in the traffic, dodging under the advancing wheels of cars, stumbling, changing direction, then nearly getting squashed by the next set of wheels. It was the epitome of a little dog lost and nobody seemed to notice or care.

I noticed, and cared a bit, but I didn’t have time. I had to get these things done. If I got caught up in some pointless ‘little dog lost’ drama then I would lose any possibility of getting my things done. I couldn’t do it. A shame but that’s just the way it was.

I headed onward towards my office, the dog remained a tense white blur in my peripheral vision.

Then I thought about the window in my office.

The window in my office looks out on the car park. I imagined getting up there and looking out and seeing the little dog lying dead in the car park. Finally and inevitably killed by a mixture of panic and careless pre-Christmas driving.

I turned and went back.

The dog wasn’t easily caught. Its getting lost or abandonment or whatever it was had rendered it a little feral and it bared its teeth and snarled whenever I got close and implored it to come over. Each time it stumbled and ran off again, I feared I had driven it into the next car and played a part in killing it. It was this mounting fear that drove me to literally dive, full stretch, onto the dog and, in that way, rather harshly grab it.

I now had a soaking wet, squirming mass of canine existence in my arms, scrabbling mud and God know what else all over my coat. Where do I go now? What do I do with it? I was kind of at a loss for a little while.

I sought out Noel, the friendly car park man, to see if he could find me a strong piece of string. He pottered off to see what he could do while I wandered round with the ever-squirming dog, trying to pat him reassuringly without really having a spare hand to do so.

I should, as an aside, say, without bragging, that I am really good with dogs. I was brought up in a home where we always had dogs around and I like them and get on well with them. For that reason, this little fella didn’t present much of a problem to me. I held on to him, reassured him, and eventually Noel returned with some sturdy orange twine. I tied the twine around the dog’s collar – there was no name or address tag – and let him back down on the footpath, now safely on a makeshift ‘lead’.

As soon as he hit the pavement, an amazing change came over the little dog. Suddenly finding himself on the end of a lead, the little guy became sturdy and assured and really quite relaxed. He was obviously a dog that was used to being on a lead and, now that he was back there, the world must have seemed manageable and okay again. I walked him around for a bit, hoping that somebody might run up and claim him but that didn’t happen. It was time to get on the phone.

I called the Council Dog Warden’s office and they were very nice and helpful. They said that the warden would drive down and meet me in the car park in about fifteen minutes. So, for fifteen minutes, I walked the dog.

Many people stopped me and chatted, “Is it your dog?” or “Oh, you caught him, well done. I tried and failed.” The dog had stopped being something to ignore and had once again turned into something to admire.

The Dog Warden, a lovely lady, turned up in her little white van with the twirling vent on the top. She petted the dog and checked to see if it was electronically tagged. Quite a long shot, I reckoned. The little machine gave a warm beep. There, on the display, was the phone number of the dog’s owner. The Warden decided to take the dog back to base, check it over, and contact the number on the phone. She asked if I would like to know how it all turned out and I gave her my number.

A couple of hours later, my phone beeped like the tag reader had done. The message said, “Hi Ken. Charlie, girl dog. Home safe and sound. The owner wanted me to pass on her thanks to you. Laura dog warden.”

I didn’t get all my work done. I’m going in this afternoon to try to finish it up. I don’t mind. Stopping and helping the little mite was the best thing I did on Friday by a long, long way and it made me feel useful and worthwhile and better about things.

As is inevitably the case with these little things, I seemed to almost get more out of it than little Charlie did.

I’m not a dog person. You know this. When I have to drop off packages for the Missuses next door I don’t like it when their dog’s there—a less-than-one-year-old chocolate Labrador—because she’s a barker. I can tolerate her desperate need for attention but her barks frighten me a little if I’m being honest. If, like you, I saw a dog in destress I’d like to think I’d do the right thing no matter how much it barked. I’m not so sure I’d jump to if it was a person. I’m probably more wary of people than I am of dogs. Hell, I probably try and do the right thing if I saw a hippo in distress. It’s why we’ve allowed a cockatiel to destroy most of the picture frames in our house over the last ten years because what else were we going to do when he arrived at our windowsill? What do you do with homeless birds? I have to say I’ve never really thought about it. There’re places for cats and dogs but what about pigs and aardvarks? My mother loved all kinds of animals. She had less time for people. There was an honesty and openness to animals that chimed with her. People not so much. Anyway, I’m proud of you, Ken.

Animals touch our hearts in a way that humans can't ... and, even if someone isn't an "animal person", as in Jim's case - I like to think that in certain circumstances they can bring out the very best in us.

Sadly there are still people who are desperately cruel to animals. I'd imagine that they'd be pretty vile to other humans too but are probably cowards and abuse animals as they can't answer back.

Well done you and I'm glad that little Charlie is home and safe.

I started reading and a little voice in my head whispered, "It's okay. He'll turn around and get that dog. It's Ken. He wouldn't turn his back on someone/thing in need."

Thank you for doing the right thing, for the right reasons. (And not making me yell at the computer screen, "What?! What are you thinking? Go back and get that little dog before it becomes a white spot on the road.")