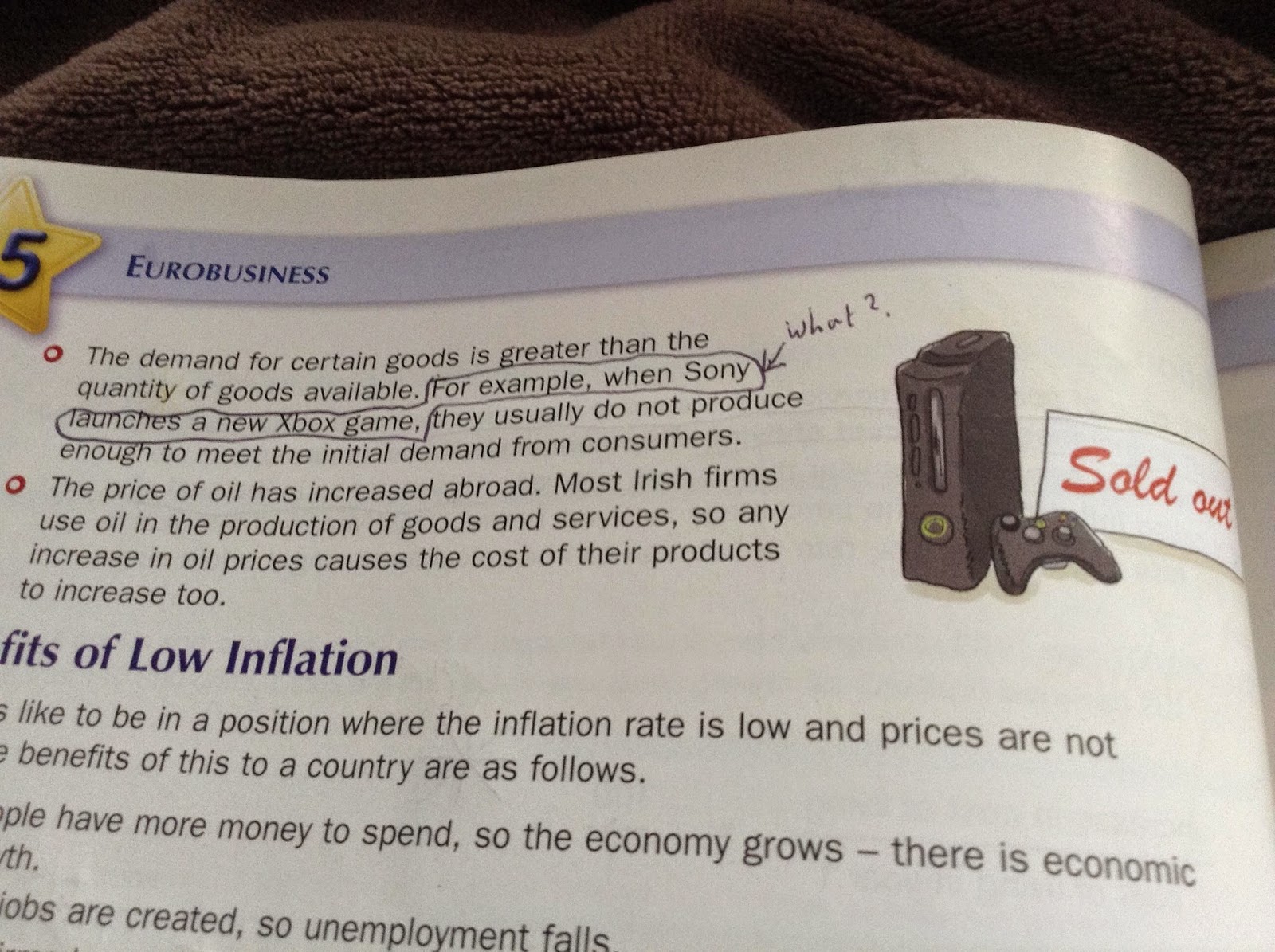 My youngest son, Sam, was doing his homework last Sunday afternoon. He’s fourteen, just so you know, and he likes to launch straight into the weekend when it arrives and pick up the homework debris after things cool down a bit.

So, yeah, there he was, doing his homework when he spotted something a bit strange in his business/economics text book. Here’s what it said.

“The demand for certain goods is greater than the quantity of goods available. For example, when Sony launch a new XBox game.”

And, of course, Sony don’t make Xbox, they make PlayStation. We all spotted that, right?

Sam got his pen and drew a cloud around this ludicrous statement and then wrote the word ‘What?’ beside it. Without telling anyone, he borrowed his Mum’s iPad and took a snapshot of it. Then he stuck it on a photo sharing website and submitted it to the gaming section of Reddit. Then he finished his homework.

After homework, he noted that 42 people had looked at his photo, an impressive tally by his standards. To celebrate he went to the toilet. When he came back 70,000 people had inspected the picture. This was about five o’clock in the afternoon.

At seven thirty, Sam’s older brother said to me, “Guess who’s got 400,000 hits on the Internet in the last few hours?” I couldn’t guess. It certainly wasn’t me. The photo had made it to the front page of Reddit and was the top thing there for a while.

All through last Sunday evening, I rather bemusedly watched the views on Sam’s photo sail effortlessly over the one million mark and onward into the night.

The next day, in school, word had somehow got around of the little ‘viral’ event. Sam got to explain his modus operandi to the economics class and earned himself a night off homework.

On Tuesday, the viewing figures finally levelled off at 2,309,000 and the rush was over.

It fascinated me more than a little bit. I had my own little rush one Christmas with a short story I posted called ‘Long Distance’ but it was nothing like the scale of Sam’s escapade.

To be honest, it scared me a tiny bit too.

It’s a thought I’ve had before. That when we play on the world wide web, we are generally paddling in the warm shallows with our friends and family. But the ocean is deep almost beyond measure and one wave, one undercurrent can carry you out from the warm shallows into darker uncharted waters  where shoals of fish teem and larger creatures lurk…

Let’s not get carried away. You know what I mean.

The photo attracted over 800 comments. Some people seemed to think that the picture was a clever marketing ploy by the Sony people, a manufactured mistake in a textbook to attract social media attention to the product…

Hi Ken,was reading your tweets about this, well done Sam. It's
a mind twister how many peeps viewed Sams' post. To begin with it was a good spot, to continue with he was the one who thought enough to make it public. It beats the times when we were young spotting mistake in movies etc, into a cocked hat.I can't help wondering if
secretly, getting one over on the writer of a schoolbook is as big a rush for Sam as his viral success, great feat nice one Sam
take care Ken
GH

Took me a good minute to spot what was wrong when you first posted this. Which I suppose is good considering I have never seen an Xbox or a PlayStation except in a box on a shelf in a shop or on some TV programme, usually the BBC’s Click which we watch faithfully. This week they were talking about Alien: Isolation. I am, as you may or may not know, a huge fan of the franchise but even the premise of this game wouldn’t be enough to persuade me to buy a dedicated gaming machine. Just as I’m not a big fan of action films I’m not a big fan of action games. I have a tablet and I do play games on that. At the moment I’ve been pulled back to Dropwords, a word game I enjoy, but for a while it was a snooker simulation that I couldn’t get enough of. I liked Tetris and Pacman when they first came out and I’ve had reasonable simulators in the past but nothing at the moment.

What I did enjoy doing in my early twenties was programming. I modified a game originally written for the ZX81 for the Spectrum—a sort of upside-down Space Invaders that was really quite addictive—but I only actually created one game from scratch set in the Holy Lands in which a guy wanders round trying to build up his spirituality and avoid sinning with temple prostitutes. Obvious goal is to get to heaven. It was simple but effective, had some basic graphics but was very playable. What I was particularly pleased about was the degree of randomness I incorporated into the game. Every game the map redrew itself and so even I couldn’t sit down and win easily. After that I decided to apply the same format to the film Alien. I never got it finished but I made a brave start and the graphics were much better this time but to get them in I had to copy artwork from the comic book adaptation into a grid and literally input every pixel line after line manually. Backbreaking work but I’d no idea how else to go about it.

As for the two millions hits that photo got. Wow. Now if only that many people clicked on something meaningful. But then I’m not a kid. Carrie and I started watching a show called The 100 last week. The premise is that a hundred felons (who just happen to be all good looking late teens and twenty-somethings) get sent back to Earth nearly a hundred years after the planet’s been ruined (and only those evacuated to a whopping big space station have survived) to see if it’s now habitable. And no sooner have they landed than they want to play. Only one or two seem to grasp how serious the situation they’re in is. And d’you know what? I found myself getting really exasperated with them. They were acting like little kids. I wanted to slap them.

I’m getting old. Having fun isn’t nearly as satisfying as it used to be. I get bored with it quickly. Which is probably why I like games like Dropwords because they take up ten or fifteen minutes of my time, give my mind a break and then I can get back to work. The idea of spending hour upon hour playing really doesn’t appeal anymore. I’m not sure it ever did that much. I’ve always got more of a kick out of work, creating things, developing things. It’s like when my dad bought me that electronic organ the first thing I wanted to do was compose. Yes I had to learn to play first but that was only a means to an end. I wonder how many kids programme nowadays. I know numbers have plummeted but I got so much pleasure out of making a computer screen do what I wanted it to do.

Yay for Sam! On two levels ... firstly for spotting an error and doing something about it and, secondly, for having such an in-depth knowledge about his gaming. It is always reassuring for me to know that there are other teenagers out there apart from my son who are hugely expert in the subjects that they love.

Congratulations Sam on proving a point I often make, "One person CAN make a difference."