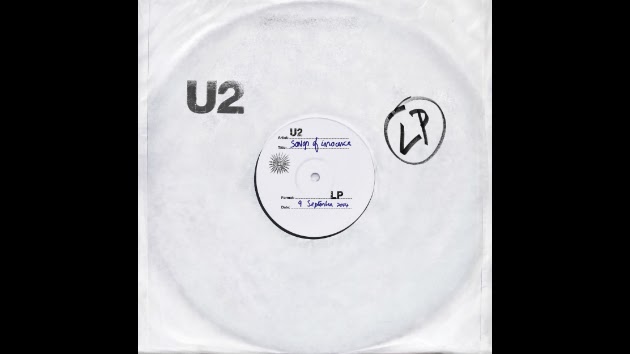 When the U2 album appeared, last week or the week before, I burned it on a CD and stuck it in the car stereo. Whenever the radio was annoying me or failing to enthrall me, I put it on.

I’m coming around to it now.

I never really like anything first time out, unless it’s some super-catchy riff with an instant hook.

At the moment, I like that ‘All About the Bass’ song but I will probably be completely fed up with it in a week or two. That’s the trouble with the catchy stuff, it wears off pretty quick.

Back to U2 though.

I’m not a defender of U2 or anything. There’s lot of their songs that I like and a lot that I don’t like. I also know how that front man fella has the capacity to annoy people, myself included, from time to time. When I heard some songs off this new album for the first time, they didn’t impact with me. They didn’t cause me offence or outrage or anything, they just didn’t click.

But that’s nothing new. As I was saying, songs generally take a few plays to get into my brain and settle there. It’s only then that I get a feel for whether I like them or not.

So, yeah, the CD has been played a few times now and I’m coming around to the songs. They sound similar to ones that have gone before but, still, some of them are pretty good.

What I’m saying here is completely true but I’m also trying to be a little bit provocative.

I was interested in what happened when the U2 album appeared last week, or the week before. I think it was a good example of something that occurs quite regularly now, something that we perhaps should be a little bit concerned about.

Basically, people hated the U2 album.

But why be concerned about that, Ken? People are allowed to like or dislike things as they see fit. They are also allowed to express their opinions openly and without fear of reprisal. This is a situation  to be celebrated and staunchly defended.

Of course it is.

People hated the album in the very moment it appeared.

Of course there were mitigating factors in this particular instance. The album was perceived as having been forced onto people’s entertainment devices by a corporate entity. That fuelled the hate a bit. Also it’s ‘U2’, with the stacks of baggage that they and their front man have hauled along through the last few decades.

These are reasons which made this a grander and more visible ‘blind hating’ that most of the ‘blind hatings’ we have previously seen. Still, though, it’s an interesting and, to me at least, a rather scary example of the phenomenon.

What phenomenon, Ken, what are you on about?

I told you. People, en masse, hating a package of songs without having taken a moment to listen to them. Doesn’t that scare you even a little bit? I mean it’s not about the songs, fuck the songs. People coming together and hating a thing and the only knowledge they have of it is the propaganda and their own prejudices. Doesn’t that ring a bell at all?

People do well if they are part of a group. This is true in life and doubly-true on Facebook and Twitter and such. It’s can be a cold isolating place, that Social Media, and people long for common ground and shared experience on which to rest and warm themselves a while. If you don’t believe me, look at any statement made on Facebook and then look at the comments beneath. The vast majority of those comments will be in concurrence with the original statement. A few argumentative types, sure, but, generally, people with be supporting the original statement, making themselves part of a little cohort. Belonging.

It’s only natural, I suppose.

It’s a shame, though, that the easiest gangs to belong to are the ones which dislike things. It’s easier and safer and warmer and more comfortable to dislike things. You don’t have to defend a dislike. You just have to run with the pack and feel their hot breath on your neck.

I’m getting carried away now and I know I am. And, before you start, it’s not about bloody U2. Hate them all you want, I couldn’t care less. It’s a free country. Go for it. Knock yourself out.

Just consider one thing for me.

Before you decide you really, really hate something, why not try it?

Of course, if you have a strong instinct that you’re going to hate it (Semolina, Cauliflower) you don’t have to try it but, if you don’t ever give it a go, then don’t run around publicly hating on it. Just disregard it.

There is warmth and companionship to be found in being among the people who like things and even, perhaps most wonderful of all, the people who disagree with you about things.

I’ve completely gone off U2 now.

Anybody got any Coldplay?

I used to be a fan of U2. I'd Boy, October, War, The Unforgettable Fir, The Joshua Tree and Rattle and Hum and then Achtung Baby came out and I’ve no idea what was happing in my life circa Nov 1991—I’d’ve been 32 so I would’ve been going into my second depression—but I never really listened to U2 after 1988. And that’s happened with other bands. The only two to have survived all these years are Fish (I loved the first few Marillion albums after he left but without him they kinda lost me) and Pink Floyd (dead excited about the new-ish album).

I think the problem you’re talking about here is a common one. I was listening to Elvis Costello a while back—some TV concert—and I got half a dozen songs in and started to lose interest. Okay he was older and stouter—aren’t we all?—but there was nothing wrong with his voice. It was the songs. I didn’t know them and I didn’t much care for them. I wanted ‘Oliver’s Army’ and ‘(I Don't Want To Go To) Chelsea’. I wanted the hits. But the hits only cover a fraction of his output. He’s been on the go since 1977 and who of us is the same man we were back in 1977 (assuming we were men back in 1977)?

The problem is one of accessibility. The early singles by most bands are immediately accessible. They’re catchy and punchy. And then they start putting out albums with tracks we have to listen to more than once to get unless they’re Pink Floyd and every single track is a work of genius. But even there have to listened to their solo albums? They’re good—how could they not be good?—but they’re not Pink Floyd.

They’re like books. Some books are page-turners and others require a bit more effort. Some people’re willing to put in the effort—and are subsequently rewarded—whereas others give up and move onto someone else and there’s always a someone else. I find the whole concept of the ‘acquired taste’ an interesting one. It’s why I stick on Glora Coates every now and then when my wife’s not around (she’s asked me to take her off in the past). Coates is a postminimalist composer whose mature works consist substantially of glissandi and they’re hard work but this woman’s been digging her own furrow since 1950—so a lot longer than U2 and the rest—and winning awards and dodging plaudits and I don’t get why because some of her stuff is almost unlistenable to. But I hate to be beaten. I want to hear what she hears. No one writes music they hate, not deliberately—with the possible exception of Lou Reed’s Metal Machine Music—so it must be me.

And I take this same view with all music. I’ve listened to artistes looking back on long careers and being embarrassed about certain phases. I bet they weren’t embarrassed at the time. But their ears have grown up too and what they thought of as their best work at the time they now realise perhaps wasn’t up to much.

I hate the mob mentality—one of the scariest words I ever discovered as a kid was ‘mobocracy’—but I do get it and it’s hard to go against your peers especially when you’re young. I was quite lucky as a kid in that my musical tastes were very broad. I went to the record library on Saturday and picked up my classical LPs and then on Sunday I’d sit there with pen and paper and copy down the entire Top Twenty or Thirty or whatever it was back in the 70’s. That doesn’t mean I haven’t made snap judgements in my time. I recall coming into East Kilbride one morning in the car and ‘Angie’ came on for the first time—so we’re talking August 1973—and I said I hated it. I did hate it the first time I heard it but it grew on me. Now I think it’s one of Richards and Jagger’s best but there you go. I was young often spoke before my opinions had properly formed. I did the same when boots—I suppose you’d call them ankle boots—became popular for guys in the early seventies and then changed my mind but refused to get a pair on principle not that anyone would’ve remember what I’d said or cared.

Jim: I have this image of you in ankle boots now. Sleep may not come easily. :)

S: I remember it very well. :) We were stood down the back wondering 'what's this shite?' when Shane collapsed onto us after a session up the front row, "they're Brilliant, lads'. :)

Haven't listened to it yet only because I'm not a fan...based on prior listening experiences. But I am a fan of your "How can you hate before sampling it?" club. It's easier to complain, than say thank you. Social media has made it easier to yell, "Yeah, me too!" without backing it up.

I once did a social experiment with a group of high school kids. I told them most people voted on a candidate based on one 30 second sound bite. So I gave them four "candidates" to choose from, based on 30 sound bites. I managed to make 3 of America's founding fathers sound like crazy people by using obscure facts about them, which led the group to vote for...Richard Nixon, who I made sound like a saint by using one of his own quotes which became prophetic: "The man who is dishonest will be caught."