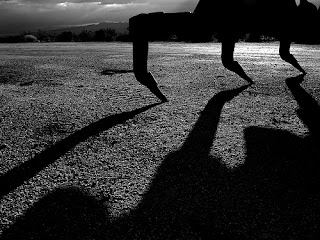 This week I injured myself with a bin liner. I’m looking at the bruise now as I type this. It’s quite sore.

This reminded me that I tend to do this quite a lot. I injure myself in silly ways. I've been doing it for years and have actually got quite good at it, even if I do say so myself.

So how do you injure yourself with a bin liner, Ken? Eh?

It’s easy, really. You know how they come in rolls? Bin liners, the tough black ones. Well you unroll one and you persuade yourself that you've found the perforations between that first bin liner on the roll and the next one in. So you grip the roll, with one hard either side of this perceived-perforation, and you give it as big and as brutal a chuck as you can, to tear the first bag off, to put in your bin. Except it isn’t the perforation, is it? It’s all part of the same bag and you pull so hard that your fingernail gets pulled clean off cos it was snagged in the bin liner. Then you dance around and swear a bit until your lovely wife turns up and quietly enquires as to what you have done to yourself this time? You know the scenario. No, of course, you probably don’t.

The bin liner thing was mild, although you wouldn’t have known that from hearing the roars and shouts that came out of me when I did it. In the scheme of things, though, it was small. I’ve made a career out of giving myself silly, cartoon, injuries.

When I was younger, many of these injuries seemed to stem from trying to do things far too quickly. I’ve referred to it before somewhere in these posts but my trademark silly injury, back in the London years, was for me to close the car door on myself before I’d got myself fully into the seat. I was always rushing around in such a tizz, I used to jump into the driver’s seat and slam the door but I would do it so quickly that I wasn’t actually fully in the car, the result being that a leg or an ear or some other appendage would get nipped. It was sore and embarrassing and I have it on good authority that it looked incredible silly when viewed from the street.

Now, in later life, the silly injuries seem to come much more from lack of attention than from speed of action. I can’t seem to cook anymore without cauterising myself. This usually relates to the extremely high moisture-content of whatever tea towel I selected to extract the pan/branding-iron from the oven. If it’s not that, it’s the special pot we paid a lot of money for, the one where the handle is exactly as hot as the hottest part of the bottom of the pot.

But leave all that aside. There’s a zenith. A ‘Daddy of All Stupid Injuries’, an undisputed champion, and, in my life, I have done it twice. Not once. Twice. That’s how good I am. You’ve seen it in cartoons and probably on old ‘Three Stooges’ shorts. You’ve thought it was quite funny. I am here to tell you that it isn’t. It isn’t funny at all.

It is of course ‘Stepping On a Rake’.

Think about it. Think.

The key to the true horror of stepping on a rake is that you do not know you have stepped on a rake. If you had seen the rake lying there on the lawn, prongs skyward, you wouldn't have stepped on it. You would have sashayed to one side, pointed knowingly and grinned in the window at your long-suffering wife (who is still cleaning up the mess from that dinner you burned). No. The awful thing is, like that shot that will kill you, you never see it coming. One minute you are out walking your land, like your man with the Golden Retriever from Downton Abbey, the next you have been smashed as hard as you can be smashed, right on your nose.

What was it? What hit you? There was no assailant, there was nothing. As you crumple to the floor you imagine some H G Wellsian invisible fugitive or perhaps a team of super-skilled Ninja warriors intent on stealing your garden implements. Wait. Garden? It was that stupid rake again, wasn't it? Oh God, no. Now the embarrassment sets in, the feeling of stupidity. “You've stepped on the rake again, you twat.”

All of this is so terrible; the unexpected nature of the assault, the burgeoning shame. But it’s the third part that’s the worst.

That, right there, is the worst part.

I wouldn’t say I’m especially clumsy and I certainly don’t think I’ve ever stepped on a rake but then that would involve being out in the garden and I don’t do gardens. I did as a kid I did and there were times when rakes were lying around begging to be stepped on but I pretty much avoided interacting with them even in the ways recommended by the manufacturers. I wonder if rakes come with instructions these days. You know the kind of instructions I’m talking about: This is a tube of glue so don’t ingest or pour in your eye. IF you happen to ingest or pour in your eyes then do this. So I suppose the instructions for a rake would include: don’t leave lying around on the grass, prongs up in case some Irish pillock steps on them because they do that you know.

As an aside, as you take an interest in these things, since I started reading your post the bird’s been screaming at me. Not the car alarm but just a persistent Yeep! …. Yeep! ….. Yeep! …. Yeep! Does make reading rather hard. So I’ve stuck on a booming soundtrack (Eagle Eye in case you’re interested) which he’s taken as a challenge and decided to fly around the room shrieking. I’m ignoring him and getting on with this. At the moment he’s sitting atop the print of the cow’s head yeeping away and failing to get any attention. Assuming he’s looking for attention. Hard to figure out what sets him off some days.

But back to garden accidents… I did electrocute myself once. Dad decided to add a motor to an unsuspecting lawnmower and, much to my amazement (me being as mechanical as a pot of jelly (best I simile I can come up with on a Sunday afternoon, sorry)) he managed it. The catch was you had to pull the plug from inside the garage first and NOT the mower and, of course, that’s what I did. I think that’s the only time I’ve ever been electrocuted. It was an interesting experience—we poets do like interesting experiences—but not one I’d care to repeat.

Just saw the news about David Frost. Christ, they’re dropping like flies this year. (Bird now on the top of the door giving me the evil eye.)

I'm always cracking my skull on the extractor fan that sticks out a bit too far.

Never stepped on a rake, but at school once I was trying to peer through a door window into the sports hall, where reheasals for the school show were taking place. I couldn't see a thing through the blackout curtain, including the kid who burst through the door, smashing me in the face.

I am truly sorry about your bruise but have to admit to hearty chuckling whilst reading your blog which almost always provides a very good start to a week.
I can sympathise with you regarding being injured in the various manners you described. I broke my right ankle about 5 years ago and had to give up extreme sports.
Please don't tell anyone that the extreme sport in which I was participating was walking from the Post Office to Waitrose. Am never going to do that again.